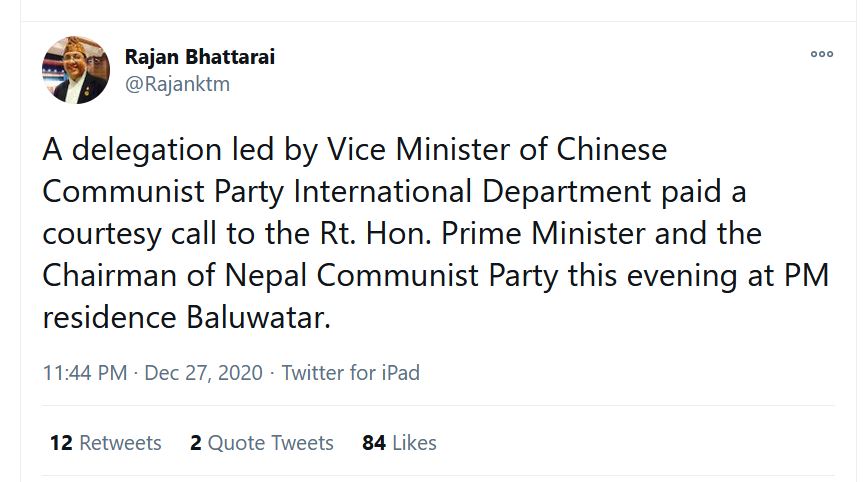 A delegation led by Guo Yezhou, vice minister in the international department of the Communist Party of China met with Prime Minister KP Sharma Oli on Sunday evening following their meeting with President Bidya Devi Bhandari as soon as they landed in Kathmandu.

Guo and his delegation was accompanied by Chinese Ambassador to Nepal Hou Yanqi to both the meetings.

Rajan Bhattarai, Foreign Affairs advisor PM Oli, confirmed that the Chinese team had meet with the Prime Minister but fell short of giving any details related to the agenda or objective of the meeting.

Similarly, the Office of the President has also not unveiled the meeting’s agenda.

China has poured millions of dollars into Nepal in recent years in the form of aid and infrastructure investment as it incorporates the country in President Xi Jinping’s Belt and Road Initiative project, which is seen as a new Silk Road.

Yezhou is the most senior foreign official to visit Nepal since Prime Minister Oli decided to dissolve the Parliament last Sunday and call for an early parliamentary election.

The move triggered deep political unrest and street protests as the country grapples with the COVID-19 pandemic, and left the ruling NCP on the verge of a split.

“I think the Chinese have come to assess the overall situation after the dissolution of parliament and virtual break-up of the Nepal Communist Party,” said Narayan Khadka, a senior leader of the opposition Nepali Congress party.

Bishnu Rijal, a central committee member of the NCP, said the Chinese official was expected to meet Oli and his opponents.

Oli has said that internal squabbling and a lack of cooperation from his party affected decision-making, forcing him to seek a fresh popular mandate.