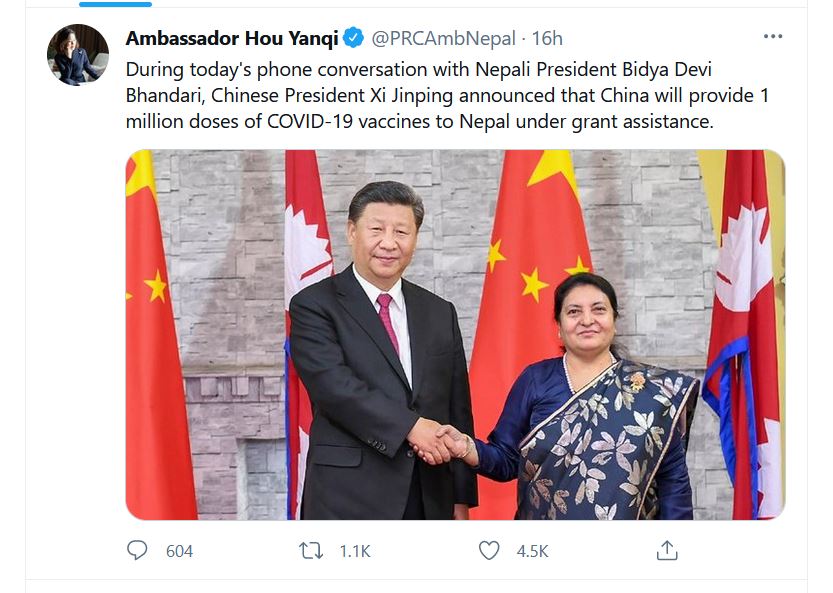 China will provide 1 million doses of a COVID-19 vaccine to Nepal, its ambassador said on Wednesday, as authorities in the Himalayan country scramble to secure shots amid a surge in infections that has overwhelmed its rickety health system.

The announcement was made during a telephone conversation between Nepali President Bidya Devi Bhandari and her Chinese counterpart Xi Jinping on Wednesday, China’s ambassador Hou Yanqi said in a Twitter post.

Nepal began its vaccination drive in January but the campaign has been suspended because of the lack of vaccines after New Delhi said it was unable to provide additional shots due to its domestic needs.

China and India jostle for influence in Nepal, a natural buffer between the Asian giants, and both have been giving away COVID-19 vaccines as part of a diplomatic push to strengthen ties with neighbours and countries further afield.

Neither Chinese ambassador Hou nor Nepal’s foreign minister, Pradeep Kumar Gyawali, gave a timeframe for delivery of the latest give donation of vaccines.

Nepal has been hit by a sharp surge in COVID-19 cases since early April. The average daily rise in infections is now about 8,000, compared with fewer than 200 a day two months ago, leaving hospital beds, oxygen and medicines in short supply.

Nepal has also procured 1 million shots of vaccine in a commercial deal with the Serum Institute of India, in addition to 348,000 jabs it received under the COVAX initiative.