DHAKA, Dec 4 (Reuters) – More than 1,600 Rohingya refugees sailed on Friday from Bangladesh’s southern port of Chittagong for the remote island of Bhasan Char in the Bay of Bengal, a naval official said.

The south Asian nation says it is only moving refugees who are willing to go and that this will ease chronic overcrowding in camps that are home to more than 1 million Rohingya, members of a Muslim minority who have fled neighbouring Myanmar.

But refugees and humanitarian workers say some of the Rohingya had been coerced into going to Bhashan Char a flood-prone island that emerged from the sea 20 years ago.

The naval official said the Rohingya were aboard seven boats, with two more carrying supplies.

Pictures taken from aboard one of the vessels showed refugees lined up on blue plastic chairs under the watch of uniformed sailors. 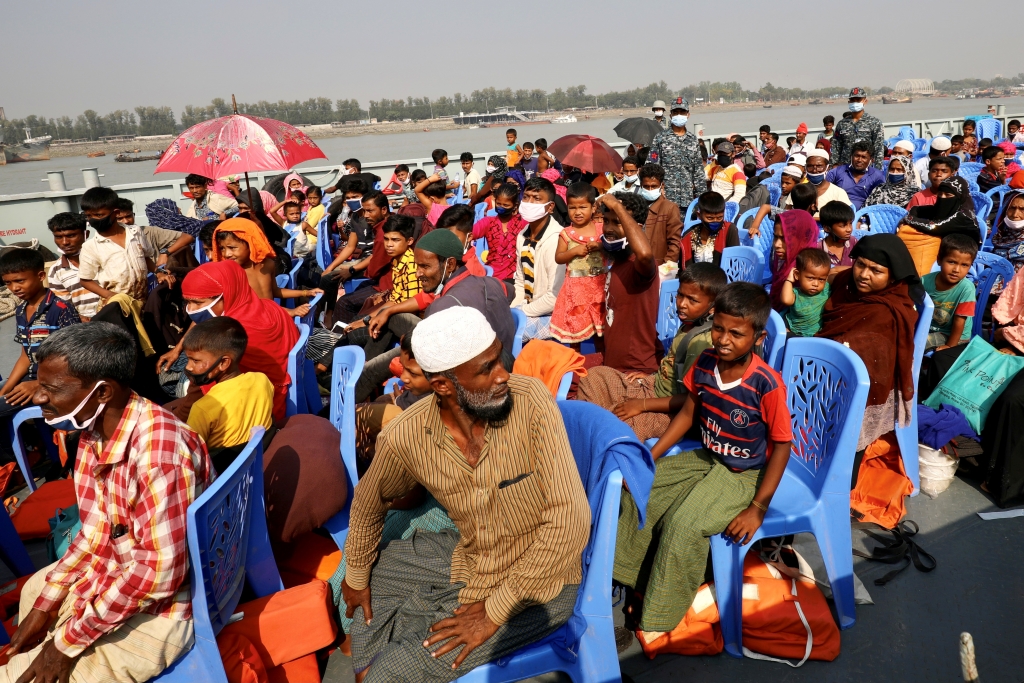 Rohingyas are seen onboard a ship as they move to Bhasan Char island in Chattogram, Bangladesh, December 4, 2020. REUTERS/Mohammad Ponir Hossain

“The government is not taking anyone to Bhashan Char forcibly. We maintain this position,” Foreign Minister Abdul Momen told reporters late on Thursday.

But two Rohingya being relocated told Reuters their names appeared on lists compiled by government-appointed local leaders without their consent, while aid workers said officials used threats and enticements to pressure people into going.

“They have taken us here forcefully,” a 31-year-old man told Reuters tearfully by phone as he boarded a bus from the camps near Cox’s Bazar. “Three days ago, when I heard that my family is on the list, I ran away from the block, but yesterday I was caught and taken here,” he said.

An 18-year-old woman said her husband had put their names on the list thinking it was for food rations. He fled when they were told to go to Bhasan Char, she said, adding that she is also hiding in the camp.

They were among more than 730,000 Rohingya who fled Myanmar in 2017 following a military-led crackdown that the United Nations said was executed with genocidal intent. Myanmar denies genocide and says its forces were targeting Rohingya militants who attacked police posts.

Human Rights Watch said it had interviewed 12 families whose names were on the lists, but had not volunteered to go, while Refugees International said the move was “nothing short of a dangerous mass detention of the Rohingya people in violation of international human rights obligations”.

Two aid workers, who spoke on condition of anonymity, said refugees had come under pressure from government officials who used threats and offers of cash and other enticements to persuade them to go to the island.

The United Nations said in a statement it had been given “limited information” about the relocations and was not involved in preparations.

More than 300 refugees were brought to the island earlier this year after several months at sea in an attempt to flee Bangladesh. Rights groups say they are being held against their will and have complained of human rights violations.