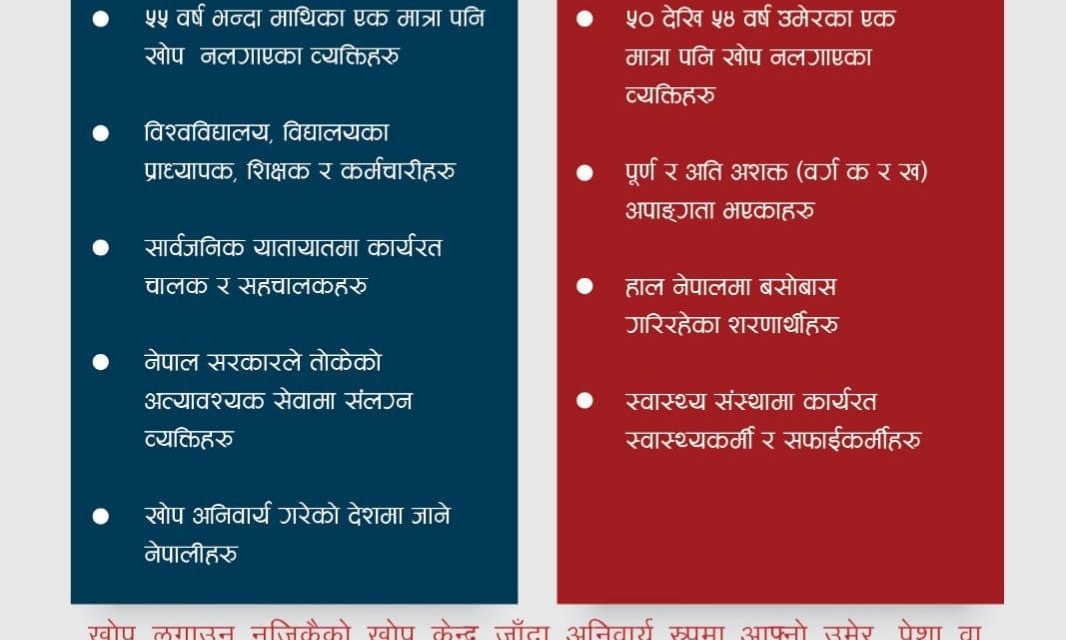 The government is all set to administer the recently arrived 800,000 doses of the China-made Vero Cell vaccine in Bagmati, Gandaki, Lumbini provinces from today.

Nepal government has signed a non-disclosure agreement with the Chinese vaccine company Sinopharm to purchase 4 million doses of Vero Cell vaccine. Of which, 800,000 doses arrived in Kathmandu on July 9.

Remaining vaccines will be brought in other batches by July 23, as per government officials.

According to Vaccine Storage Branch Chief Badebabu Thapa, as many as 114,000 doses of the vaccine have been sent to Lumbini; 112,000 to Gandaki and 82,000 to Hetauda to be administered in Makwanpur, Sindhuli and Chitwan districts of Bagmati province.

Thapa said that vaccines would be sent to other provinces as soon as they arrive from China in the near future.

Head of Vaccination Division of the Health Services Department Dr Jhalak Sharma Gautam informed that the state and district level vaccination coordination committees were delegated the responsibility to decide where and how many vaccination centers should be set up in their respective areas.

He added that people aged 55 years and above, who have yet to receive their first dose, will be administered Vero Cell vaccines this time.

Similarly, professors, teachers and staff at universities and schools, public transport drivers and their helpers, essential services providers, and abroad aspirants going to countries where vaccination is mandatory will be prioritized in this phase of inoculation.

Earlier, migrant workers heading abroad for employment had demanded to be vaccinated, stating that that unvaccinated people were forced to pay expensive prices for quarantine and other services in foreign lands.

Meanwhile, the US-made single-shot Johnson & Johnson vaccines will be administered to people between the age group of 50 and 54 years.

Likewise, people with ‘A’ and ‘B’ category disabilities, refugees along with health workers and sanitation workers who missed out on previous vaccination drives will be administered the Johnson & Johnson jabs.

Gautam informed that the government will begin administering Johnson & Johnson vaccines within sometime this week. “The exact dates to send these vaccines to various provinces and the number of vaccines to each province have yet to be decided. But the vaccination drive will start within this week,” he said.

As per Gautam, people of eligible age group will be required to show an official age certificate (citizenship, passport, driver’s certificate, educational certificate and if not, age certificate from the municipality, ward), to be able to get vaccinated.

Similarly, people from other priority sectors and professions should procure their professional ID cards to be able to get the jabs.