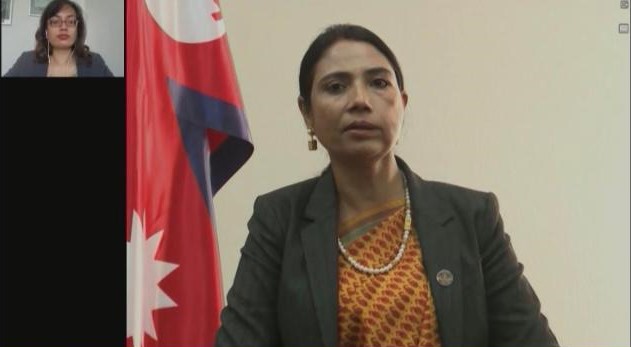 Addressing the 65th Session of the Commission on the Status of Women through a pre-recorded video on Tuesday, she underscored the structural barriers and challenges hindering women’s effective participation in public life called for an enhanced level of international support and cooperation towards the achievement of the gender-related SDGs by 2030.

She highlighted Nepal’s major achievements made in the field of gender equality and women empowerment.

Equal lineage and property rights, safe motherhood and reproductive health rights, and women’s right to participate in all State structures are ensured in the Constitution based on the principle of proportional representation, she stated.

She reiterated Nepal’s zero-tolerance policy on gender-based violence and stated that recently enacted National Gender Equality Policy 2021, Acid and Other Lethal Chemical Substances (Regulation) Ordinance, and the Ordinance to Amend the Penal Code and Criminal Procedure Code are expected to be instrumental in establishing gender friendly governance at all levels.

Mahato underlined the significant increase in the representation of women at the elected posts of the federal, provincial, and local levels and expressed Nepal’s commitment to ensure gender equality and women empowerment thereby eliminating all forms of discrimination against women.

The 65th Session of the Commission on the Status of Women is being held from 15-26 March 2021 under the theme of ‘Women’s full and effective participation and decision-making in public life’.

Meanwhile, though Nepali politicians know exactly what to say at international platforms, they are slow-witted when it comes to implementation of laws at home.

Survivors of gender-based violence as well as their families have to go through an awfully long and grueling legal as well as bureaucratic procedure to get justice, while women in leadership positions are used as mere tokens.

To fill the quota of 33 percent women’s participation, political parties nominated more female representatives under the country’s system of proportional representation in 2017.

However, during the 2017 local elections, women secured only six out of 165 seats at the House of Representatives.

They also fared badly at constitutional assembly elections despite gaining traction at these since 1999, when women only made up 5.8 percent of the elected members.

Ashmita Khanal, a researcher in the field of governance, said, “When I traveled through eastern Nepal for my research, I found that almost all deputy-mayor positions are held by women while all mayoral positions are occupied by men. Not to undermine those women who get to powerful positions with their determination and hard work, but it is also true that the quota for women in political positions are only for tokenism.”

In terms of female representation in Parliament, Nepal ranked 48th on a list of 193 nations in 2017, according to a report prepared by the group Women in Politics. The same group ranked Nepal a lowly 169th in terms of how many women hold ministerial positions.