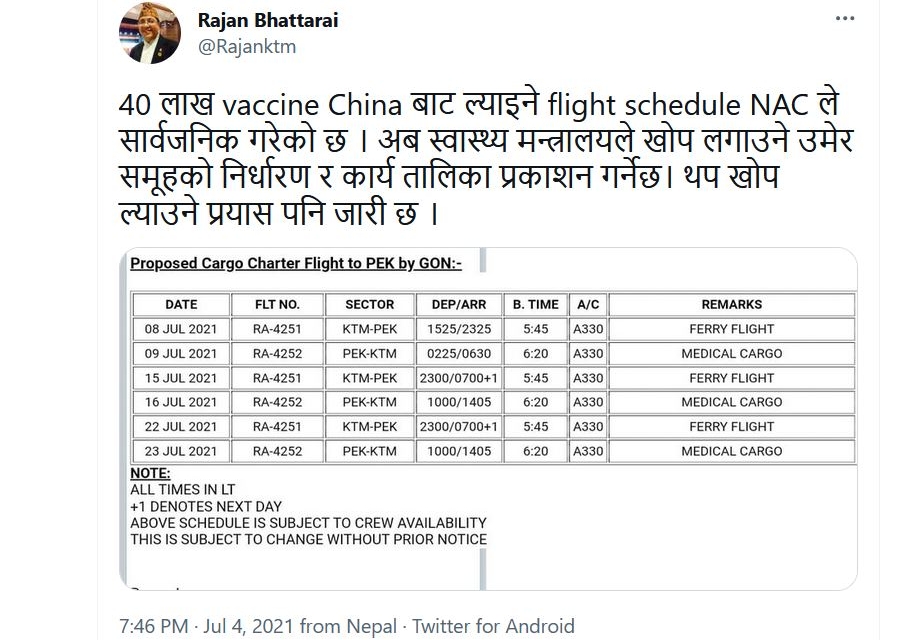 4 million of anti-COVID vaccines to arrive from China by July 23
Read Time: 2 minutes

As many as 4 million Vero Cell vaccines purchased by Nepal Government from the Chinese company Sinopharm will be delivered within the next three weeks.

The Foreign Affairs Advisor to the Prime Minister, Rajan Bhattarai, unveiled the schedule of three flights for vaccine supply on Sunday.

The first batch of vaccines is set to arrive in Kathmandu on July 9, Friday.

The Ministry of Health and Population (MoHP) had informed on July 2 that an agreement had been reached with Sinopharm to purchase anti-COVID vaccines.

However, the government has not divulged any further details regarding the purchase citing ‘non-disclosure agreement’ signed with the Chinese company.

As per the publicized schedule, the first flight carrying vaccines will leave for China on July 8 and return on July 9.

Spokesperson for MoHP Dr Krishna Poudel said the Ministry was unaware of how many vaccines would arrive in each batch.

According to Dr Taranath Pokhrel, chief of the family welfare division under MoHP, Nepal will soon receive around 1.5 million doses of vaccines through COVAX program.

Nepal is supposed to receive 2,256,000 doses of AstraZeneca/Oxford and Serum Institute of India’s vaccines under the Coalition for Epidemic Preparedness Innovations (CEPI), Gavi, the Vaccine Alliance and the World Health Organisation, as co-leads of the COVAX initiative for equitable global access to COVID-19 vaccines.

Of this, Nepal has so far received 348,000 doses of Covishield vaccines through COVAX on March 7.

However, representatives of the vaccine companies during a virtual meeting held with MoHP in coordination with the Nepali Embassy in US said that Nepal will not be able to obtain the from US companies before 2022.

So far, Nepal has received a total of 4.2 million doses of Covishield as well as Vero Cell vaccines under grants and purchase agreement. 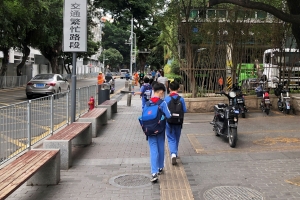