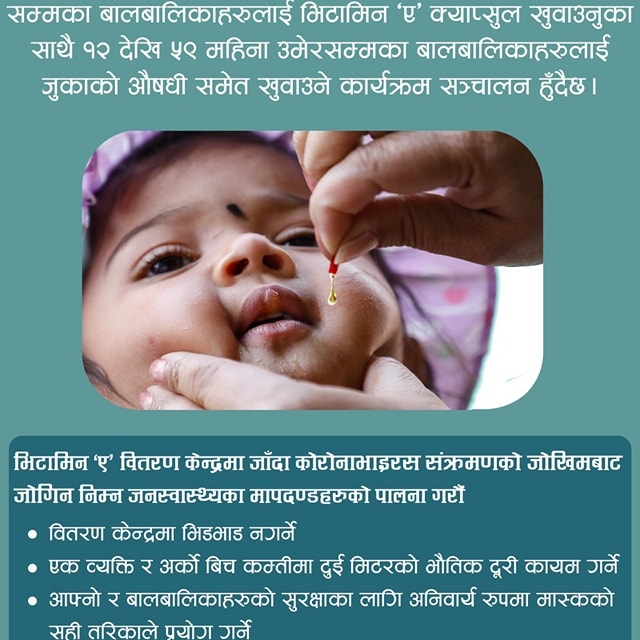 The Ministry of Health and Population (MoHP) is all set to conduct a two-day nationwide campaign to administer Vitamin-A supplement and deworming tablets for children under five years of age on October 24 and 25.

No children should be deprived of the vitamin supplement and deworming tablets as it helps in reducing child mortality, said Dr Sameer Adhikari, deputy spokesperson for MoHP. The Ministry aims to administer Vitamin-A supplements to over 2.75 million children aged between six months and five years.

Over 2.4 million children above 12 months will be given the deworming tablets, while female community health volunteers and other health workers have already been trained for the same. The Vitamin-A and deworming tablets have been dispatched to all local units, said Dr Adhikari.

All 51,000 female community health volunteers serving throughout the country will be deployed for the campaign. The Vitamin-A campaign administration has helped tackle Vitamin-A deficiency among children, which used to be a major public health problem in the country.

It is estimated that regular supplementation campaigns have reduced deaths among children under five by 23 per cent. The United Nations Children’s Fund in its report said that worldwide only two out of five children received the life-saving benefit of Vitamin-A supplementation in 2020 as the campaign was affected by the COVID-19 pandemic.

According to the World Health Organization, Vitamin-A deficiency causes visual impairment (night blindness) and vulnerability to illnesses like measles and diarrhea among children.