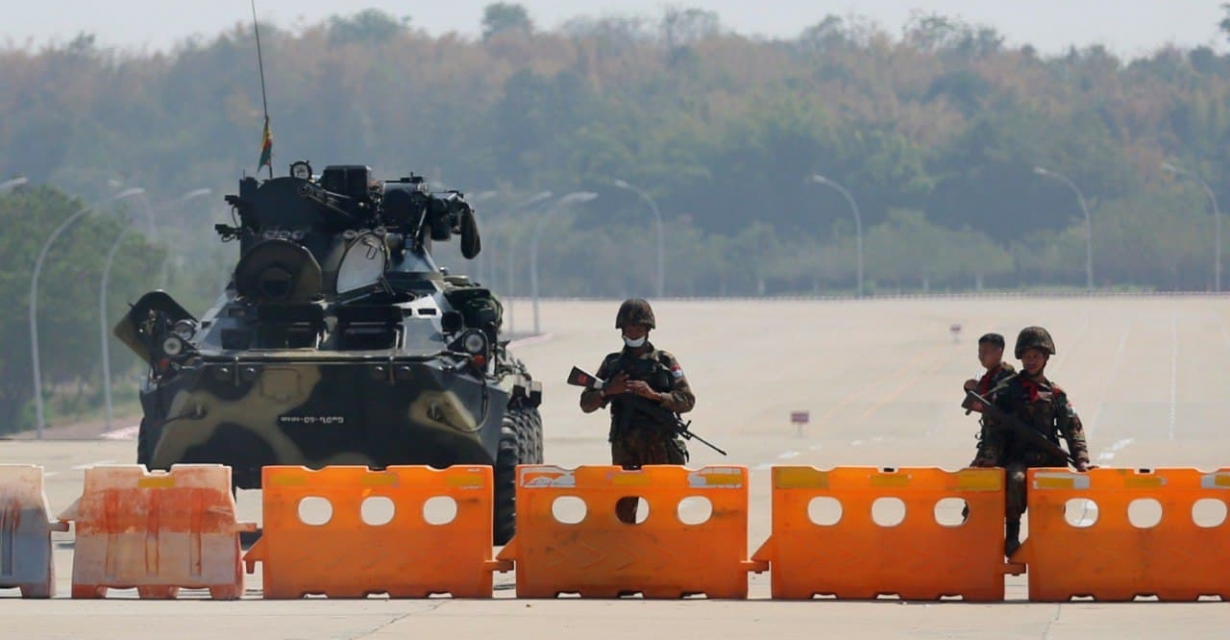 Myanmar's military checkpoint is seen on the way to the congress compound in Naypyitaw, Myanmar, February 1, 2021. REUTERS/Stringer
U.N. fears for Myanmar Rohingya after coup, Security Council due to meet Tuesday
Read Time: 2 minutes

The United Nations fears the coup in Myanmar will worsen the plight of some 600,000 Rohingya Muslims still in the country, a U.N. spokesman said on Monday as the Security Council planned to meet on the latest developments on Tuesday.

Myanmar’s military seized power on Monday in a coup against the democratically elected government of Aung San Suu Kyi, who was detained along with other political leaders of in early morning raids.

A 2017 military crackdown in Myanmar’s Rakhine state sent more than 700,000 Rohingya Muslims fleeing into Bangladesh, where they are still stranded in refugee camps. U.N. Secretary-General Antonio Guterres and Western states accused the Myanmar military of ethnic cleansing, which it denied.

“There are about 600,000 Rohingya those that remain in Rakhine State, including 120,000 people who are effectively confined to camps, they cannot move freely and have extremely limited access to basic health and education services,” U.N. spokesman Stephane Dujarric told reporters.

“So our fear is that the events may make the situation worse for them,” he said.

“We want to address the long-term threats to peace and security, of course working closely with Myanmar’s Asia and ASEAN neighbors,” Britain’s U.N. Ambassador Barbara Woodward, president of the council for February, told reporters.

China, backed by Russia, shielded Myanmar from any significant council action after the 2017 military crackdown. Beijing and Moscow are council veto powers along with France, Britain and the United States.

China’s U.N. mission told Reuters on Monday it hoped to find out more about the latest developments in Myanmar from the Security Council briefing on Tuesday.

“It’s also our hope that any move of the Council would be conducive to the stability of Myanmar rather than making the situation more complicated,” a spokesperson for the Chinese U.N. mission said.

The Myanmar army said it had detained Suu Kyi and others in response to “election fraud”, handing power to military chief Min Aung Hlaing and imposing a state of emergency for one year.

The United Nations called for the release of all those detained, Dujarric said. He said Guterre’s special envoy on Myanmar, Christine Schraner Burgener, “remains actively engaged” and is likely to brief the Security Council.

The United Nations has long had a presence in Myanmar. Security Council envoys travelled to Myanmar in April 2018 and met separately with Suu Kyi and Min Aung Hlaing following the crackdown on the Rohingya.