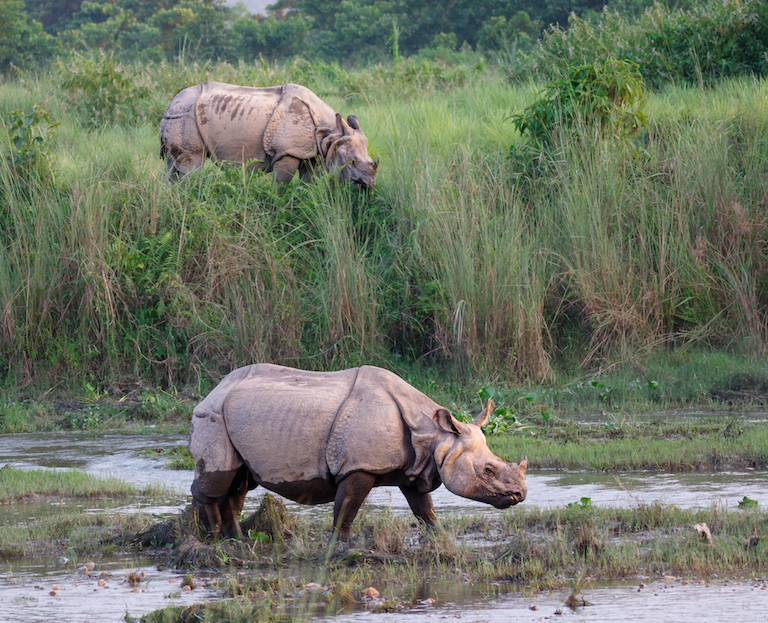 Two rhinos of the Chitwan National Park (CNP) were found dead in Chitwan on Monday.

According to CNP Information Officer Ashok Ram, one rhino was found dead near the Gandak Barrage on Monday morning and another in Sauraha in the afternoon.

Including these two, as many as seven rhinos have died in Chitwan National Park so far in the current fiscal year.

Ram said that District Forest Officer Gaurav Ojhal, of India-based Valmiki Tiger Reserve, had informed them that one rhino was found dead near the Gandak Barrage after being swept away by the Narayani River.

The postmortem of the dead rhino was carried out by the Indian forest officials, as it was found in the Indian Territory.

According to Ram, CNP was informed that body parts of the rhinoceros, like its limbs, horns and hooves, were burnt and destroyed as per the Indian policy.

Similarly, a 10-12 year old male rhino was found dead at Bankatta Bangachiya of Sauraha at around 3:00 pm on Monday.

According to Ram, the rhino might have succumbed to its injuries sustained in a fight with another rhino as another dead rhinoceros was found floating in the Narayani River, Triveni on Saturday.

On Friday also, a rhino of CNP was found dead some three kilometers south of CNP’s post at Lamichaur in Nawalpur.

Similarly, a rhino was found dead inside the National Park on September 6.

A team comprising CNP administration officials and Nepal Army personnel had found a dead rhino in Ghola of Bandar Jhula five days after they heard a gunshot on September 1. The rhino’s horn, however, was intact and despite an injury from the gunshot on its head, no bullet was found.

Park officials concluded that the rhino found dead on September 6 was killed by poachers while the others suffered either natural or accidental deaths.

Chitwan National Park is the main habitat of one-horned rhinoceros in Nepal.

According to the rhino census made public in April/May 2015, there were 645 rhinos in the country. Of them, 605 rhinos were found in Chitwan National Park and surrounding forests.

Scores of rhinos have died since the census. Though rhino poaching has significantly declined and zero rhinos have died in some years, the number of natural and accidental deaths is rising.