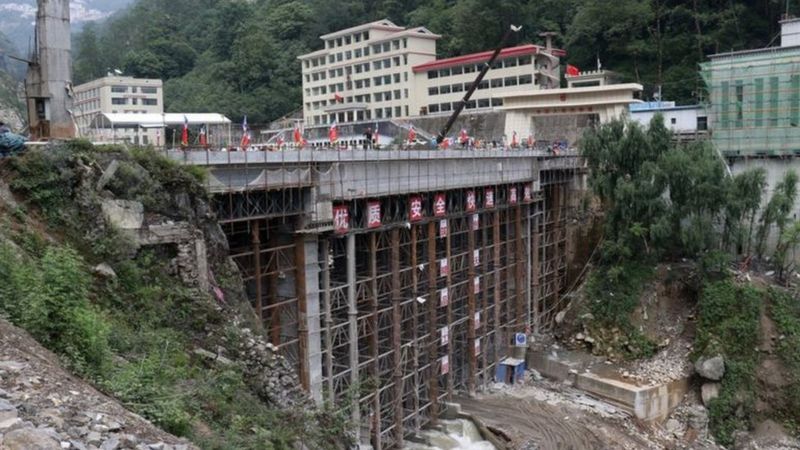 Entrepreneurs say that they have lost hope from the northern border as goods bought from China could not be brought into the Nepali market in time for festive season.

BBC Nepali quoted the Consulate General in Lhasa as saying that about 200 Nepali cargo containers are awaiting their turn to enter into Nepal through Khasa and Kerung border points.

Nepali traders, meanwhile, say that dozens more cargo containers are stuck in the warehouses in China.

WHAT ENTERS NEPAL THROUGH THE CHINESE PORT?

Fruits, clothes, raw materials of medicines and electronics goods are imported into Nepal through the Tatopani and Rasuwagadhi points.

“Apples and pears, which are grown in Tibet, comprise most of the fruits imported into the country,” said Ashok Kumar Shrestha, president of the Himalayan Cross-Border Chamber of Commerce.

“Even though there were talks to let in cargos containing fruits as they rot comparatively quickly, only a limited quota of containers are allowed to cross the border points daily.”

Apart from fruits, clothes, readymade garments and electrical goods are imported to Nepal from Tibetan cities and Guangzhou through Chinese ports.

Similarly, thousands of metric tonnes of chemical fertilizers purchased by Nepal government through open bidding have been coming into the country through these checkpoints.

Since the beginning of the COVID-19 pandemic, Nepali trucks and traders have not been able to travel to China, forcing them to rely entirely on the Chinese way of working.

Narad Gautam, head of the Tatopani customs office, said, “We get to know that the goods have been stuck only after the traders tell us. We are not allowed to go to the Chinese side and see for ourselves, and we do not have any communication mechanism with the Chinese side.”

According to Nepal’s Consul General in Lhasa, Nawaraj Dhakal, though Nepal government had purchased 10,000 metric tonnes of chemical fertilizers from China only 1,500 metric tonnes are being prepared to enter Nepal.

He says, “We have requested to urgently allow the much-needed 30-35 truckloads to enter Nepal Monday onwards. The Chinese side has responded positively to our request.”

Despite the Nepali side’s capacity to release up to 100 containers daily from Tatopani, China has been releasing an average of only a dozen containers a day, citing COVID.

It is said that only 10 trucks are entering Nepal daily from Rasuwagadhi.

After the 2015 earthquake that rattled Nepal, the northern ports have not been able to function smoothly whereas the COVID-19 pandemic has only added to the woes.

Ashok Kumar Shrestha, president of the Himalayan Cross-Border Chamber of Commerce and Industry, says that there is no point in continuing to import goods from these checkpoints if the situation cannot be reverted to that before the earthquake.

He wondered, “Why do traders import goods from those checkpoints when the products do not arrive on time? The continued hassle has shattered our faith in trade with China.”

Similarly, exports from Nepal across the northern border has come to a complete standstill. Though Chinese goods were also imported to Nepal through the Indian seaways, even that process has been slowed down and containers are awaiting their turn for clearance.