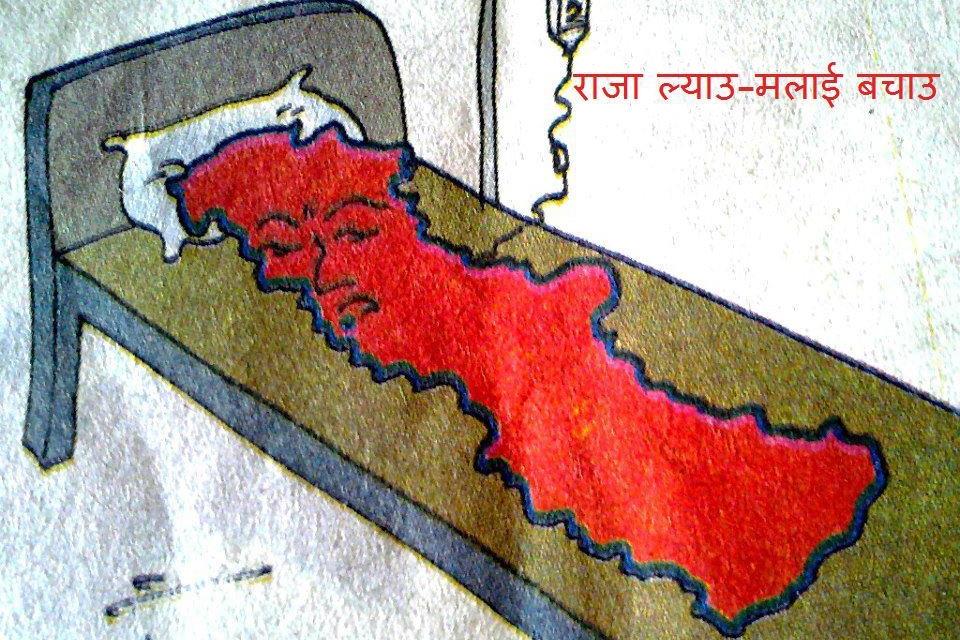 Nepal has gone through radical political transitions in the last twenty years. The royal massacre that rocked the nation transpired in 2001 resulting in the then King Birendra’s entire lineage being wiped out and the mantle going to his younger brother Gyanendra. King Gyanendra held power for only seven years before he was thwarted for the country’s transition to a federal republic.

King Gyanendra was an unpopular king, whose reign was haunted by his brother’s unfortunate and tragic passing and whose legitimacy to rule was perpetually questioned by the public. The King’s prerogative to rule was by divine right obtained during birth and Gyanendra struggled to showcase his divinity because he was never supposed to be king. Also, he had difficulties overcoming his businessman image that he had engendered during his predecessor’s reign. Besides this, his many political mistakes saw him face a ‘People’s Movement’ that resulted in him getting usurped by the parliament that he had dissolved in 2002. The Shah rule was over and a true democracy had begun in Nepal.

Fast forward to 2022, fourteen years after the establishment of a Federal Republic in Nepal, the ghost of the former unpopular king still remains. The rumbling of ‘Raja AauDeshBachau’ which translates to ‘Come and save the country my King’ is growing stronger and there have even been rallies advocating for the restoration of the monarchy.

The King whose right to rule wasn’t fully accepted by the public seems to have benefitted from his absence and there definitely seems to be the case of the absence making the heart grow fonder in the Nepalese populace. However, despite the abrogation of the monarchy from the political mechanism of the country, the remnants of the old order were allowed to remain in Nepalese cultural, social and political landscapes and thus started echoing pro-monarchist demands louder and louder for the restoration of the old status quo. The popularity of the monarchic order increasing is no surprise.

A Failure to Dichotomize:

Religion and monarchy are inherently intertwined. As mentioned above, the King obtains his prerogative to rule from divine rightand in Hinduism is considered to be an embodiment of Vishnu himself, one of the three major Hindu gods. The King is considered to be a demi-god and thus the monarch deserves the right to rule, the right to wield power and the right to stand above his subjects. The former Kings fulfilled their religious duties diligently because they understood the seed of their power lay with priests, temples and Hinduism. They could be seen in festivals and jatras initiating and overseeing the celebrations, displaying the grace and equanimity that characterizes a god himself. They could be seen putting tikas on their subjects in Dashain solidifying their status as fathers to all their subjects regardless of their age. This is the reason one of the first acts of a republic government in Nepal was abolishing the status of Nepal as a Hindu Kingdom. But, the politicians later failed to maintain the dichotomy between religion and state and regularly transgressed the boundaries reiterating the significance of a monarch for Nepal.

The separation of religion and state is considered to be one of the most important feats for democratic state building. Without this, the respective powers can get convoluted and the legitimacy of elections can get threatened. Democracy entails a system where people’s choices supersede any ideological assertions and is predicated on the equality of each person’s right to stand for election and become the head of the nation if the people so desire. The divinity of the King and his right to rule as portrayed by religion also needed to be eradicated along with the symbolic abolishment of the Hindu state to reaffirm with people that a democratic state instills power on its people and not some arbitrary person chosen based on the numbering of his birth in the royal family. However, such an eschewment of religious events by politicians hasn’t transpired to signify the separation of religion and state. Instead, Presidents and Prime Ministers regularly initiate and oversee festivals and jatras continuing practices that were undertaken during the monarchy. This continuation pits the elected politicians directly in comparison with the King in a domain that the monarch gained power from and thus deems the politicians undeserving of such a position due to their lack of supposed divinity. When the elected politicians should be attempting to attenuate the importance of religion in the state, their participation in religious events is inadvertently reinforcing its importance. When the general populace see politicians chairing religious festivals, their nostalgia for the ‘rightful’ King intensifies. It is a strategic catastrophe for democratic state building and developing democratic values in the public.

Another facet of the country that has continued to preserve monarchic traditions is education. Nepal’s democracy has been a top-down phenomenon that has seen monumental changes at the state-level functioning of the nation but has lacked the bottom-up educating programs that spread democratic values in the general populace. Lawmakers haven’t developed pedagogy of democracy for Nepal and instead have complacently assumed such values will naturally develop in the public without awareness, education and practice. Past events have showcased that such a monumental change isn’t digested by people so easily and what is taken for granted in other countries can trigger an identity crisis in the importing nation. An example of this was seen in the former communist states when they attempted to employ capitalism for the first time after separating from the Soviet Union. The exchanges based on self-interest that citizens of old capitalist states had ingrained in their value-system were difficult to adjust for the newly adopting people from Eastern Europe.

For this, the formal educational channel can be utilized as the platform to spread democratic values. Nepal glorifies its past with the conquests by Prithvi Narayan Shah and the feats of the Gurkhas accentuating the achievements of the monarchs. Although our past should be preserved and celebrated, importance should also be provided to the advantages of democratic rule and focus should be placed on the individualisation of human and their fundamental rights to vote and get elected in the curriculum. Also, the arbitrariness of the monarchy system should be highlighted and history lessons of malevolent rulers like Nero, Caligula and Henry VI could elucidate the importance of people’s right to vote out leaders. If such a balanced education isn’t provided and pedagogy for democracy isn’t developed, the entire educational system will remain a remnant of the past that perpetuates nostalgia for the monarchy.

However, the most damaging anachronistic practice that has been continued in the republic is the transfer of power and position based on kinship and familial ties. Politicians have been willing to blatantly promote their close ones to power disregarding the questions on legitimacy that can emerge from such acts. A monarchy follows a hereditary transfer of authority and a single family has the prerogative to rule regardless of merit. As mentioned above their superiority is solidified through religion and the divinity it establishes for the family. However, in a democracy, a certain degree of meritocracy is assumed and candidates are supposed to be people that have the best possibility of governing well. They do not have to share kinship ties with those already in power. Despite these fetters of democratic values and principles which would have undergirded the nascent republic if followed, the tendency of attempting to keep it in the family has been frequent by Nepalese politicians. The ‘afnomanche’ culture that DorBahadurBista identified in Nepalese society still holds ground and continues to taint democratic practice crony.

The nostalgia for the past in Nepal has emerged due to the performance of the country and the politicians after the establishment of the federal republic. However, we must understand that it has only been a paltry fourteen years since the establishment and it takes a significant time for a system to work and might only work once the older batch of politicians have been phased out. We, as Nepalese, tend to compare our predicament with other nations of today not realizing their histories were replete with wars triggered by power struggles themselves. We have instead imported a democratic system from other nations without going through the painful hardships those nations had to go through to develop such a system of governance and accountability through internal deliberation. The expectation of the transition needing to be perfect was far-fetched and too ambitious. Regardless, it is necessary to ensure the democratic system is allowed the timeframe to establish its values in Nepal without conflict. This will require the eradication of the remnants of the past and a strategic building of democratic foundations for the future.

The author is a Research Associate at Social Science Baha.

The views and opinions expressed in this article are those of the author’s and do not necessarily reflect the editorial stance or views of Aawaaj News.