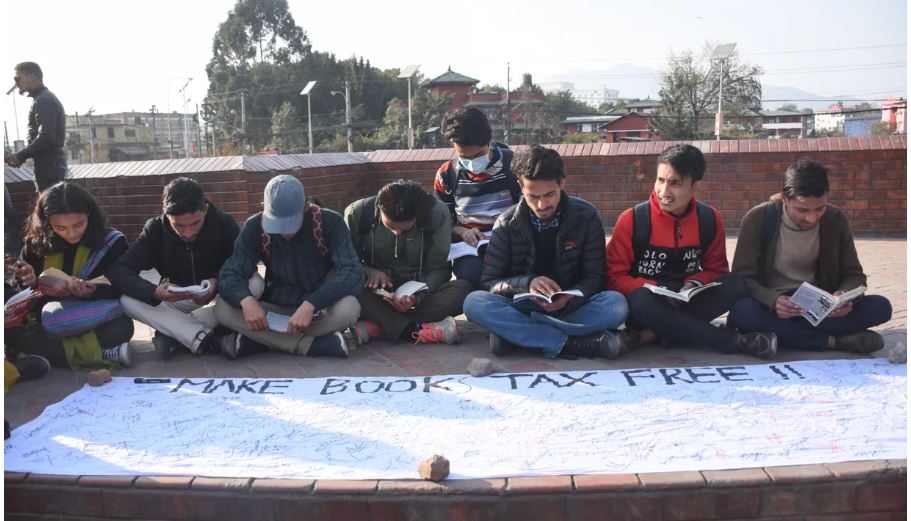 Reading enthusiasts and students are protesting against the government’s move to impose customs duty on imported books. The protests are being led by the students of Tri-Chandra Campus.

The budget announcement for fiscal year 2019-2020 mandated a 10 percent customs duty on all imported books. Before this, the government did not impose a tax on the import of books, especially schoolbooks, as mandated by UNESCO’s Florence agreement, which prohibits customs duties on the import of books and publications that can be classified as educational, scientific and cultural.

However, the new tax provision contradicts that agreement, affecting thousands of school and college going students.

Not only students but even book distributors have expressed their dissatisfaction over the government’s decision.

Book distributors and college students started the protest after the government, in its budget speech, announced the decision to impose 10 percent customs duty on all imported books.

The Nepal National Book Dealers and Publishers Association said that book enthusiast, students and businesses are greatly affected by the government’s move to impose tax on books.

According to activist Govinda Koirala, more than 400,000 undergraduate and postgraduate students are compelled to buy books at higher prices due to the government’s decision.

“Since 80 percent of the books recommended by Tribhuvan University are not available in Nepal and are imported, we have no option but to buy the books at an expensive rate,” added Koirala, demanding that the government roll back its decision.