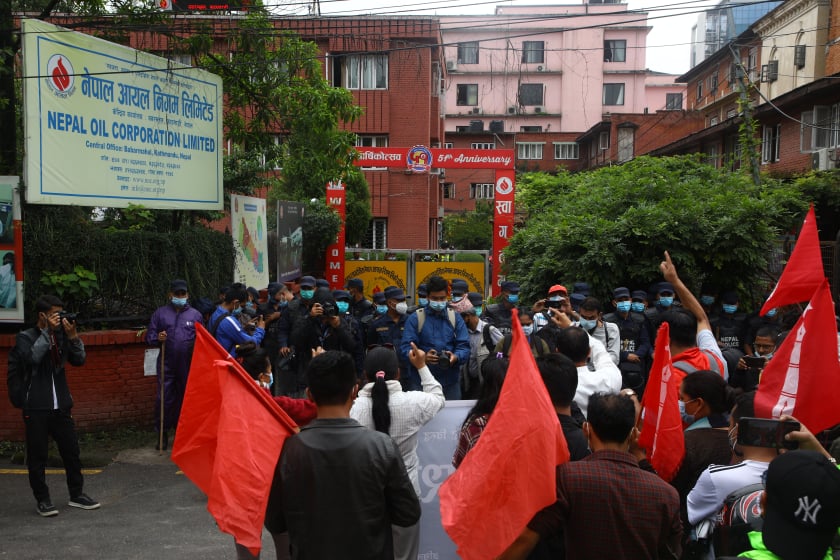 Five student unions staged a six-hour sit-in at the Depot of Nepal Oil Corporation in Thankot of Kathmandu on Wednesday against the recent hike in price of petroleum products.

Along with the Thankot depot, they had also reached depots in Dang, Charali and Bhairahawa.

The agitating students announced closure of petrol pumps across the country and obstructed the fuel supply from Thankot Depot.

Depot Chief Abhishek Thakur said that supply had been obstructed for the entire day due to the protest.

According to Nepal Petroleum Dealers’ National Association, some petrol pumps in Kathmandu valley remained shut on Wednesday due to the students’ protest, while most of the dealers remained open.

In a joint press release, the presidents of the student unions said that they will agitate until the fuel price hike is reversed.

According to the Emergency Services Operation Act, 2014 and the Essential Substances Control (Rights) Act, 2017, obstructions or strikes in transportation sector are not allowed.

Similarly, the price of aviation fuel has been increased by Rs 2 per liter on domestic flights to Rs 84, and on international flights by USD 19 per kiloliter to Rs 754 per liter.

The Corporation claims that it will incur a loss of more than Rs 910 million even after the price adjustment. “Hence, the rise in prices,” said Surendra Kumar Poudel, executive director of Nepal Oil Corporation.

“Fuel prices are rising in the international market. The Corporation will collapses if it fails to adjust the prices accordingly,” said Lilendra Pradhan, president of the National Association of Petroleum Dealers.

Consumers in Nepal are burdened by rising fuel prices in the international market, a stronger dollar and the government’s tax policy.

As per the Corporation, its loss can be minimized and fuel can be cheaper if the tax imposed under various titles is reviewed.

Following the protest, Nepal Oil Corporation reduced prices of petrol, diesel and kerosene by Rs 1 per liter later in the day.

Meanwhile, the government has hiked public transport fares by 28 percent effective from Wednesday.

In the revised rate, the fares of cargo vehicles in hilly region and Tarai region have also been increased by 20 percent and 26 percent respectively.

Citing increased operating costs of public transport, the Department of Transport Management (DoTM) has revised the fares of the public carriers. According to the department, the fares were last revised on September 23, 2018.

“The fares have been revised based on the escalation in major related indicators including the workers’ pay, depreciation amount, operating profits and costs of petroleum products and spare parts over the period,” reads a press statement issued by the DoTM.

As per the existing “scientific” mechanism, the hike in transport fares is determined based on 35 percent increase in fuel and 65 percent rise in non-fuel factors. Non-fuel components include bank interest rates, cost of spare parts, staff salary and administrative and maintenance costs.

According to an agreement between the government and transporters, the fares would be revised if fuel prices increase by more than Rs 5 per liter.

On the pretext of the increasing prices of logistics and petroleum products, transport entrepreneurs for the past few weeks had been demanding the government revise the transport fares. Forwarding a seven-point demand, they even staged a sit-in protest at the DoTM on Tuesday.

According to DoTM, the agreement to hike transportation fare was reached on July 11 as per a ministerial decision. The then Minister for Physical Resources Basant Kumar Nemwang, under the leadership of former Prime Minister KP Sharma Oli, had made the last minute decision.