Out of the 59 COVID patients admitted at the COVID Special Hospital in Beljhundi of Dang, 40 were gasping for air due to lack of oxygen cylinder at the start of the week.

The COVID Special Hospital falls under the constituency of Lumbini Chief Minister Shankar Pokhrel. As the hospital was struggling to save its patients’ lives on Sunday, CM Pokhrel, who had resigned the same day, was busy convincing his lawmakers to re-appoint him.

Pokhrel, a close confidante of CPN-UML chair and Prime Minister KP Sharma Oli, Lumbini lawmakers, and ministers were engaged in the game of saving face and overthrowing their contemporaries all day on Sunday while COVID patients throughout the Province were having hard time getting hospital beds and oxygen cylinders.

In his televised address to the nation the next day, as Prime Minister Oli was assuring the public that no Nepali will lose their lives for want of oxygen and hospital beds, a resident of Devchuli-13, Nawalparasi, Thin Prasad Kafle lost his life on the way to hospital as he was being taken to hospital in a tractor because his family couldn’t get hold of an ambulance.

While thousands of COVID-infected patients are being hospitalized daily, people’s representatives are busy playing power games to suit their interest.

As the priorities of citizens and political leaders differ, general public have been at the receiving end of the raging pandemic.

Minister of Foreign Affairs and spokesperson of ruling party Pradip Gyawali admits that the gap between citizens’ and political leaders’ priorities is widening.

He, however, claimed that only provincial governments were involved in the politics of power-play not the central government.

The central government led by PM Oli, meanwhile, has been clearly indulged in power-play to protect its position instead of taking measures to fight the pandemic.

As the second wave of the pandemic hit the country, the government ignored early warning by experts that said children and young adults were more vulnerable to the new variant of the virus.

The Ministry of Education initially was against shutting down physical classes at schools and colleges.

While stakeholders, health workers and the Health Minister himself told PM Oli that the new variant of COVID-19 was spreading in the country at an alarming rate, Oli’s focus was on unveiling statues of Ram and Sita at Madi, Chitwan, an event which helped spread of coronavirus at community-level.

Contrary to the government’s decision to not host crowded gatherings, several politicians gathered in Baluwatar, Devghat and Madi the same day in a mass of thousands during the unveiling, transporting and establishing Ram-Sita statues.

Instead of condemning such gatherings, CPN-UML deputy leader Subash Nemwang and Tourism Minister Bhanubhakta Dhakal had said, “It’s ok to gather in crowds because health safety protocols have not been implemented yet as they have not been announced officially.”

Now when the country is facing a serious health crisis and the people are in desperate need of hospital beds, oxygen and ventilators, the people’s representatives, instead of taking any concrete action, are busy issuing statements urging people to stay safe and indoors.

PM Oli in his address to the nation on Monday said that saving people’s lives was his government’s first responsibility, while he seemed oblivious to the citizens’ sufferings.

While a provincial chief minister can be removed and reappointed within a day, it is difficult for the general public to get admitted in a hospital and for the family of COVID-infected people to receive dead bodies of their loved ones after they perish.

Likewise, leaders of the opposition parties have done nothing but indulge in blame-game, pushing the responsibility of saving people’s lives to the central government.

Pampha Bhusal, a member of the Standing Committee of the CPN-Maoist Center said, “The government should at least convene regular parliamentary sessions and formulate a common policy for better handling of the second wave of COVID-19 infection. But the government has not shown any interest in doing so. It is rather functioning in violation of the constitution and laws,” she said.

Meanwhile, the country recorded a record 8,970 new COVID cases, including 3,972 in Kathmandu valley. As many as 54 COVID patients died in the past 24 hours.

Nepal is now recording 57 times as many cases as a month ago, with 44 per cent of tests now coming back positive, according to the International Federation of Red Cross and Red Crescent Societies.

With only one per cent of the country’s population being fully vaccinated and the inoculation drive disrupted, “What is happening in India right now is a horrifying preview of Nepal’s future if we cannot contain this latest COVID surge that is claiming more lives by the minute,” said Netra Prasad Timsina, chair of the Nepal Red Cross.

“It is beyond distressing to see that people cannot say goodbye to their loved ones as cremations are taking place at record levels,” said Timsina. 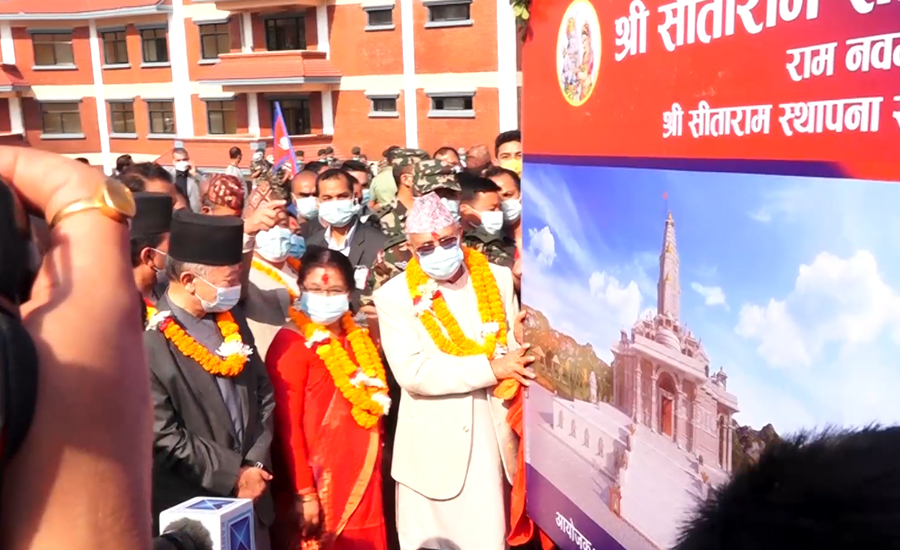 Prime Minister KP Sharma Oli sending off idols of Hindu gods Ram and Sita to Madi of Chitwan on April 20 in his bid to establish that Ram was born in Nepal. 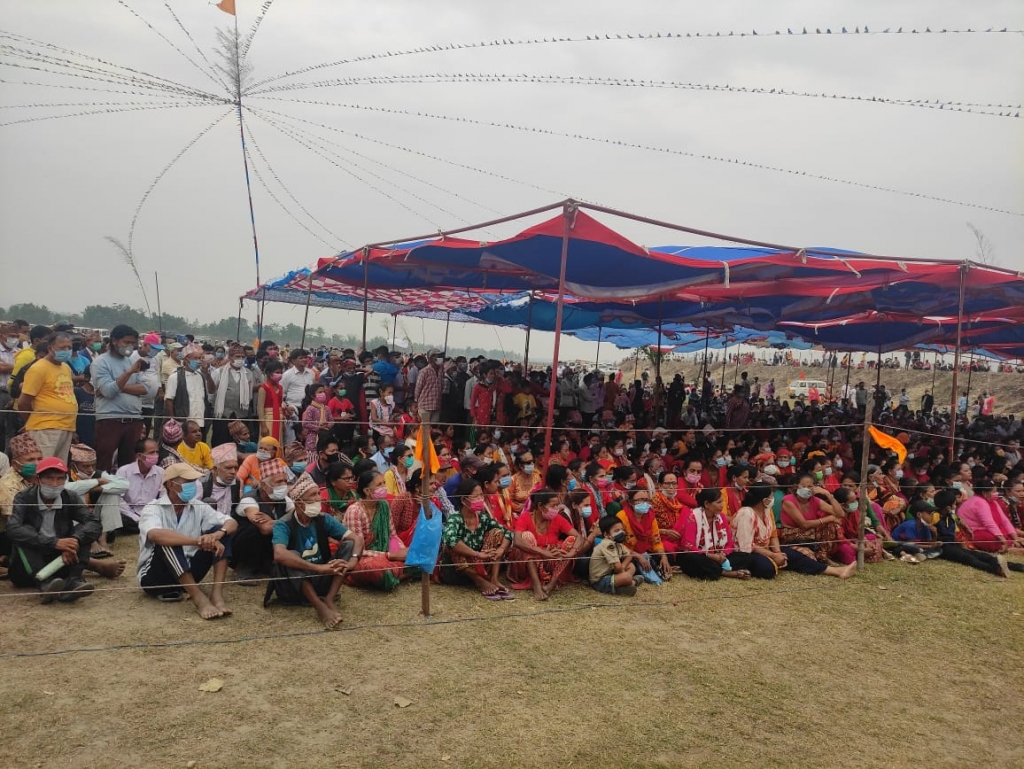 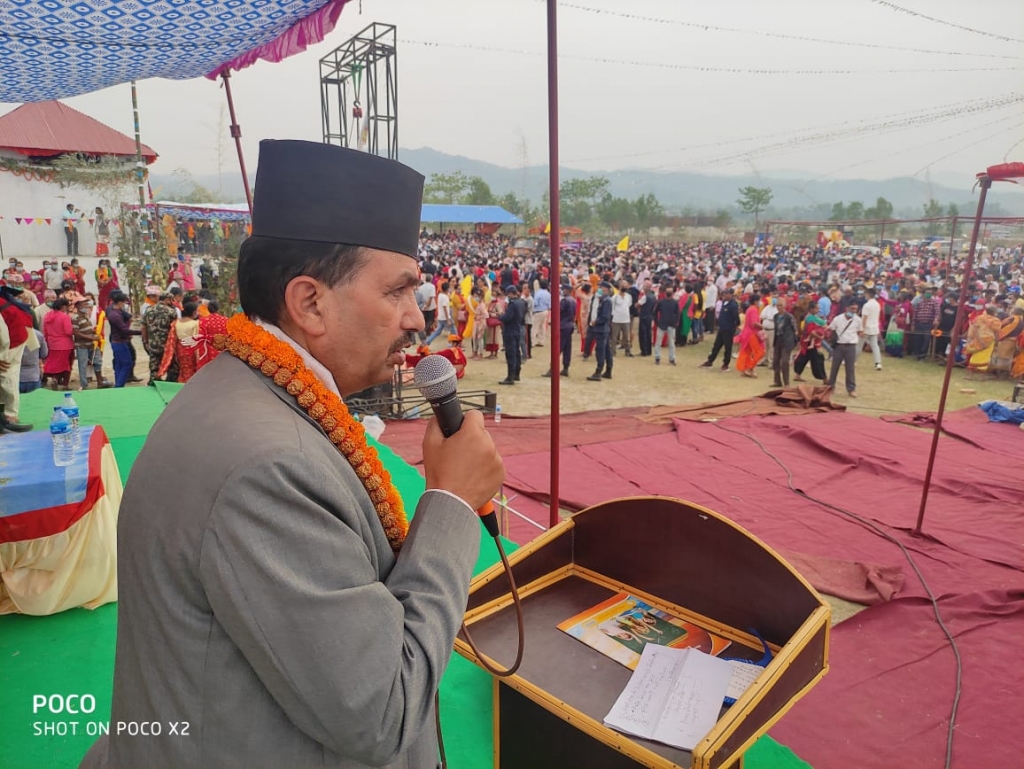 Tourism Minister Bhanu Bhakta Dhakal addressing the crowd gathered in Madi of Chitwan as idols of Hindu gods Ram and Sita, sent by Prime Minister KP Sharma Oli, was brought to the village from Kathmandu on April 21. 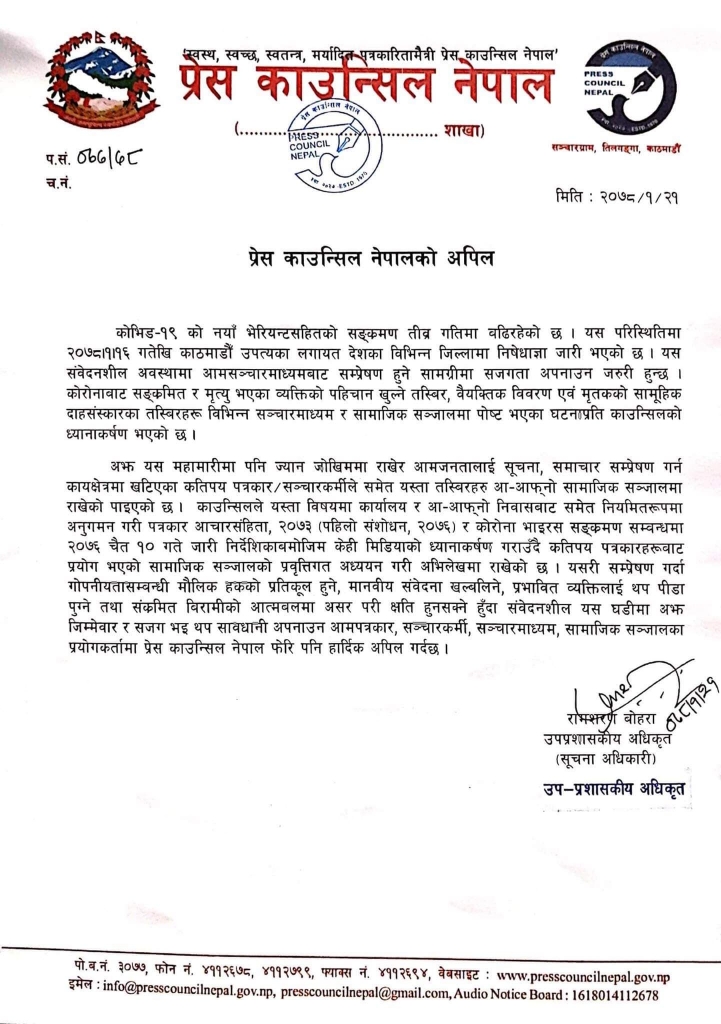