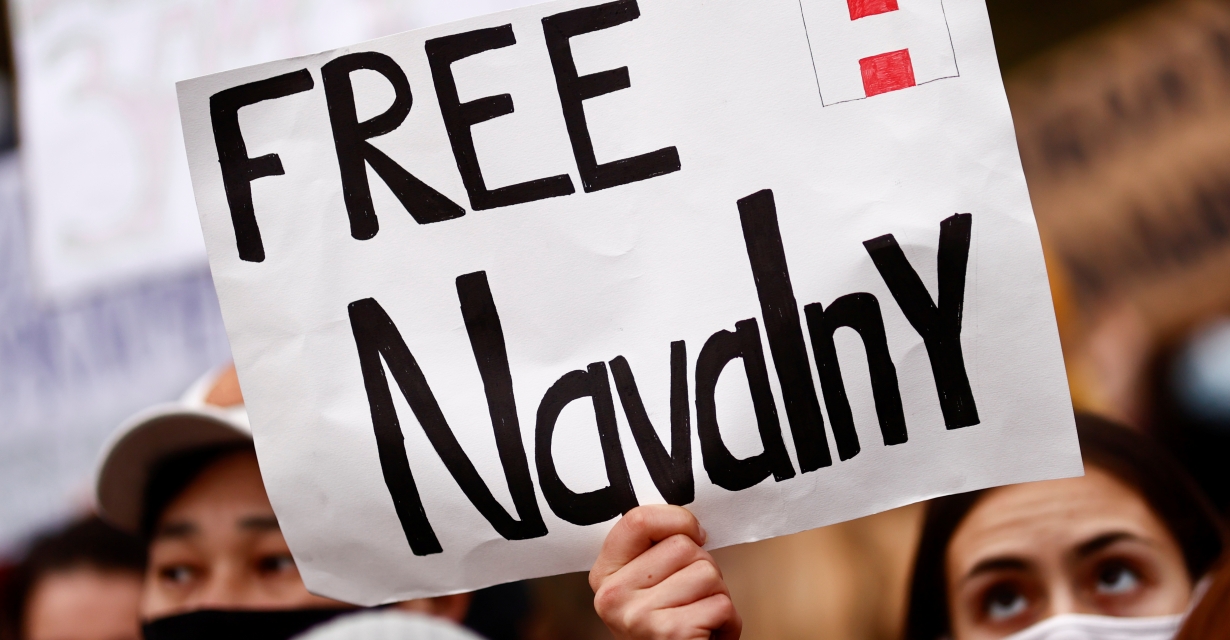 People participate in a rally to demand the release of Russian opposition leader Alexei Navalny at the Trocadero square in front of the Eiffel tower, in Paris, France January 23, 2021. REUTERS/Christian Hartmann
Police crack down on Russian protests against jailing of Kremlin foe Navalny
Read Time: 8 minutes

MOSCOW, Jan 23 (Reuters) – Police detained more than 3,000 people and used force to break up rallies across Russia on Saturday as tens of thousands of protesters ignored extreme cold and police warnings to demand the release of Kremlin critic Alexei Navalny.

Navalny had called on his supporters to protest after being arrested last weekend as he returned to Russia from Germany for the first time since being poisoned with a nerve agent he says was slipped to him by state security agents in August.

The authorities had warned people to stay away from Saturday’s demonstrations, saying they risked catching COVID-19 as well as prosecution and possible jail time for attending an unauthorised event.

But protesters defied the ban and, in at least one case in temperatures below -50 Celsius (-58 Fahrenheit), turned out in force. Leonid Volkov, a Navalny ally, called on them to do the same next weekend to try to free Navalny from what he called “the clutches of his killers”.

In central Moscow, where Reuters reporters estimated up to 40,000 people had gathered in one of the biggest unauthorised rallies for years, police were seen roughly detaining people, bundling them into nearby vans. 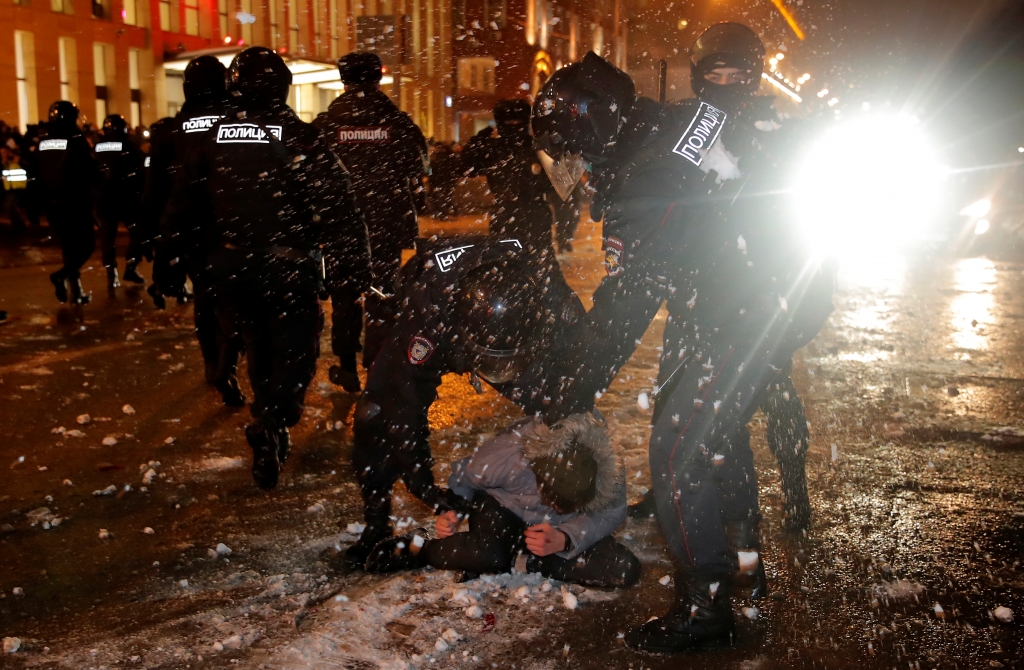 The authorities said just some 4,000 people had shown up, while the foreign ministry questioned Reuters crowd estimate.

“Why not just immediately say 4 million?” it suggested sarcastically on its official Telegram messenger channel.

Ivan Zhdanov, a Navalny ally, put turnout in the capital at 50,000, the Proekt media outlet reported.

Some protesters chanted “Putin is a thief”, and “Disgrace” and “Freedom to Navalny!”

Navalny’s wife Yulia was briefly detained at the rally before being released. Some of Navalny’s political allies were detained in the days before the protest, others on the day itself.

At one point, protesters surrounded a sleek black car with a flashing light used by senior officials, throwing snowballs at it and kicking it. A group of policemen were also pelted with snowballs by a much bigger crowd.

The OVD-Info protest monitor group said that 3,296 people, including 1,294 in Moscow and 489 in St. Petersburg, had been detained at rallies in around 100 towns and cities.

The United States condemned what it described as “harsh tactics” used against protesters and journalists and called for Navalny’s “immediate and unconditional” release.

“We call on Russian authorities to release all those detained for exercising their universal rights,” U.S. State Department spokesman Ned Price said in a statement. 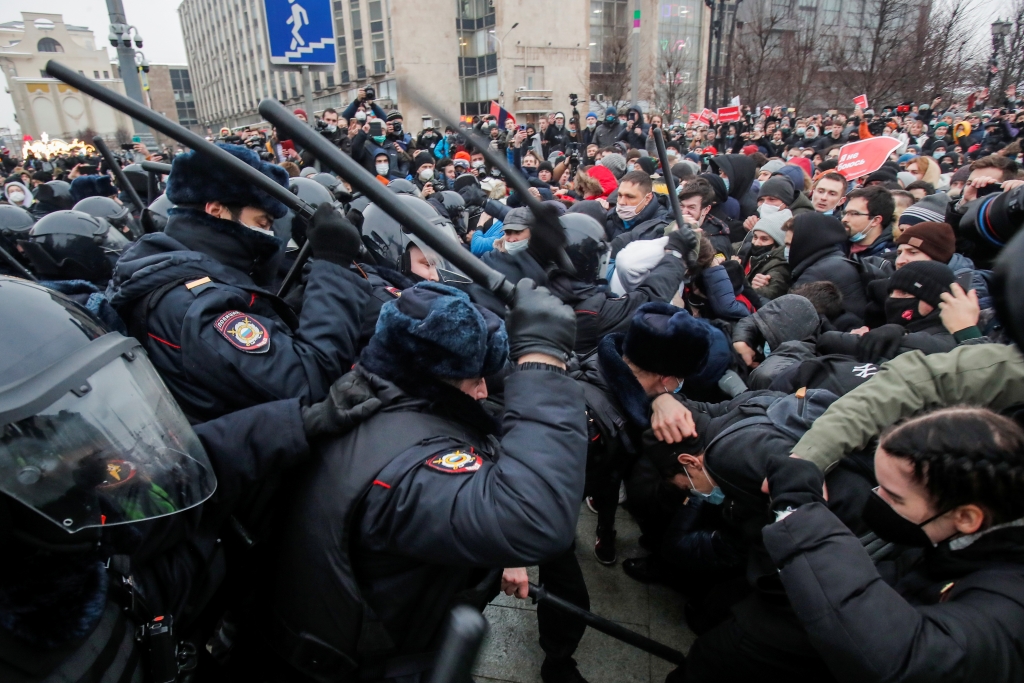 The European Union’s foreign policy chief, Josep Borrell, said in a post on Twitter that he deplored the authorities “disproportionate use of force”, while Britain’s foreign minister, Dominic Raab, condemned the “use of violence against peaceful protesters and journalists”.

Navalny, a 44-year-old lawyer, is in a Moscow prison pending the outcome of four legal matters he describes as trumped up. He accuses President Vladimir Putin of ordering his attempted murder. Putin has dismissed that, alleging Navalny is part of a U.S.-backed dirty tricks campaign to discredit him.

Some protesters marched on the prison, where police were waiting to arrest them.

Images of protesters with injuries such as bloodied heads circulated on social media.

The scenes were reminiscent of the months-long unrest in Russia’s neighbouring ally Belarus where anti-government protests flared last August over allegations of voter fraud.

One Moscow protester, Sergei Radchenko, 53, said: “I’m tired of being afraid. I haven’t just turned up for myself and Navalny, but for my son because there is no future in this country.”

There was no immediate comment from the Kremlin, which had previously called the protests illegal and the work of “provocateurs”.

In Berlin, Hamburg and Munich, nearly 1,000 people demonstrated against Navalny’s arrest. Small demonstrations were also held in Bulgaria and some 200-300 people protested in Paris.

Police in Siberia’s Yakutsk, one of the coldest cities in the world, where the temperature was -52 Celsius (-62 F) on Saturday, grabbed a protester by his arms and legs and dragged him into a van, video footage showed.

In Moscow, some journalists covering the protests were detained, drawing a rebuke from the U.S. Embassy. 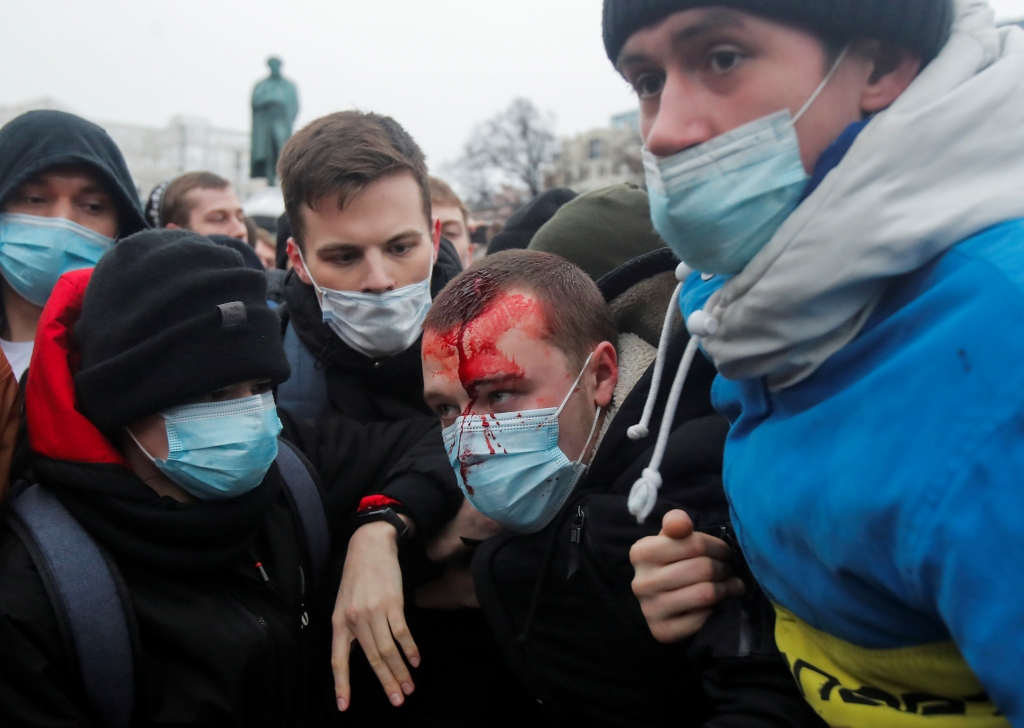 SENSITIVE MATERIAL. THIS IMAGE MAY OFFEND OR DISTURB An injured man is assisted during a rally in support of jailed Russian opposition leader Alexei Navalny in Moscow, Russia January 23, 2021. REUTERS/Maxim Shemetov

There were outages on mobile phone and internet services, the monitoring site downdetector.ru showed, a tactic sometimes used by authorities to make it harder for protesters to communicate among themselves.

In a push to galvanise support ahead of the protests, Navalny’s team released a video this week about an opulent palace on the Black Sea they alleged belonged to Putin, something the Kremlin denied. As of Saturday the video had been viewed more than 70 million times.

Navalny’s allies hope to tap into what polls say are pent-up frustrations among the public over years of falling wages and economic fallout from the pandemic.

But Putin’s grip on power looks unassailable for now and the 68-year-old president regularly records an approval rating of over 60%, much higher than that of Navalny.