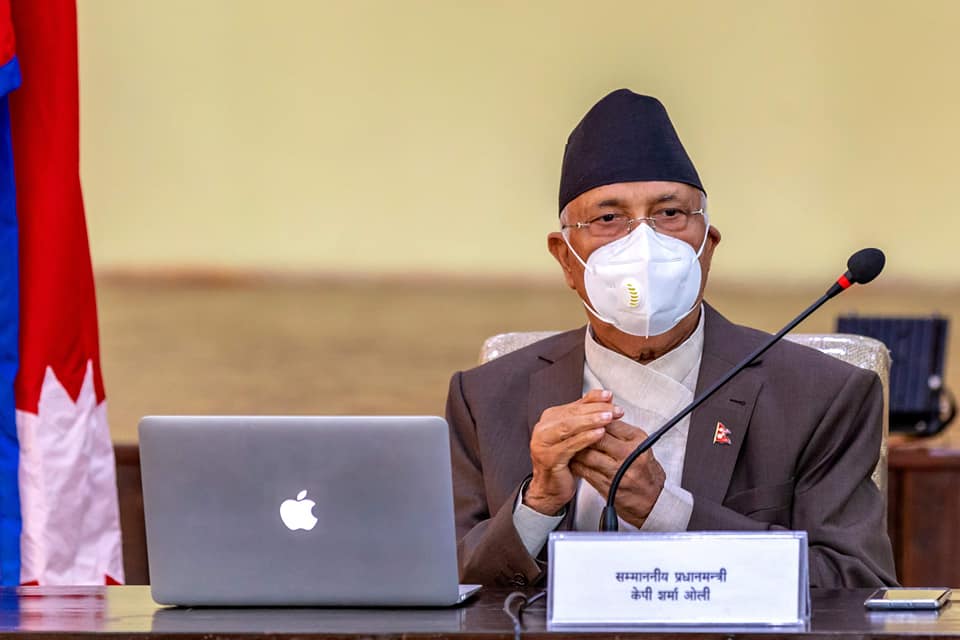 Addressing an event held to mark the 69th birth anniversary of late leader Madan Bhandari on Sunday, Prime Minister KP Sharma Oli said that India was conspiring to unseat him. Foreign policy experts are of the view that the prime minister’s statement at a time when Nepal-India relations is souring could further damage bilateral relationship between the two neighboring countries.

PM Oli has been facing calls for resignation of late from within his party for his unilateral manner of taking decisions. Leaders of Nepal Communist Party (NCP), of which Oli is the co-chairperson, have been demanding one person one post rule in the party.

Oli, in his Sunday’s speech, had said that India was conspiring to oust him for releasing the new political map that includes Lipulek, Limpiyadhura, and Kalapani within Nepali territory.

The prime minister’s statement at such a crucial time would further deter India from sitting diplomatic for talks, according to Nepal’s former ambassador to Denmark Vijay Kant Karna.

Karna said, “If we cannot hold dialogue with India to improve cooperation in areas such as trade, transit, security and river management, then that will be a disadvantage for both of us. But the Prime Minister’s recent statement undermined diplomatic decorum.”

He added that the PM wants to appease a section of society that equates India-bashing with nationalism.

“We have enough facts and evidence and we’ll sit (with India) to resolve the dispute through diplomatic negotiations,” law minister Shiva Maya Tumbahamphe had told Parliament after the new map was passed on June 18.

However, New Delhi has long been dodging Nepal’s calls for diplomatic talks over the border issues.

Political expert and professor, Krishna Pokhrel, said that Oli touting a conspiracy theory to save face was unbecoming for the head of the government.

“Oli has been facing criticism from within his own party for not following NCP’s code of conduct and taking unilateral decisions. Even when he was ousted during his earlier stint as the prime minister after a face-off with the then CPN-Maoist party, Oli had peddled the ‘conspiracy by foreign forces’ rhetoric,” said Pokhrel.

“The decision to release the new political map wasn’t Oli’s. It was NCP’s Secretariat Committee who convinced the PM to do so. The new map was not in Oli’s agenda at all. So, why would India try to unseat Oli when the new map was not even his agenda?”

“Moreover, if we are to go by Oli’s theory that India could unseat a prime minister in Nepal, it is also possible that he was made the Prime Minster at India’s behest in the first place. But that isn’t true,” said Pokhrel.

Pokhrel added that instead of making statements that could further damage bilateral relations, the PM should make efforts to initiate diplomatic dialogue.

Similarly, former foreign minister Prakash Chandra Lohani wrote a note to the Prime Minster on Facebook saying, “Nepali people and political parties all supported your efforts to release the new map. Such unity would not have been possible in Parliament if the political parties had turned to foreigners. Despite all this, to claim that all others are acting at the behest of foreigners means to assert that you are the only patriotic person in this country.”

The Nepal-India map row began last month after India inaugurated an 80 km road from the northern state of Uttarakhand to Lipulekh on the border with the Tibet region of China, about 19 km of which passes through the area Nepal says belongs to it.

Nepal says the land belongs to it as a river in the region formed its western border with India under an 1816 treaty with the British East India Company.

Nepal, which was never a part of British India, and New Delhi differ over where the river originates.

The disputed land, about 372 square km in area, is strategically located at the tri-junction between Nepal, India and the Tibet region of China.

India has kept a security presence in the area since a border war with China in 1962.