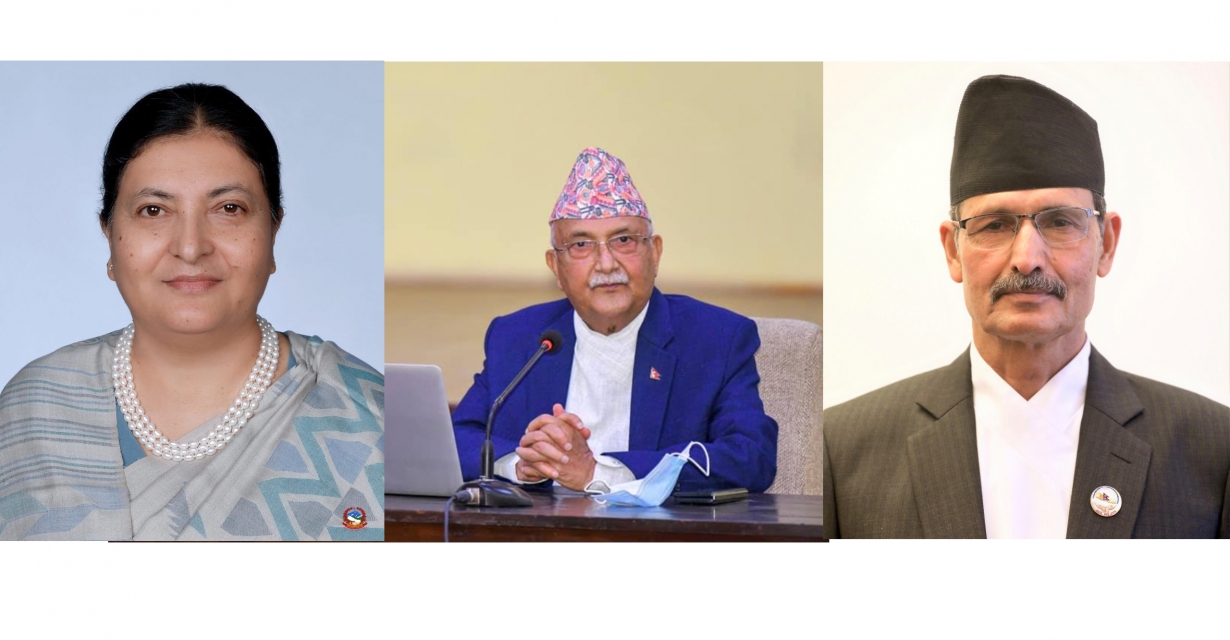 In response to the Supreme Court’s show cause notice on the government’s decision to dissolve the House of Representatives, Prime Minister KP Oli, President Bidya Devi Bhandari and House Speaker submitted their written calcification to the court on Thursday.

In a written reply to the Supreme Court on the issue of dissolution of the House of Representatives, the President’s Office claimed that the President has the right to ascertain whether the basis of the claim submitted by a Member of Parliament for the post of Prime Minister under Article 76 (5) of the Constitution is credible or not.

Similarly, PM Oli in his response said that it was not up to the Judiciary to appoint the country’s prime minister as it cannot undertake the legislative and the executive functions of the nation.

“The Court’s duty is to interpret the Constitution and the existing laws, it cannot play the role of the legislative or the executive bodies,” Oli said in his response, adding “Appointment of a Prime Minister is absolutely a political and an executive process.”

“As per Article 76 (5), there is no such provision of a person gaining or losing vote of confidence in House being examined by the legislative or the judiciary,” the response letter read.

The PM argued that the HoR was dissolved constitutionally and was in line with the Supreme Court’s previous order.

Oli also justified that the House was dissolved following the failure to form an alternative government, exhausting all options of Article 76 as mentioned in the Supreme Court order, and therefore the act was natural and constitutional.

Meanwhile, House Speaker Agni Sapkota, in his response to the apex court, has accused the President and the Prime Minister of taking unconstitutional steps to dissolve the Parliament.

Stating that the President did not appoint a new Prime Minister despite Sher Bahadur Deuba claiming support of the majority parliamentarians and instead dissolved the House of Representatives at midnight, Speaker Sapkota accused both Bhandari and Oli of indulging in unconstitutional activities.

He remarked that under Article 66 of the constitution, the President did not have the right to test the vote of confidence submitted by prime ministerial candidates.

Nepal plunged into fresh political turmoil on May 22 as President Bidya Devi Bhandari dissolved parliament at midnight and fixed general elections in November amid a worsening COVID-19 outbreak.

The surprise announcement came after a presidential statement said neither the caretaker Prime Minister KP Sharma Oli, nor opposition leader Sher Bahadur Deuba were able to demonstrate a majority to form a new government by the 24-hour deadline set by Bhandari.

It said the decision was made on the recommendation of the cabinet headed by caretaker Prime Minister Oli, whose December 2020 dissolution of parliament sparked weeks of protests and was reversed by the Supreme Court as unconstitutional in February.

Opposition alliance of five political parties have been claiming that Oli, who had lost a vote of confidence in May, has no legal authority to recommend the dissolution of the parliament.

They are of the view that the prime minister had pushed the country into a serious problem at a time when people were suffering and dying due to the coronavirus pandemic.

Meanwhile, Oli has been insistent that fresh elections could end the political confusion of recent months. “Elections can be held despite the pandemic,” he has told reporters.