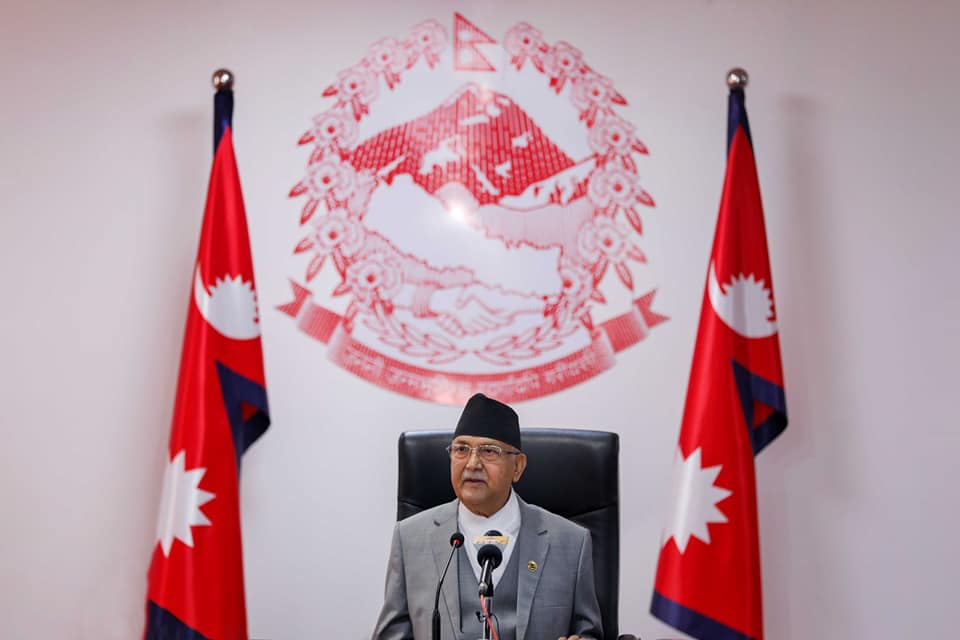 Prime Minister KP Sharma Oli, is his address to the nation on Monday, announced to build a 1,000-bed temporary hospital in the Kathmandu Valley with help of Nepal Army.

He said that Nepal Army has been ordered to build a 1,000-bed temporary hospital in the Valley as soon as possible.

Spokesperson of the Ministry of Health and Population (MoHP) Dr Jageshwor Gautam said that holding centers are being set up with capacity of 1000 beds in each province with a separate 1000-bed holding center in the Valley.

“People are being treated outside the hospital in Nepalgunj and Dang for want of beds. Similarly, as the COVID wards designated by the government in the Kathmandu Valley are filled with patients, general public is forced to pay expensive fees for treatment at private hospitals,” said Gautam.

Moreover, Prime Minister Oli has announced that the new buildings of Bir Hospital and Tri-Chandra Military Hospital, medical colleges, big government and private hospitals in the Kathmandu Valley will be operated as COVID-19 hospitals.

He also announced that oxygen plants would be set up in major hospitals and medical colleges.

“Oxygen plants that are not in operation will be repaired soon and brought into operation,” Oli said adding, “Strict action will be taken against those who illegally export liquid oxygen. Oxygen produced from oxygen plants across the country is currently banned from being supplied to sectors other than hospitals and treatment purposes.”

MoHP has received complaints of people being forced to pay up to one lakh rupees per day for the treatment of coronavirus infected patients at big private hospitals that have ventilators in the Kathmandu Valley.

According to MoHP, if a private hospital takes more than Rs 30,000 for treatment of COVID-19 patient on ventilator, it will be considered as black marketing.

All government and private hospitals will have to update the daily details of the beds available, the Ministry added.

Oli announced that every hospital must have stock of antiviral drugs and other drugs used to treat COVID-19 patients. “Strict action will be taken against those who create artificial shortage of such drugs to sell them at higher price,” he said.

He informed that a one-year contract will be made with retired doctors to prevent the shortage of manpower involved in the treatment of COVID patients.

Oli said that security personnel would be mobilized to strictly implement the prohibitory orders and to protect public health.

He added that it was not possible to break the chain of transmission only by arranging beds in hospital or isolation centers.

However, the Civil Aviation Authority of Nepal issued a statement late in the day regarding international flights to Kathmandu, which stated that two flights a week between Kathmandu and Delhi will be conducted under the Air Travel Bubble Arrangement.

Oli added that only 13 of the border checkpoints between Nepal and India will be in operation for the entry of Nepali citizens.

Meanwhile, PM Oli informed that initiatives were being taken to bring vaccines from China and Russia.

‘The government itself has started the process of procuring the required amount of vaccines. The government is making efforts to bring in enough vaccines as soon as possible through coordination with China, Russia and other vaccine producing countries under COVAX programme,” he said.