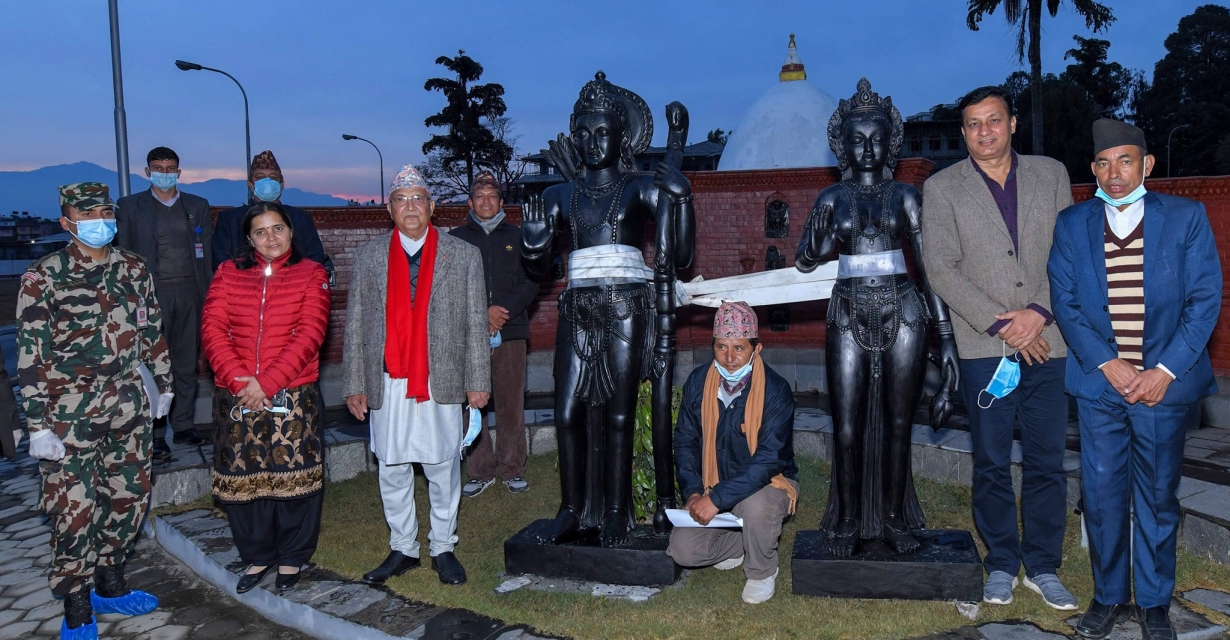 PM Oli all set to send off Ram-Janaki statues to Madi in his bid to claim Ram was born in Nepal
Read Time: 2 minutes

The Ayodhyapuri of Madi municipality, Chitwan, which Prime Minister KP Sharma Oli has claimed to be birth place of Lord Ram, is all set to install statues of Hindu deities — Ram, Sita, Laxman and Hanuman, on the day of Ram Navami, which falls on April 21 this year.

Prime Minister Oli will be bidding farewell to a team from Madi, who will take the statues to their hometown from the Pashupatinath temple premises in Kathmandu.

The four statues are currently housed at the Prime Minister’s official residence in Baluwatar.

On the occasion of Bhanu Jayanti last year, PM Oli had claimed that Hindu lord Ram’s birthplace was not India but somewhere in between Birgunj and West Thori.

Despite his statement being baseless and controversial, the plan to build a Ramdham in Ayodhyapuri, Madi was put forward. Preparations are now underway to install the statues for the time being as the project plan of Ramdham is being prepared.

“For now we will bring idols and put them in a temple temporarily. After the project plan of Ramdham is ready in around 20 months, a grand Ram temple will be constructed according to the same plan,” said Bijay Subedi, lawmaker of Bagmati Pradesh.

According to him, the idols will be brought to Bhadrakali on April 20 after the Prime Minister sends off the Madi team from Pashupatinath premises.

Speaking at a cultural programme at his residence to mark Bhanu Jayanti last year, Oli had accused India of cultural oppression and encroachment, and said that Nepal’s contribution to science had been undervalued.

“We still believe we gave Sita to Prince Ram but we gave the prince too, from Ayodhya, not India. Ayodhya is a village a little west of Birgunj,” Prime Minister Oli had said.

Ayodhya is a town in Uttar Pradesh, around 135 km from state capital Lucknow.

Prime Minister Oli’s contentious remarks had come amid a row between Nepal and India over a revised political map in which the southern neighbor put Lipulekh, Limpiyadhura and Kalapani areas in its territory.