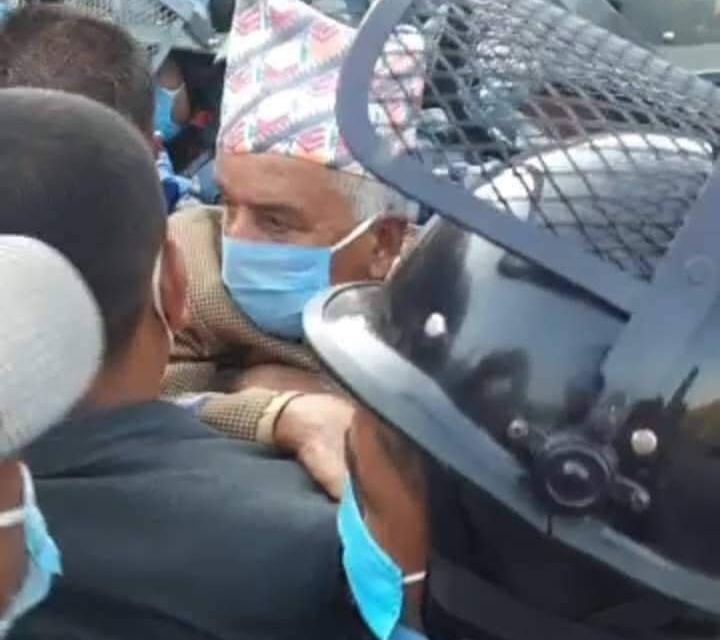 Paudel was scheduled to inaugurate the motorable bridge amid a special function organized by the party’s local level committee.

The ruling Nepal Communist Party (NCP), however, was allegedly against Paudel inaugurating the bridge and hence Tanahun Chief District Officer, Sagar Acharya, had issued a prohibitory order anticipating untoward incident during the inauguration.

According to Paudel’s aides, he was arrested at the CDO’s instruction. Acting President of NC District Committee, Tanahu, Jit Prakash Ale, and NC Provincial Assembly member, Sarita Gurung, were also arrested along with Paudel.

They were arrested on the charge of violating prohibitory order issued by the local administration.

Earlier in the day, clashes had occurred between NC and NCP cadres at Damauli Bazaar over the inauguration of the bridge. Six cadres of the NCP-aligned Youth Association Nepal were also arrested earlier when they tried to picket Tanahun District Administration Office against its decision to let Paudel inaugurate the bridge.

Issuing a press statement on Wednesday, Deuba denounced the arrest and “police’s misbehavior towards Paudel” while also warning the government to “immediately release him or stand ready to face any untoward incident arising out of this”.

Local NC leaders had staged a demonstration outside the police office and briefly obstructed vehicular movement along the Prithivi Highway protesting against the arrest.

Police had to fire dozens of tear gas shells and use batons to disperse the crowd of NC supporters. Scores of NC leaders and cadres along with six police personnel were injured in the incident, police informed.