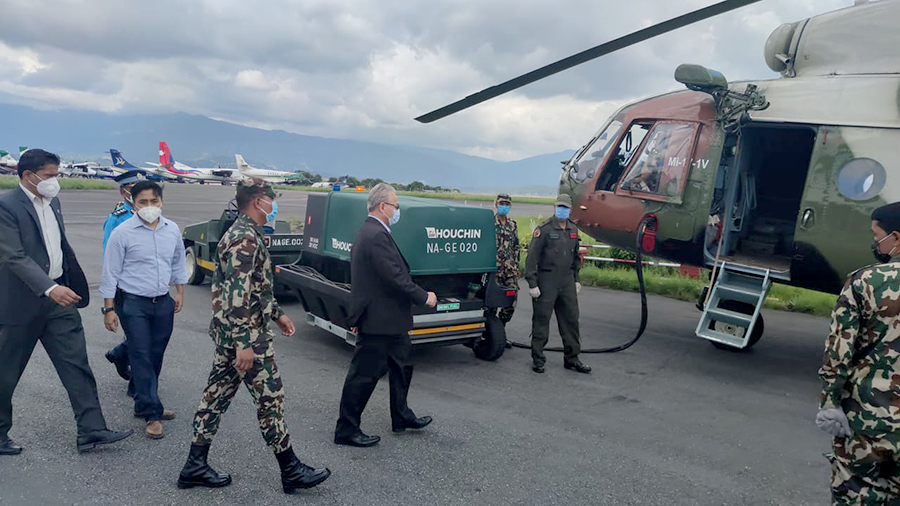 A team comprised of Baglung Chief District Officer, District Police, Armed Forces and District Chief of Army left for Dhorpatan in four vehicles at around 6:00 am on Thursday after wards 7, 8 and 9 of Dhorpatan Municipality were severely hit by floods and landslides on Wednesday night.

A team of about 26 police, armed forces, and army personnel also made a journey of around seven hours to the incident site upon receiving information that Home Minister Ram Bahadur Thapa was arriving.

As the Nepal Communist Party’s (NCP) secretariat meeting was scheduled at 3:00 pm on Thursday, Minster Thapa was to return from the site on time to attend the meeting.

He flew from Kathmandu for Baglung in an Army MI-17 helicopter, but had to land in Pokhara due to unfavourable weather in Dhorepatan.

The team had flew from Kathmandu at around 8:45 am and returned from Pokhara without vising the devastation site at 2:30 pm. Minister Thapa; Chief Executive of the National Disaster Risk Reduction and Management Authority, Anil Pokhrel; members of the NCP secretariat along with the crew were aboard the helicopter whose hourly rental fee stands at Rs 774,279.

The rental fee for the helicopter is to be paid by the National Disaster Management Fund.

In most cases of natural disasters, the District Disaster Management Committee, headed by the Chief District Officer under the federal government, actively participate in relief distribution and rescue process.

Given the incident’s gravity, it is common for a monitoring team from the central government to visit the site sometimes. However, no strategy is ever formulated on rehabilitation of people displaced by the landslide despite the high-level teams visiting such sites immediately after the incidents.

Moreover, the relief goods said to be brought by the Home Minister from Kathmandu on a helicopter could have been distributed by the district administration and/or the state government.

This is not the first time that Minister Thapa and his team from the central government incurred millions in travel costs. In the last 20 days, Home Minister Thapa has travelled to landslide-hit Sindhupalchowk, Achham, and Bajura districts carrying relief packages in a MI-17 helicopter.

The tendency of Home Minister Thapa, who is also the chairperson of the National Disaster Management Committee, reaching disaster sites via military helicopter has incurred huge bills to be paid by state coffers. His travel costs are higher than the budget issued for the relief of disaster victims.

Officials at the Home Ministry said that around Rs 3.5 million of the disaster management fund has already been spent for the use of army helicopters in the last four incidents. According to an aviation expert, the Home Minister has spent more than five hours flying from-and-to Kathmandu-Achham, Kathmandu-Sindhupalchok and Kathmandu-Pokhara via helicopters.

Nepal Army has fixed Rs 744,279 per hour for its MI-17 helicopters; Rs 374,181 per hour for Augusta Westland; Rs 199,280 for Vail; and Rs 202,880 per hour for Ikurel as rental charges. According to Nepal Army, helicopter rent increases if they have to fly at higher altitude, in case of bad weather, and emergencies.

He said that renting helicopters for an exorbitant price and state members reaching disaster sites in a random manner raises the question whether the citizens’ tax money is being properly utilized.

He added, “If the local and state governments are not strengthened and instead have to await central government’s help for everything, then the condition of federalism would be like that of a child who is not taught to walk but instead is taught to always looks for parents’ assistance.”