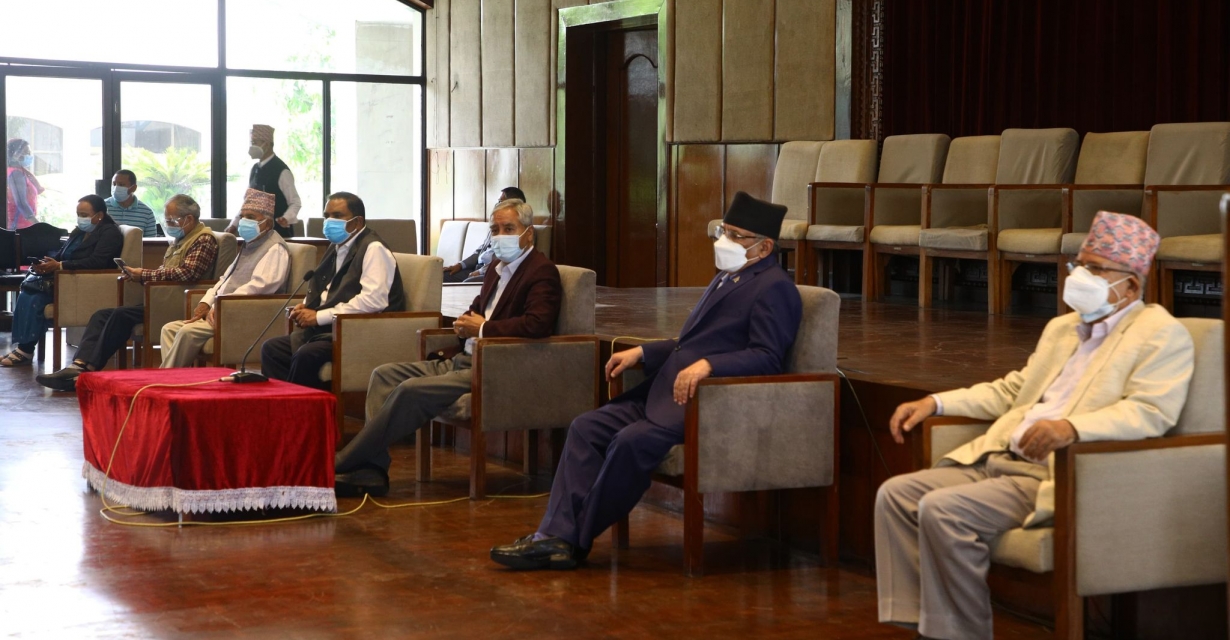 A coalition of five political parties has decided to wage a political and legal battle against President Bidya Devi Bhandari’s move to dissolve the House of Representatives at the recommendation of caretaker prime minister, KP Sharma Oli.

A meeting of the Nepali Congress, CPN-Maoist Center, Khanal-Nepal faction of UML, Upendra Yadav faction of Janata Samajwadi Party and Rastriya Janamorcha Party held at the Parliament House in New Baneshwor on Saturday decided to go move court on Sunday with a collective writ against the ‘unconstitutional’ move by President Bhandari and Prime Minister Oli.

The coalition is preparing to file a writ petition on behalf of the 149 people who signed the letter of demand submitted to the President’s Office on Friday to appoint Nepali Congress President Sher Bahadur Deuba as the Prime Minister.

Deuba is claiming to have the support of 61 candidates from Nepali Congress, 49 from CPN-MC, 26 from the Khanal-Nepal faction of CPN-UML, 12 from the Yadav faction of the Janata Samajwadi Party and one from the Rastriya Janamorcha.

Lawmakers of the coalition have been requested to be present at the Parliament House with their citizenship certificate on Sunday afternoon in order to file a writ against the unconstitutional move.

Coalition parties have also called on their respective party ranks to engage in political protests through virtual and other means keeping in mind the ongoing pandemic.

“We are determined to unite and protest politically and legally against the unconstitutional, undemocratic and regressive acts created by the President and the Prime Minister that have encouraged political uncertainty, confusion and anarchy in the country,” said Sher Bahadur Deuba, party president of Nepali Congress.

Deuba issued a separate statement on Saturday morning, expressing outrage that the president and prime minister had ‘taken the constitution as their personal property’.

“On the basis of the President’s call, I submitted my claim for the post of Prime Minister with the signatures of 149 honorable parliamentarians with a clear majority in the House of Representatives. Despite my constitutional claim to prime ministerial post, the president denied that I should be appointed prime minister immediately,” Deuba’s statement read.

“Instead, she sought to perpetuate Oli, who had failed to get the vote of confidence from the House of Representatives and had declared that he would be unable to garner clear majority in parliament, as the prime minister.”

He further added that the decision to reinstate Oli as prime minister was not only unconstitutional but also immoral.

Deuba accused that the President and the Prime Minister had abused their positions in their conspiracy to destroy the constitution.

“It is unconstitutional, undemocratic and authoritarian for the Prime Minister to suddenly recommend the formation of a new government and for the President to call for the appointment of a Prime Minister without giving even 24 hours,” he said.

The Janata Samajwadi Party, which had been protesting against the earlier dissolution, is divided this time.

Party chairman Mahanta Thakur and senior leader Rajendra Mahato’s faction have welcomed the move by President Bhandari and Prime Minister Oli, while the Yadav faction is in an alliance against the government.

Prime Minister Oli’s move has the support of only the Thakur faction of JSP and RPP. All other political parties and civil society are against it.

Prime Minister Oli had recommended to proceed with the process of appointing a new prime minister in accordance with Article 76 (5) without resigning, violating the mandatory provision of a vote of confidence.

“The general election, declared out of a desire to prolong its autocratic rule without an election, has put the lives of the people facing a terrible pandemic in a more serious crisis,” the opposition coalition has said.

President Bhandari had dissolved the House of Representatives at midnight Friday at the recommendation of PM Oli’s Cabinet and set the date for mid-term elections on November 12 and November 19.

Earlier, the prime minister had dissolved the House of Representatives on December 20 as well, but the Supreme Court quashed the government’s decision and termed it unconstitutional, and reinstated the Lower House.

The Oli-led government, meanwhile, is committed to spending Rs 40 billion from the country’s coffers to hold the forthcoming mid-term elections as the nation grapples for oxygen cylinders, vaccines, ventilators and other medical equipment in its fight against CPVID-19.

Meeting the officials of the Election Commission on Saturday, Prime Minister Oli urged them to start preparations for the mid-term election and expressed his commitment that there would no shortage of resources for the polls.

Oli says fresh elections could end the political confusion of recent months. Elections could be held despite the pandemic, he told reporters on Friday.

Nepal is battling a deadly second wave of the pandemic and is reporting more than 8,000 new infections on average each day. 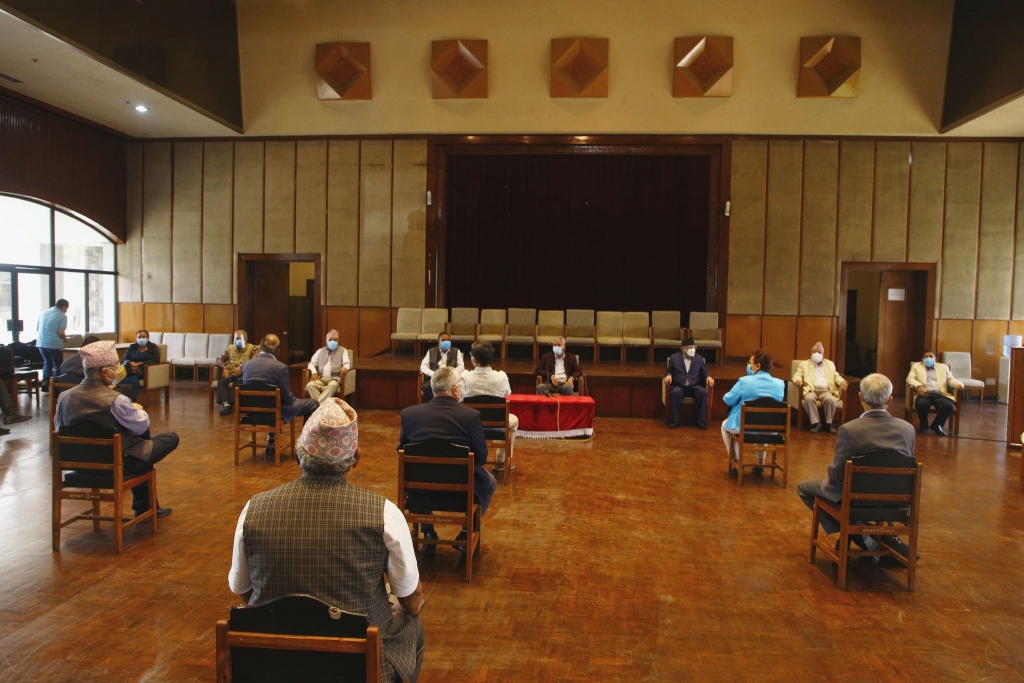 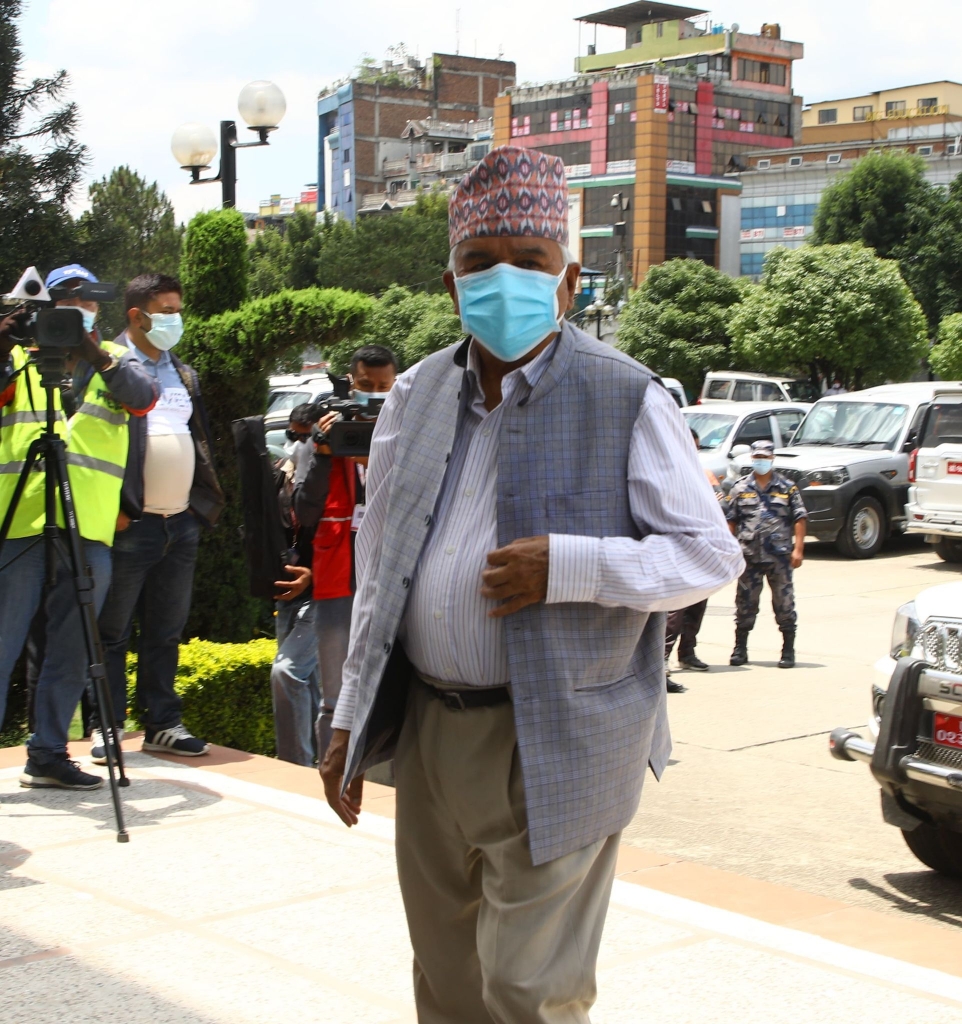