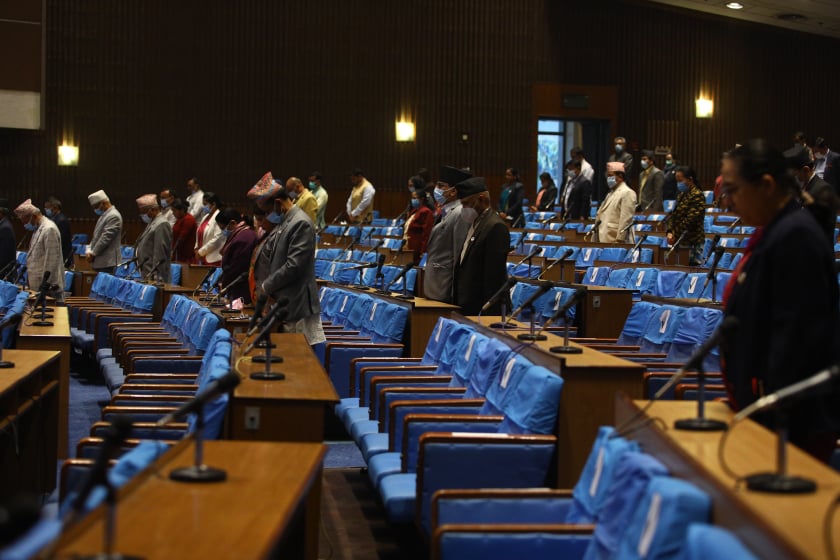 Opposition lawmakers in the House of Representatives on Wednesday protested against the government for mocking the parliamentary tradition and constitution by not giving it business.

They were of the view that Prime Minister KP Sharma Oli had showcased an utter lack of morality as he had put House sessions in a deadlock despite the court’s ruling that House sessions be resumed since his decision to dissolve the House of Representatives was unconstitutional.

Chief Whip of the CPN-Maoist Center Dev Prasad Gurung said that the government had repeatedly failed not tabled bills and ordinances in the House of Representatives and was trying to thwart the constitution.

“What is the government trying to do to the House?” He asked, adding that the Oli-led government was not yet able to accept the decision of the Supreme Court.

Similarly, Tek Bahadur Basnet of CPM-MC also said that the government had deliberately not given any business to the House of Representatives. “People have felt that the parliament has not been able to function effectively due to the government’s indifference,” he said.

Stating that the government had formed secret committees in various districts to record the warriors of democracy, he demanded detailed information about the same.

Meanwhile, UML’s Krishna Bhakta Pokhrel said that a constitutional crisis had surfaced as several ordinances could not be tabled at the first session of the House of Representatives.

Nepali Congress MP Dilendra Prasad Badu questioned whether Oli’s absence in the House meeting was a security threat or a moral issue.

Although there have been six sessions of the House of Representatives ever since its resumption, Prime Minister Oli has not attended a single session.

Referring to Oli’s absence, Badu said that Oli had made a public statement a few days ago that there was a security threat against him. He said with a hint of sarcasm, “The details of the threat should be made public. What is the Home Ministry doing now regarding the Prime Minister’s security?”

He added that the Prime Minister had made irresponsible remarks by questioning the security capabilities of his country.

Likewise, Parvati Kumari Bishankhe of CPN-MC drew the lawmakers’ attention towards increasing cases of violence against women and said the parliament should not remain silent on the issue.

Purna Kumari Subedi of CPN-MC said that works related to the Comprehensive Peace Agreement had not been completed for a long time. She questioned how long would the search for those missing in the Maoist conflict would last.

Rastriya Janamorcha MP Durga Poudel said that Resham Chaudhary should not be released from jail. Referring to the killing of a child in the Tikapur incident, of which Chaudhary was declared guilty and is serving life in jail, she said the issue should not be used as a chip for political bargaining.

Other lawmakers drew the government’s attention towards increasing cases of COVID-19 in India and Nepal’s need to be proactive, irregularities in medical education sector, impunity to corruption, increasing unemployment in the country, and military coup in Myanmar.