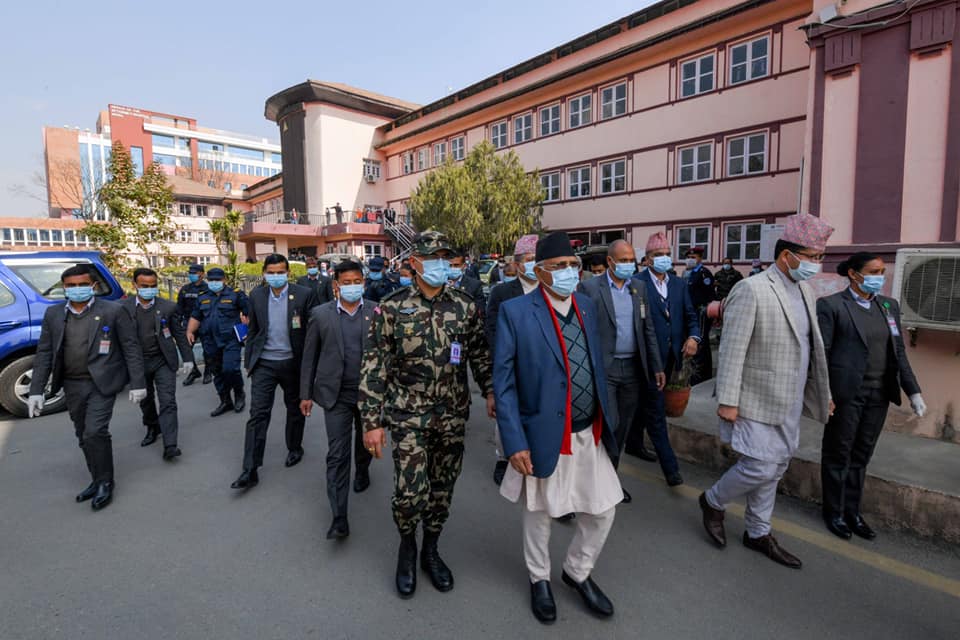 In his written response submitted to the Supreme Court on Thursday in relation to a contempt-of-court cases filed against him, Prime Minister KP Oli has claimed that the case was filed with the intention of earning cheap popularity and the court should discourage such pleas.

A single bench of Justice Manoj Kumar Sharma on January 28 had ordered the caretaker Prime Minister to be present at the Supreme Court within a week to furnish his written response.

Senior advocate Kumar Sharma Acharya and advocate Kanchan Krishna Neupane had filed the case against PM Oli, stating that he was giving views on a case sub-judice in court – dissolution of House of Representatives initiated by the Prime Minister himself – thereby interfering with the judicial work.

Acharya and Neupane had also charged the PM with contempt of court for his remarks against Senior Advocate Krishna Prasad Bhandari, 94.

Oli had mocked petitioners, who were challenging the legitimacy of his decision to dissolve the House of Representatives, for appointing a nonagenarian lawyer Bhandari to plead in their favour.

The PM had said, “They have taken ‘a grandfather lawyer’ to plead in their favour. Why are they doing such theatrics?”

“I and my government have always honored and implemented all the verdicts and orders given by the court,” he said.

Stating that the plaintiffs had picked his words out of context and arbitrarily interpreted them to be contemptuous, Oli claimed that he had never made any contemptuous remark against the court, nor would he ever do so.

Prime Minister Oli argued that it was necessary to check the tendency of people filing contempt of court cases against the sitting prime minister with the sole intention of earning cheap popularity.

The Constitutional Bench is currently dealing with 13 petitions against Oli’s surprise move in December last year to dissolve the parliament and call fresh elections a year ahead of schedule, a move that has triggered nation-wide protests amid the coronavirus pandemic and plunged the nation into a political crisis.

The court is expected to give its verdict in February.