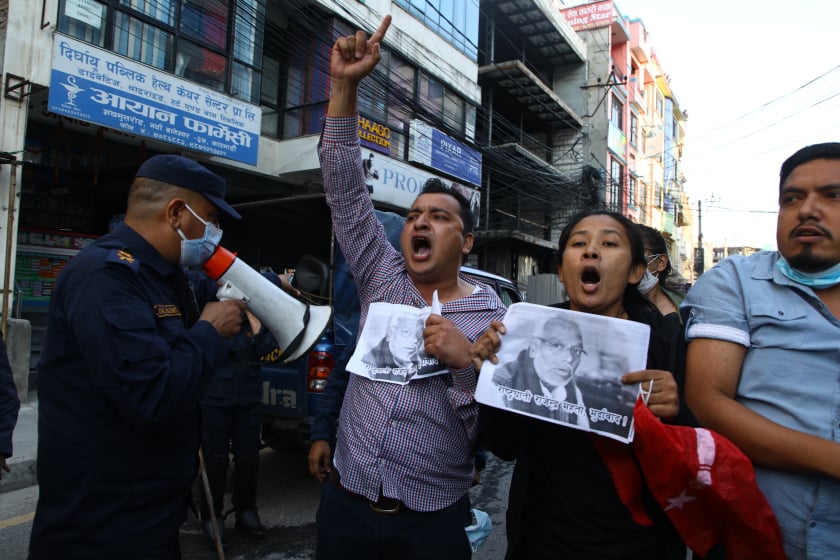 Police arrested 11 people student cadres loyal to the Madhav Kumar Nepal faction of CPN-UML on Saturday as they were protesting against a statement by newly appointed Deputy Prime Minister and Urban Development Minister Rajendra Mahato, in Kathmandu, on Saturday.

The protestors had burned Mahato’s effigy in New Baneshwor at around 6:00 pm.

Sudesh Parajuli, chairperson of the pro-Nepal ANNFSU, was among those arrested for violating the prohibitory orders imposed by the government amid the second wave of COVID-19. All of them were released a few hours later. 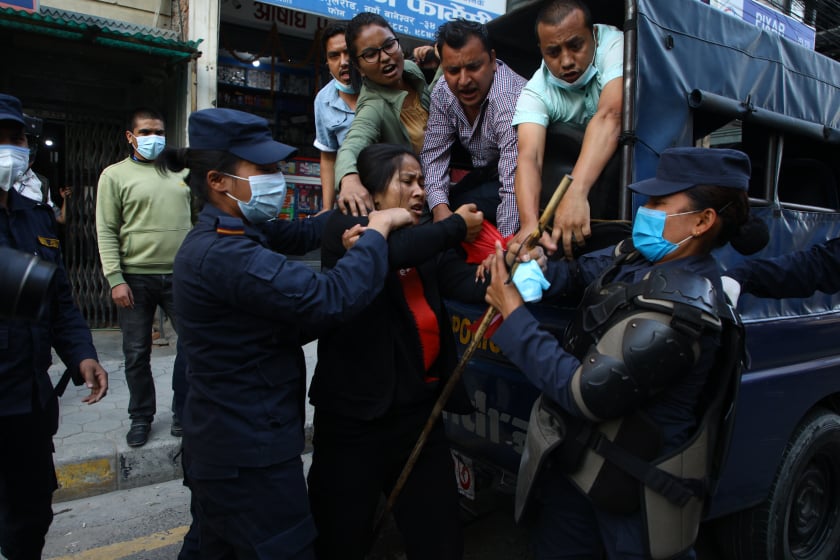 As many as 10 newly appointed ministers from the Mahato-Mahanta Thakur faction of Janata Samajwadi Party-Nepal (JSP-N) were sworn in to be a part of Prime Minister KP Sharma Oli’s Cabinet on Friday.

After taking the oath of office and secrecy at Singha Durbar on Friday, Deputy Prime Minister Mahato told the media persons that his party’s agenda was to establish a ‘multi-nation state’ and had joined the government to advance the agenda.

Parajuli said that they had to launch an agitation to condemn Mahato’s statement “against Nepal’s national unity and sovereignty”.

“We had no option but to protest amid the pandemic as Minister Mahato’s statement comes from divisive thinking and intentions,” he said.

According to leaders of the Khanal-Nepal faction, Mahato’s statement contradicts the definition of ‘nation’ in Article 3 of the constitution.

Article 3 of the constitution defined ‘nation’ as “having multi-ethnic, multi-lingual, multi-religious, multi-cultural characteristics with common aspirations of people living in diverse geographical regions, and being committed to and united by a bond of allegiance to national independence, territorial integrity, national interest and prosperity of Nepal, all the Nepali people collectively constitute the nation”.

After strong and extensive opposition to his statement, Mahato issued a statement late on Saturday night saying he was fully committed to national unity and integrity.

“As mentioned in Article 3 of the Constitution, Nepal is a multi-ethnic, multi-lingual, multi-religious, multi-cultural and geographically diverse nation. The intention of my statement was to say that Nepal is a country for all castes, castes, classes, communities, religions and genders,” said a statement issued by Mahato.

Madhes-centric parties have been raising their demands for political inclusivity and equal legal rights since the first Constituent Assembly of 2008. The demands of the Madhesi people are electoral constituencies on the basis of population, ensuring proportional representation and federalism.

Madhesis were involved in three phases of revolt—first in 2007, second in 2008 and the third in 2015. During the 2015 Constituent Assembly, the then Madhesi-centric parties — which were divided into several factions — had staged protests against the to-be promulgated constitution saying the statute had failed to address the political issues of Tarai-Madhes.

In order to address the Madhes-centric parties’ dissatisfaction, two articles of the constitution were amended (first amendment) during the then Sushil Koirala-led government.

However, the Madhesi-centric parties were not satisfied with the amendments and rejected the constitution. Later, the then Sher Bahadur Deuba-led government introduced the Second (constitution) Amendment Bill.

The bill could not be passed at that time due to the opposition of UML.