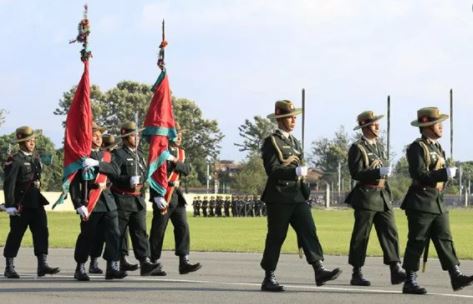 This year, the Nepal Army (NA) will organise a symbolic inauguration of the country’s one of biggest festivals, Dashain, on the seventh day called Fulpati, keeping in mind the spread of COVID-19.

NA, which has also been an integral part of the official celebration of Dashain in Nepal, will officially mark the beginning of the festivities by firing cannons and performing other rituals at the Army’s pavilion in Tundikhel.

NA Spokesperson, Santosh Ballav Poudel said, “Although there will be cannon firing on the day of Fulpati this Dashain, the celebration won’t be like that of last year.”

“We will continue our tradition, but without fanfare and gathering due to the grim scenario created by the deadly coronavirus,” Poudel said.

He said participants of the programme would be reduced by one-fifth while NA personnel to be present at the event will be scaled down by half its original number.

Meanwhile, President Baidhya Devi Bhandari, on the day of the event, will receive the guard of honour by only half of the regular number of army personnel.

Number of VIPs in the programme will also be heavily reduced, according to NA. In the past, over 1,000 guests used to watch the inauguration ceremony. The number of guests will be reduced to around 200 persons, except the NA personnel, this time around.