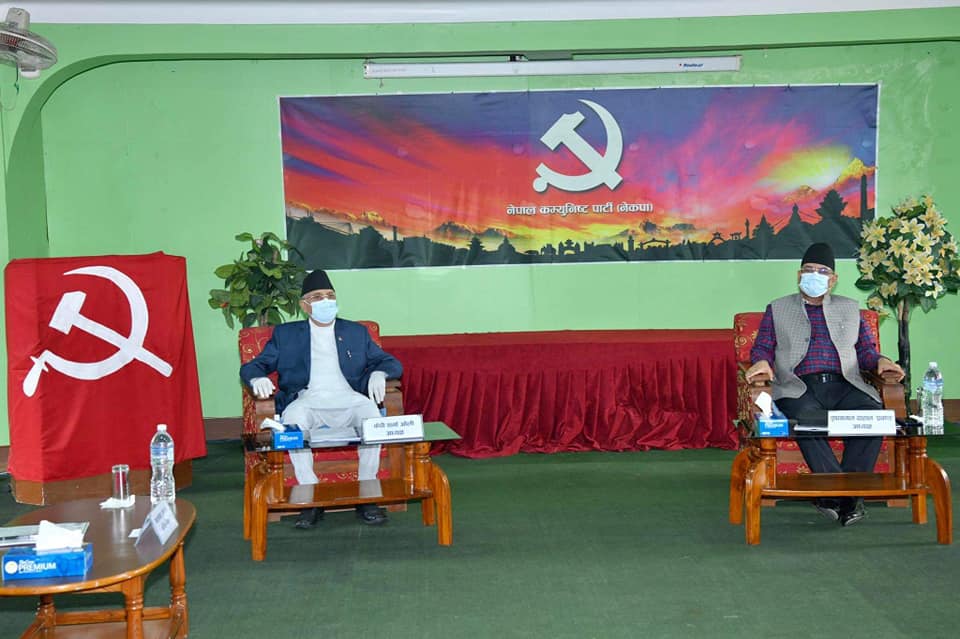 Nepal Communist Party (NCP) Secretariat has begun discussion on Cabinet reshuffle at its meeting held in Parisdanda on Sunday.

The meeting discussed policy issues regarding the Cabinet reshuffle but a concrete decision regarding the same has yet to be taken, informed NCP Spokesperson Narayan Kaji Shrestha.

Shrestha added that names of incoming or outgoing ministers were not decided on Sunday’s meeting, adding, “Secretariat members may discuss the names they want in or out of the Cabinet later with the prime minister.”

The Secretariat has listed Cabinet reshuffle, finalizing remaining tasks of party unification, and economic incentives to Central Committee members and full-time cadres as its agenda, according to Shrestha.

He informed that NCP provides monetary incentives to full-time cadres and leaders. “The Secretariat wants to decide on economic incentives for Central Committee members; provincial and local bodies can decide incentives for lower level leaders and cadres,” Shrestha added.

The Secretariat will also discuss appointments to constitutional bodies besides the issue of filling vacant posts in the party’s Central Committee and Standing Committee.

The Secretariat will also dwell on allowances for lawmakers for their work during COVID-19 pandemic, Shrestha added.

Though previous Secretariat meetings were held at the official residence of Prime Minister KP Sharma Oli in Baluwatar, Sunday’s meeting was held in Parisdanda which is the headquarters of former CPN-Maoist Center.

Changing the meeting venue is reflective of the delegation of full executive power to party Co-chair Pushpa Kamal Dahal.

Intra-party rift in NCP as well as between Oli and Dahal led the ruling party to the brink of split recently, but the two leaders buried their hatchet after a six-member task force suggested ways for truce between the warring sides.

Dahal became the executive chairman of the party as per the advice of the six-member task force.