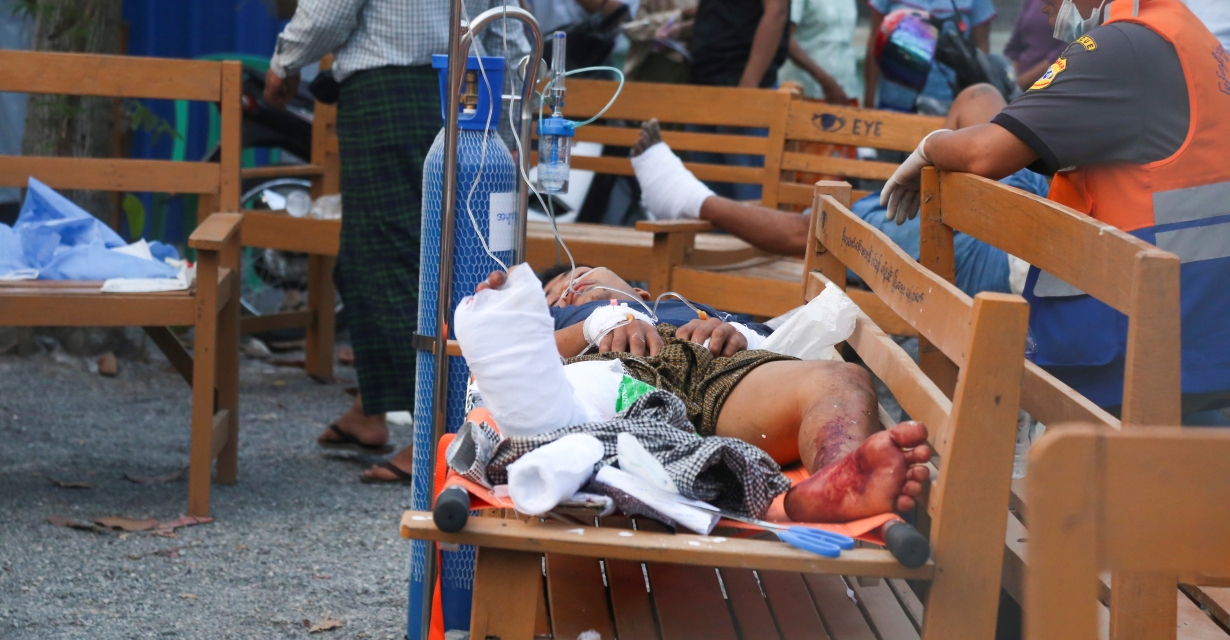 SENSITIVE MATERIAL. THIS IMAGE MAY OFFEND OR DISTURB An injured man is seen after protests against the military coup, in Mandalay, Myanmar, February 20, 2021. REUTERS/Stringer
Myanmar protesters gather again after worst day of violence
Read Time: 4 minutes

Opponents of Myanmar’s February 1 military gathered again on Sunday, undeterred by the bloodiest day of their campaign the previous day when police and soldiers opened fire in the second city of Mandalay, killing two.

Early on Sunday, police arrested a famous actor wanted for supporting opposition to the coup, his wife said, while Facebook deleted the military’s main page under its standards prohibiting the incitement of violence.

The military has been unable to quell the demonstrations and a civil disobedience campaign of strikes against the coup and the detention of elected leader Aung San Suu Kyi and others, even with a promise of a new election, arrests and warnings against dissent.

In the main city of Yangon, several thousand young protesters gathered near the city’s main university campus to chant slogans, while hundreds massed peacefully in Mandalay, footage shown by a media outlet showed.

People also marched in the central towns of Monywa and Bagan and the southern towns of Dawei and Myeik.

“The number of people will increase today and we won’t stop. We’ll continue to our goal of democracy,” said Yin Nyein Hmway at the Yangon protest.

The more than two weeks of protests had been largely peaceful, unlike previous episodes of opposition during nearly half a century of direct military rule, which ended in 2011.

Some of the demonstrators fired catapults at police as they played cat and mouse through riverside streets. Police responded with tear gas and gunfire at the protesters, witnesses said.

Video clips posed on social media also showed members of the security forces firing and witnesses said they found the cartridges of live rounds and rubber bullets on the ground.

Two people were shot and killed and 20 were wounded, said Ko Aung, a leader of a volunteer emergency service.

Police were not available for comment but the state-run Global New Light of Myanmar newspaper accused the strikers of sabotaging vessels and attacking police with sticks, knives and catapults.

Eight policemen and several soldiers were injured, it said.

The newspaper did not mention the two deaths but said: “Some of the aggressive protesters were also injured due to the security measures conducted by the security force.”

A young woman protester became the first death among anti-coup demonstrators on Friday. She was shot in the head on Feb. 9 in the capital, Naypyitaw.

The army says one policeman has died of injuries sustained in a protest.

Suu Kyi’s National League for Democracy (NLD) condemned the violence in Mandalay as a crime against humanity.

The army seized power after alleging fraud in Nov. 8 elections that the NLD swept, detaining Suu Kyi and others. The electoral commission had dismissed the fraud complaints.

The Myanmar military is known as the Tatmadaw.

Early on Sunday, police arrested actor Lu Min, who has been a prominent figure in protests in Yangon and was one of six celebrities who the army said on Wednesday were wanted under an anti-incitement law for encouraging civil servants to join the protest. The charges can carry a two-year prison sentence.

His wife, Khin Sabai Oo, said in a video posted on his Facebook page that police had come to their home in Yangon and taken him away.

Military spokesman Zaw Min Tun, who is also the spokesman for the new military council, has not responded to repeated attempts by Reuters to contact him by telephone for comment.

He told a news conference on Tuesday the army’s actions were within the constitution and supported by most people, and he blamed protesters for instigating violence.

The Assistance Association for Political Prisoners activist group says 569 people have been arrested, charged or sentenced in connection with the coup.

Western countries that earlier condemned the coup spoke out against the violence.

Suu Kyi faces a charge of violating a Natural Disaster Management Law as well as illegally importing six walkie-talkie radios. Her next court appearance is on March 1.