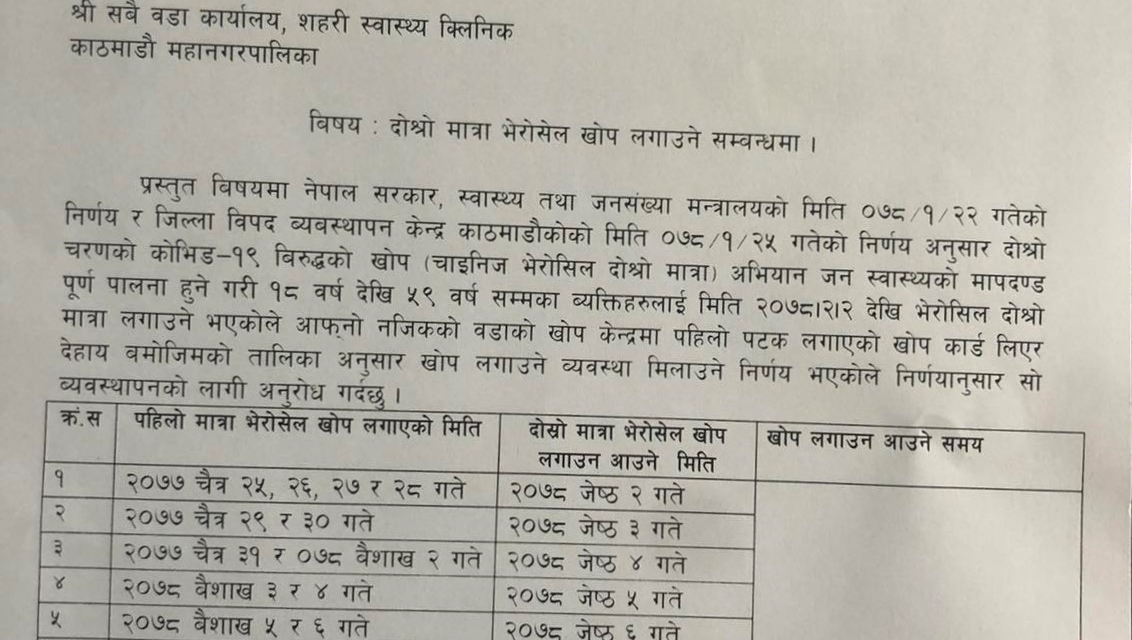 The Kathmandu Metropolitan City office has issued a notice detailing the dates to administer second dose of the China-made anti-COVID vaccine ‘Vero Cell’.

The inoculation drive for send dose is scheduled to begin on May 16 and end on May 25.

The notice states that eligible people can visit the vaccination center located near them as per convenience.

Meanwhile, a couple of hospitals listed as vaccination centers said that they had not yet received any notice from the government regarding the inoculation drive and neither any vaccines for the second dose.

The government had begun inoculating citizens with Vero Cell vaccines from April 7 in the Kathmandu Valley.

Though frontline health workers, traders working across the Sino-Nepal Border and Nepali students studying in China among others were prioritized for the jab, the government later broadened the eligibility criteria to all those willing within the age group of 18-59.

Meanwhile, the Ministry of Health and Population has asked adults over 18 years that haven’t received anti-COVID vaccines yet but are willing to receive their first dose to fill in an online form in order to register.

Link to get registered for vaccine — https://vaccine.mohp.gov.np/

Similarly, Grandi Hospital and Tokha Chandeshwari Hospital have been designated as vaccination centers in Tokha Municipality.

Ayurveda Research and Training Center, Bishnu Devi Hospital and Panga Health Post have been designated as vaccination centers in Kirtipur.