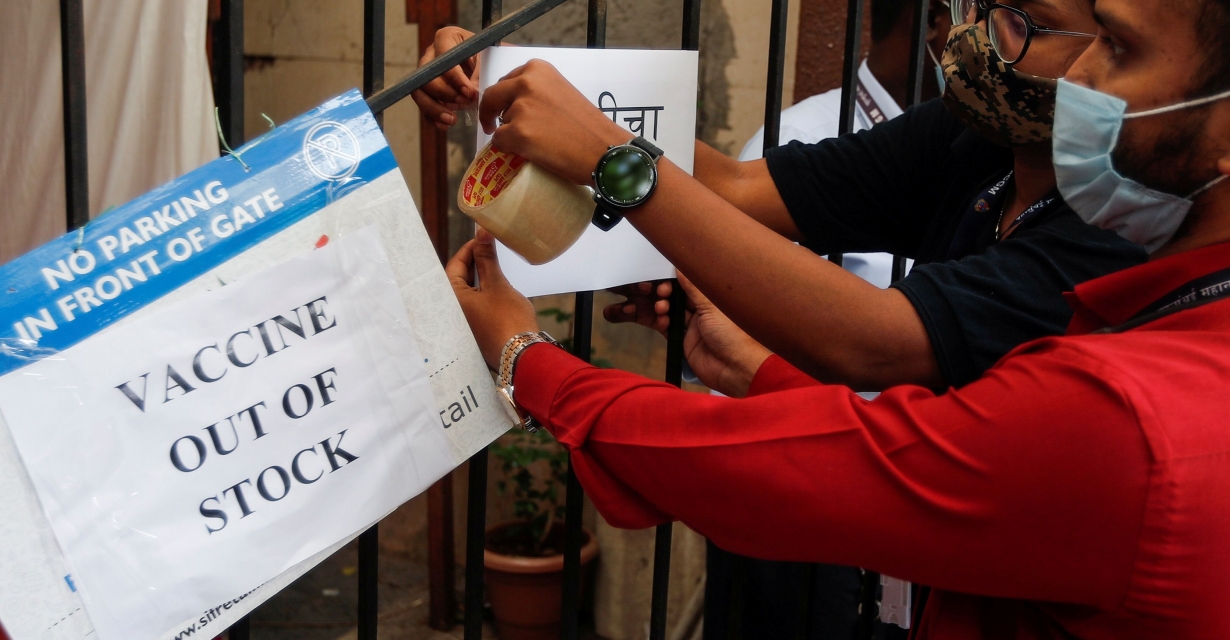 India will let all citizens over 18 have COVID-19 vaccinations from May 1, the government said on Monday, as the health system creaked under the weight of record-high cases and the capital region of New Delhi ordered a lockdown.

Facing growing criticism over its handling of the second wave of the pandemic, Prime Minister Narendra Modi’s administration said vaccine manufacturers would have to supply 50% of doses to the federal government and the rest to state governments and the open market at a pre-declared price.

Hospitals have a shortage of beds, oxygen and key medicines, and infections have passed 15 million, the world’s second highest total after the United States.

Criticism of Modi’s administration has increased as he continued to address large state election rallies and let Hindu devotees congregate for a festival.

New Delhi joined 13 other Indian states that have decided to impose restrictions, curfews or lockdowns in their cities, including the richest state of Maharashtra and Modi’s home state of Gujarat, where the industrial city of Ahmedabad is also grappling with a shortage of beds.

Hong Kong said late on Sunday that the Asian financial hub will suspend flights from India, Pakistan and the Philippines from Tuesday for two weeks.

Britain has put India on a travel “red-list” and Prime Minister Boris Johnson cancelled a planned trip to India next week.

As of Monday, India had administered nearly 123.9 million vaccine doses – the most in the world after the United States and China, though it ranks much lower in per capita vaccination.

The current vaccination process is controlled by the federal government.

Liberalising it would augment vaccine production and availability, and attract new domestic and international vaccine manufacturers, the government said in its statement.

“It would also make pricing, procurement, eligibility and administration of vaccines open and flexible, allowing all stakeholders the flexibility to customise to local needs and dynamics,” it said.

Gas and firewood furnaces at a crematorium in the western Indian state of Gujarat have been running so long without a break during the COVID-19 pandemic that metal parts have begun to melt.

And with hospitals full and oxygen and medicines in short supply in an already creaky health system, several major cities are reporting far larger numbers of cremations and burials under coronavirus protocols than official COVID-19 death tolls, according to crematorium and cemetery workers, media and a review of government data.

Reliable data is at the heart of any government response to the pandemic, without which planning for hospital vacancies, oxygen and medicine becomes difficult, experts say.

Government officials say the mismatch in death tallies may be caused by several factors, including over-caution.

A senior state health official said the increase in numbers of cremations had been due to bodies being cremated using COVID protocols “even if there is 0.1% probability of the person being positive”.

Bhramar Mukherjee, a professor of biostatistics and epidemiology at the University of Michigan, said many parts of India were in “data denial”.

In Surat, Gujarat’s second largest city, Sailor’s Kurukshetra crematorium and a second crematorium known as Umra have cremated more than 100 bodies a day under COVID protocols over the last week, far in excess of the city’s official daily COVID death toll of around 25, according to interviews with workers.

Prashant Kabrawala, trustee of Narayan Trust, which manages a third city crematorium called Ashwinikumar, declined to provide the number of bodies received under COVID protocols, but said cremations there had tripled in recent weeks. 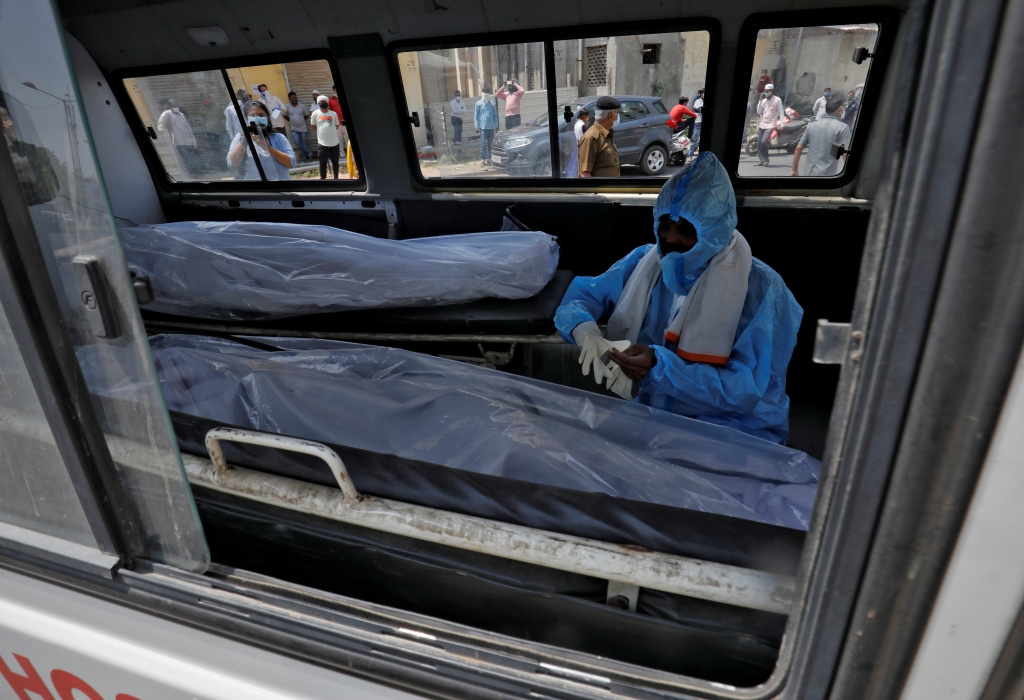 FILE PHOTO: A man wearing a protective suit sits next to the bodies of the victims of the coronavirus disease (COVID-19) inside an ambulance at a mortuary of a COVID-19 hospital in Ahmedabad, India, April 15, 2021. REUTERS/Amit Dave/File Photo 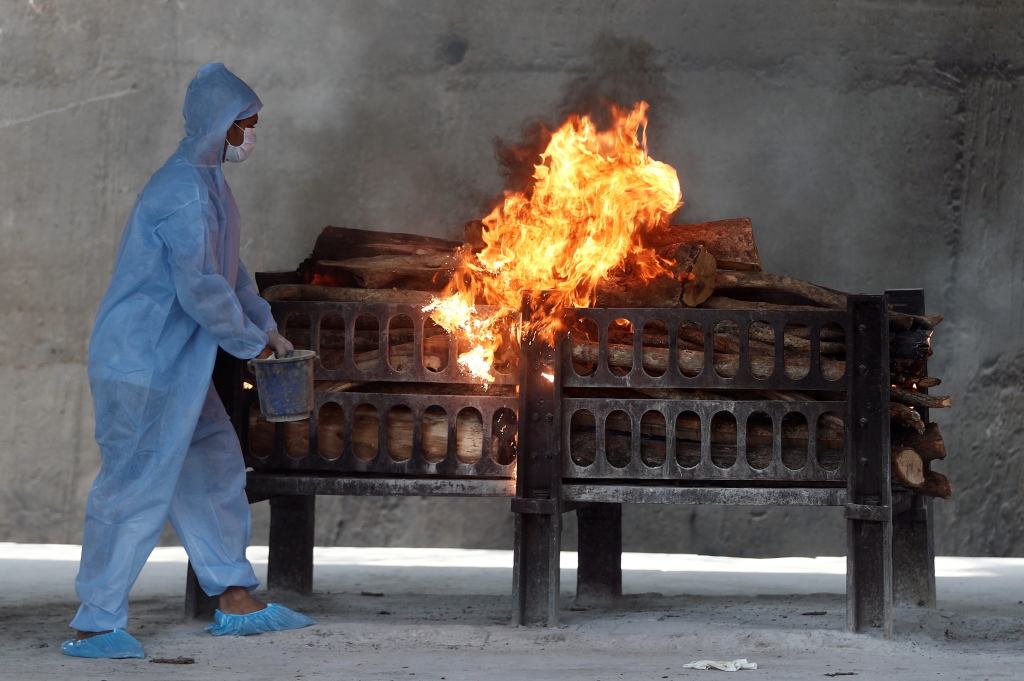 A frontline worker in personal protective equipment (PPE) sprays a flammable liquid on a burning funeral pyre of a man who died from the coronavirus disease (COVID-19), at a crematorium on the outskirts of Mumbai India, April 15, 2021. REUTERS/Francis Mascarenhas 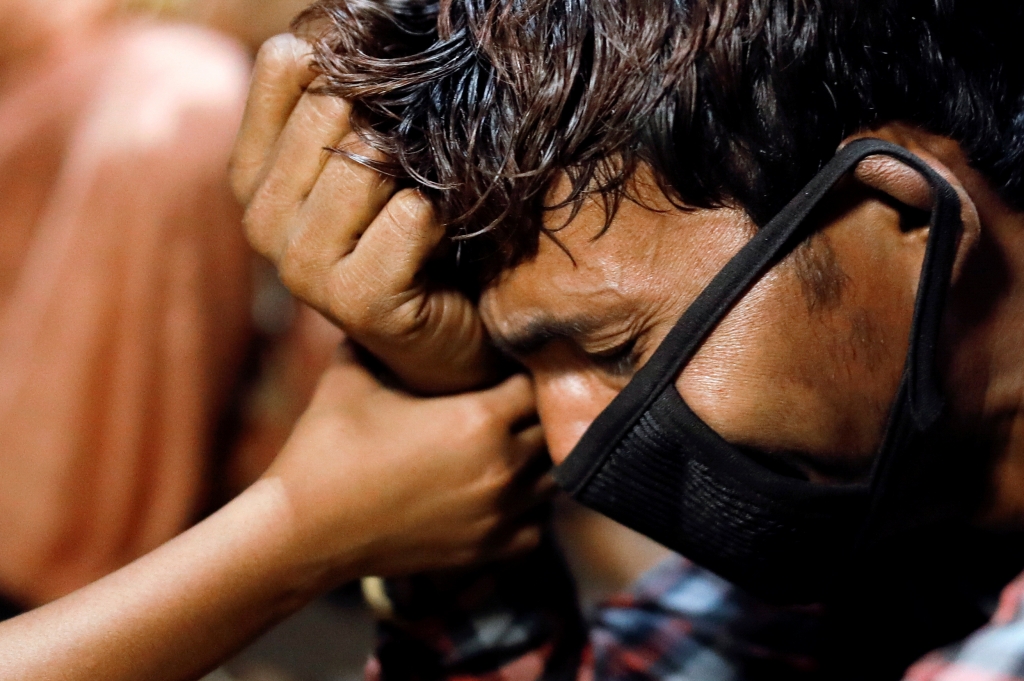 Migrant worker Anshul Kumar, 26, cries as he lost his money at a bus station, after Delhi government ordered a six-day lockdown to limit the spread of the coronavirus disease (COVID-19), in Ghaziabad on the outskirts of New Delhi, India, April 19, 2021. REUTERS/Adnan Abidi 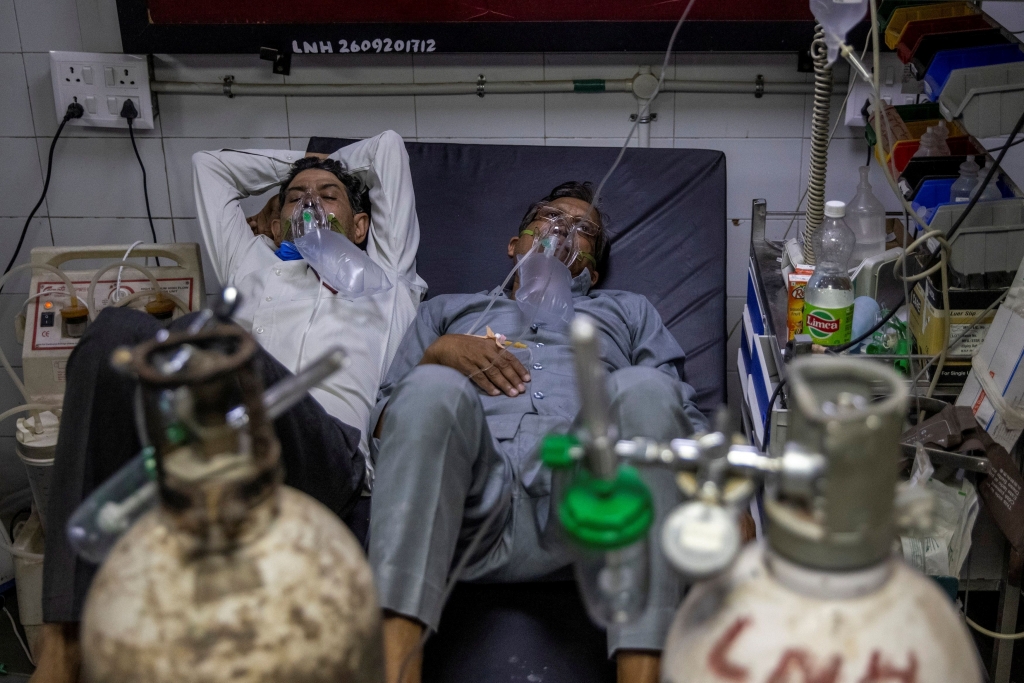 Patients suffering from the coronavirus disease (COVID-19) get treatment at the casualty ward in Lok Nayak Jai Prakash (LNJP) hospital, amidst the spread of the disease in New Delhi, India April 15, 2021. REUTERS/Danish Siddiqui TPX IMAGES OF THE DAY 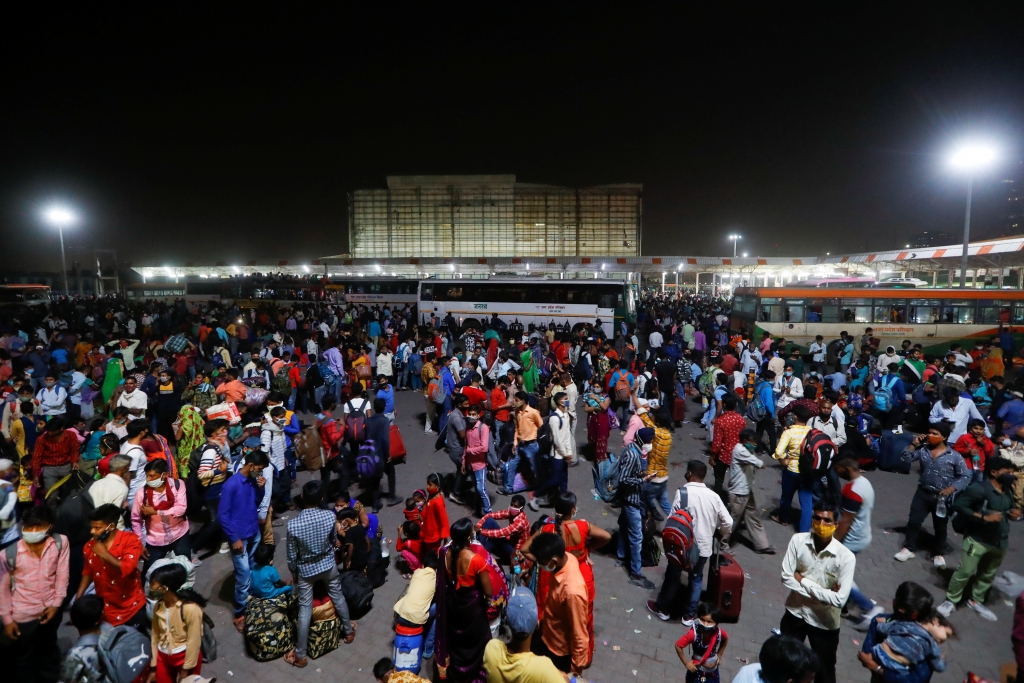 Migrant workers gather at a bus station to board buses to return to their villages after Delhi government ordered a six-day lockdown to limit the spread of the coronavirus disease (COVID-19), in Ghaziabad on the outskirts of New Delhi, India, April 19, 2021. REUTERS/Adnan Abidi 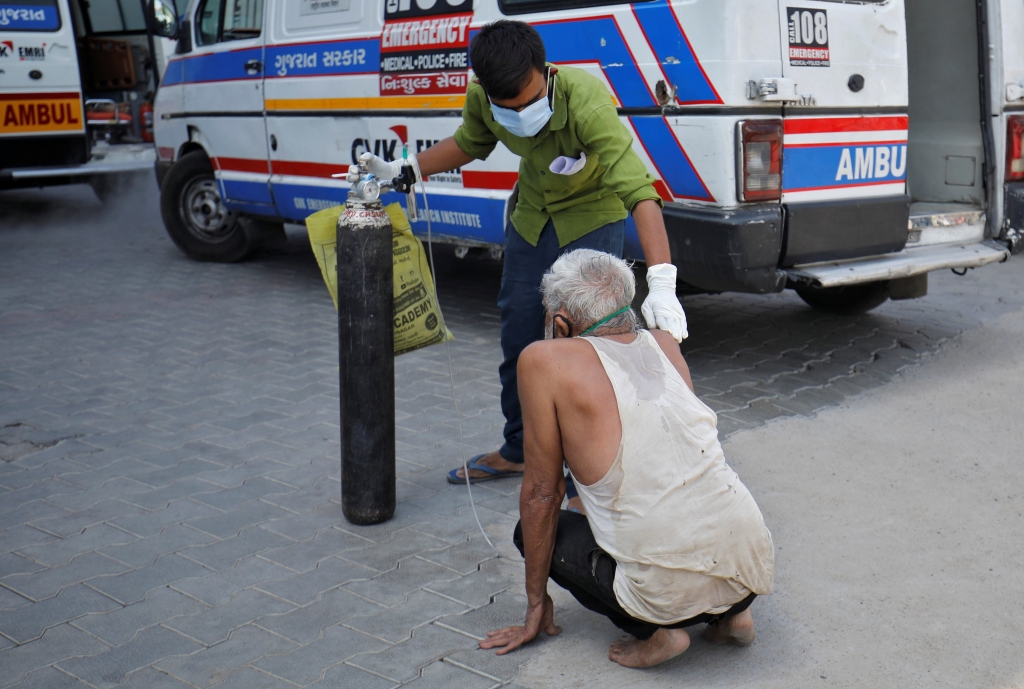 A patient with a breathing problem is helped by his relative to enter a COVID-19 hospital for treatment, amidst the spread of the coronavirus disease (COVID-19), in Ahmedabad, India, April 19, 2021. REUTERS/Amit Dave 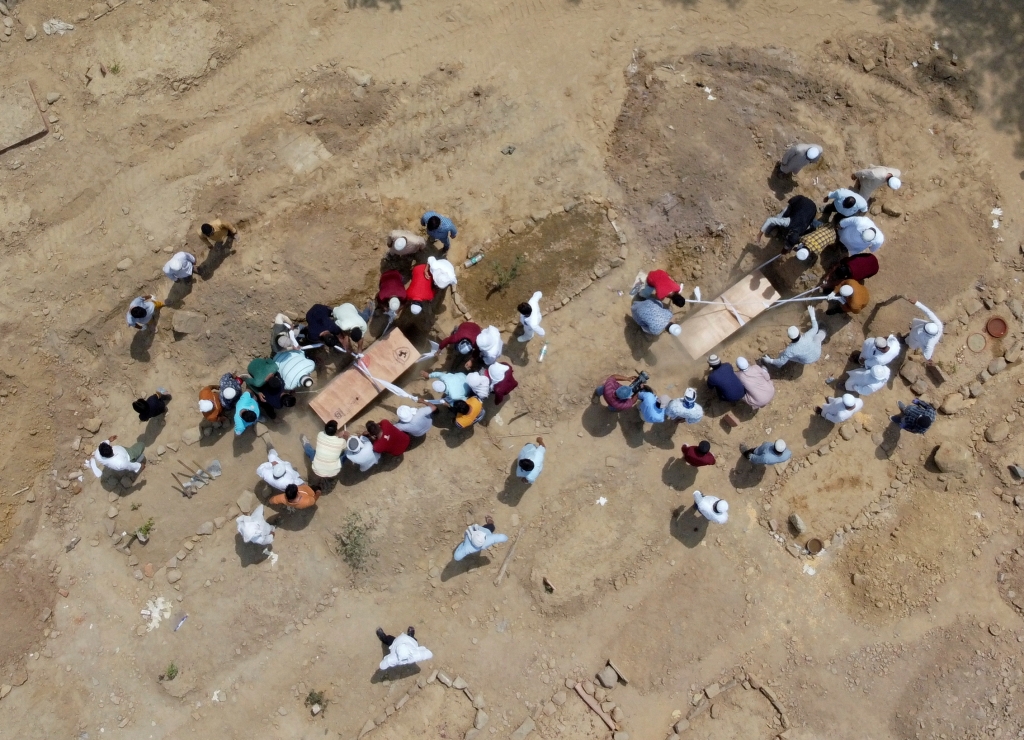 People bury the bodies of victims who died due to the coronavirus disease (COVID-19), at a graveyard in New Delhi, India, April 16, 2021. Picture taken with a drone. REUTERS/Danish Siddiqui TPX IMAGES OF THE DAY