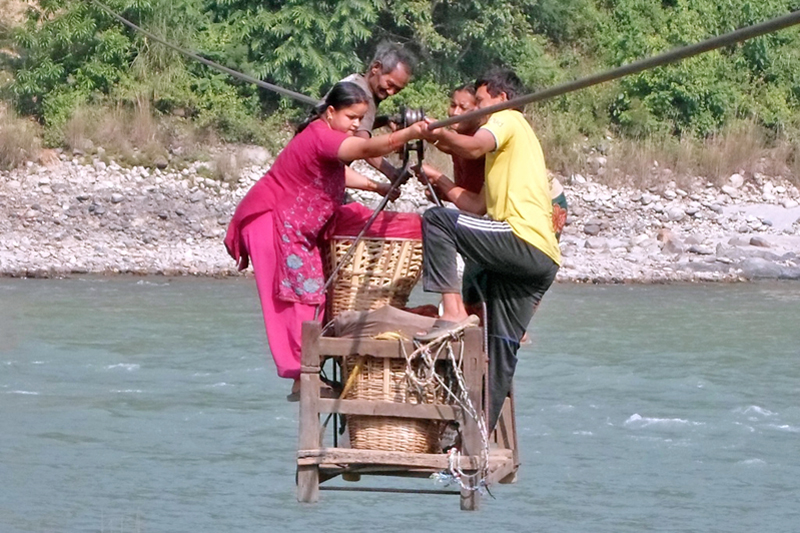 The Ministry of Home Affairs (MoHA) has directed the local administration of Darchula to find out the truth behind the death of man who fell down a tuin while crossing the Mahakali River in Malghat of Byas Rural Municipality of the district.

33-year-old Jay Singh Dhami fell off the tuin on Friday and went missing in the Mahakali River as he was crossing the river to reach his home in district headquarters Khalanga.

The only way to reach Khalanga is by crossing the Mahakali River with the help of tuin, a perilous manual ropeway, through the Indian territory.

Stating that MoHP was deeply concerned about the incident, Ministry Spokesperson Phanindra Mani Pokharel said that the local administration and security agencies had been instructed to thoroughly investigate the tragic incident.

A security team has been mobilized to find out the truth behind the incident and search for the missing person, he added.

The Ministry has also requested not to publish information and news in such a way as to create confusion, as the investigation into the incident is underway.

Meanwhile, Chief District Officer Siddharaj Joshi said that it was not yet clear how Dhami fell into the Mahakali River. Informing about the talks held with the Indian administration after the incient, CDO Joshi said that the Indian side had refuted the allegation that SSB personnel had cut off the cable.

The Indian side has claimed that SSB was not involved in Dhami’s disappearance and claimed that he fell into the river as he was throwing the cable to the other side after having crossed the river.

Pithoragarh India District Magistrate Ananda Swaroop said so in his reply to the letter sent by the District Administration Office Darchula after the incident on Friday.

Meanwhile, Kalyan Singh Dhami, who has been operating the tuin and helping people cross the river for 21 years now, said that SSB personnel had cut off the improvised cable as Dhami was crossing the river.

He added that the SSB personnel had ignored his plights to not cut off the cable as Dhami was still on his way.

The government has neither built bridges nor roads in the area. Therefore, the local residents had built the tuin at their own expense to cross the Mahakali and reach the district headquarters.

In Nepal, people who live along the banks of rivers like the Mahakali, Trishuli, Karnali and Seti use tuin for their daily affairs. There are 20 tuins currently in use in 43 districts around the country.

Nepal is home to more than 6,000 rivers and streams and most of them lack bridges. Many people have lost their lives and their fingers while crossing rivers using cable contraptions in the past, according to the Ministry of Federal Affairs and General Administration.