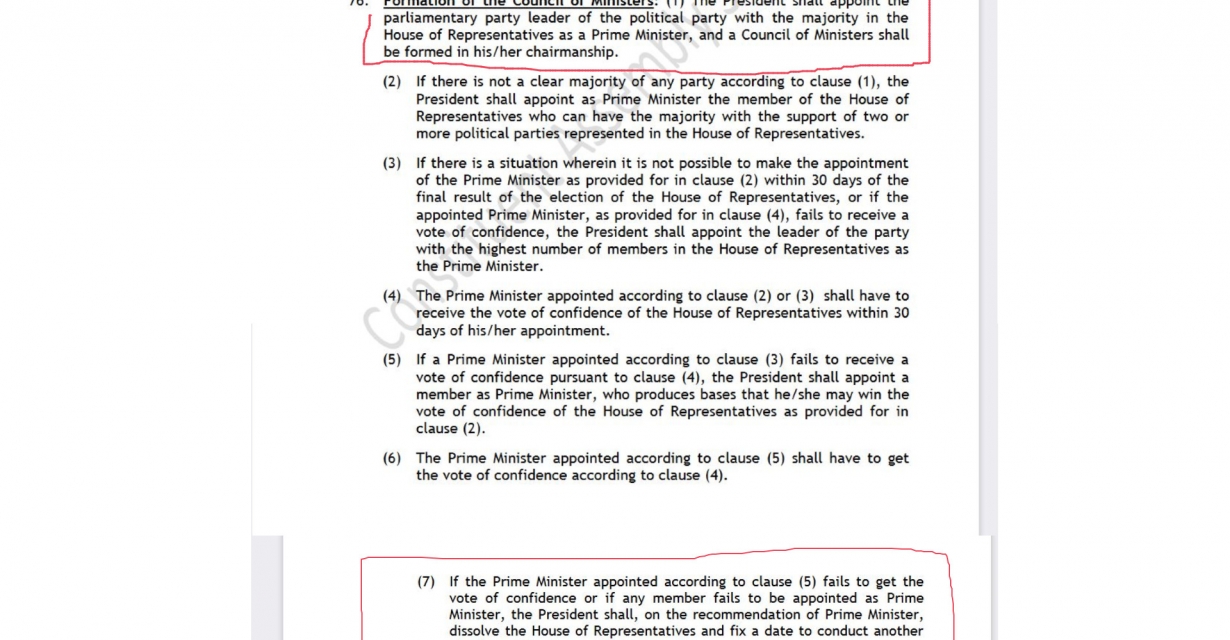 Hearing on writs against Parliament dissolution to begin today; Shameful that unconstitutional steps are being discussed for legality, say advocates
Read Time: 5 minutes

The Constitutional bench is scheduled to hear all 12 writ petitions, filed by different petitioners challenging the KP Sharma Oli-led government’s move of dissolving the House of Representatives (HoR), today.

On Wednesday, a single bench of Chief Justice Cholendra SJB Rana had decided to forward all petitions to the Constitutional bench.

Petitioners had argued that the Articles [76 (1) and (7) and 85] cited by the Office of the President to dissolve the Parliament on Sunday do not provide any ground for the dissolution.

They also said that Oli had breached the constitution and President Bidya Devi Bhandari supported him by authenticating the unconstitutional move. 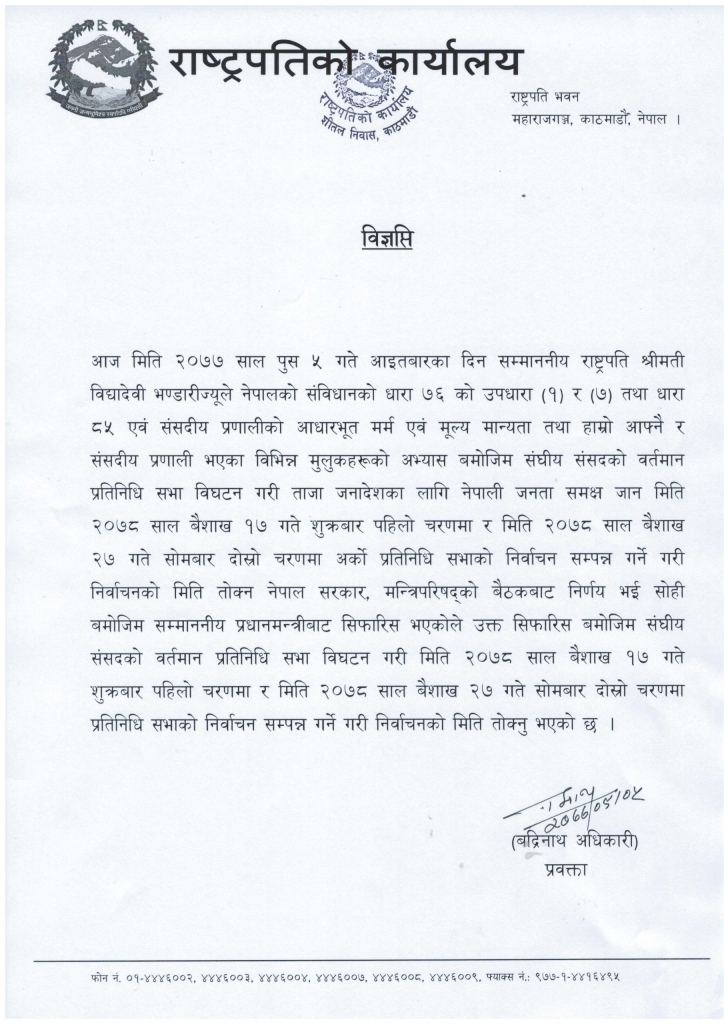 Rana refused to issue an interim order, as demanded by the petitioners, on Wednesday and said that the only Article in the constitution that talks about Parliament dissolution is 76 (7) and so the Constitutional bench will discuss the Article and take a decision.

Today’s session of the Constitutional bench will examine the basis for the recommendation of the said Articles i.e [76 (1) and (7) and 85] to dissolve the Parliament and primarily focus on Article 76 (7) for its constitutional relevance. 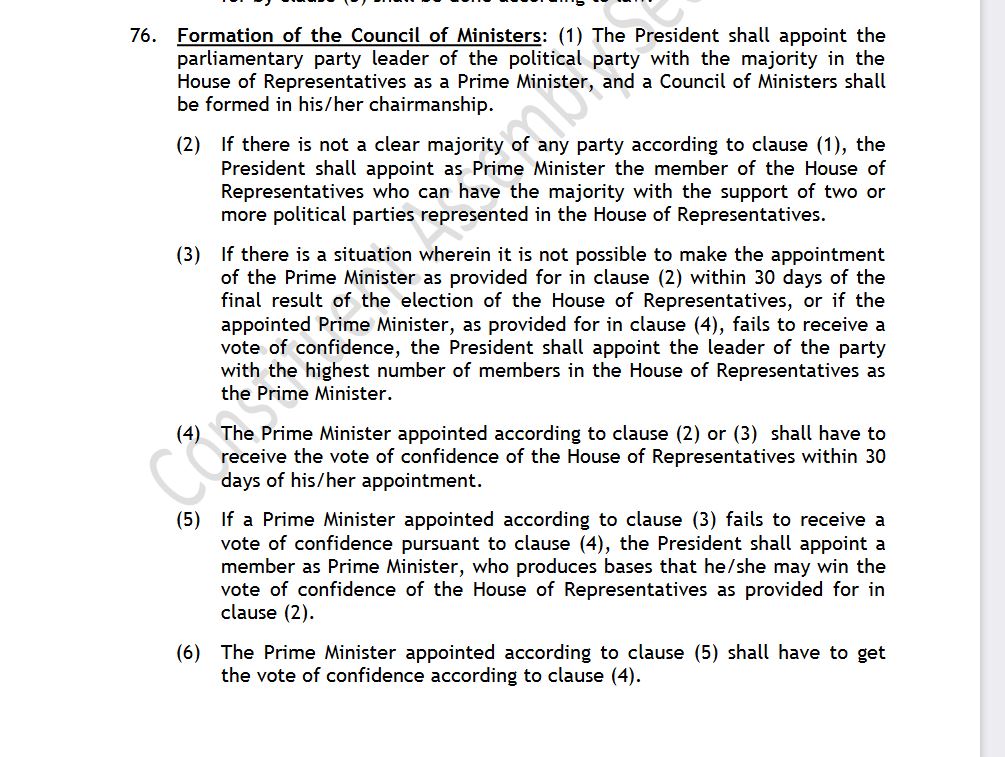 A screengrab of the unofficial English translation of the Constitution of Nepal 2015 released by the Constituent Assembly Secretariat.

A screengrab of the unofficial English translation of the Constitution of Nepal 2015 released by the Constituent Assembly Secretariat.

Prime Minister Oli has based his recommended for HoR dissolution on the phrase ‘basic values ​​and beliefs ​​of the parliamentary system’.

Radheshyam Adhikari, senior advocate and member of the National Assembly said, “It is absurd to quote ‘basic values ​​and beliefs ​​of the parliamentary system’ when someone is dissolving HoR through provisions that do not exist in the Constitution.”

“As repeated dissolution of Parliament under politicians’ personal whims had been destabilizing Nepali politics in the past, the new Constitution of 2015 was drafted in such a way that the Prime Minister cannot unconditionally dissolve the House of Representatives. Such clauses were kept in the new Constitution with the aim to give stability to the government,” Adhikari said.

According to the Office of the Attorney General, the Prime Minister’s Office had not sent the file of the decision and recommendation made during HoR dissolution till Thursday.

Senior advocate Hari Upreti said, “It mortifies me to see the government defend its decision, which is directly against the constitution, and I am ashamed of my legal profession as well as Nepal’s legal system at the moment.”

While all eyes are on the Constitutional bench, it is also important to note that shortly after the hearing on Wednesday, Chief Justice Rana had left to attend a program, also being attended by Prime Minister Oli, to inaugurate a new building of the Attorney General’s Office.

Oli and Rana sat next to each other during the programme where the PM was the Chief Guest and the Chief Justice the Special Guest.

As per the code of conduct for Judges issued by the Supreme Court, lawyers should not pursue unnecessary association with any parties involved in a case. The Code of Conduct states, “Such associations should be escaped in order to avoid a situation where a judge is unable to hear or resolve a dispute due to unnecessary or increased contact with either parties.”

However, Rana had attended the inauguration ceremony alongside Oli despite his loyalty being questioned from several sides.