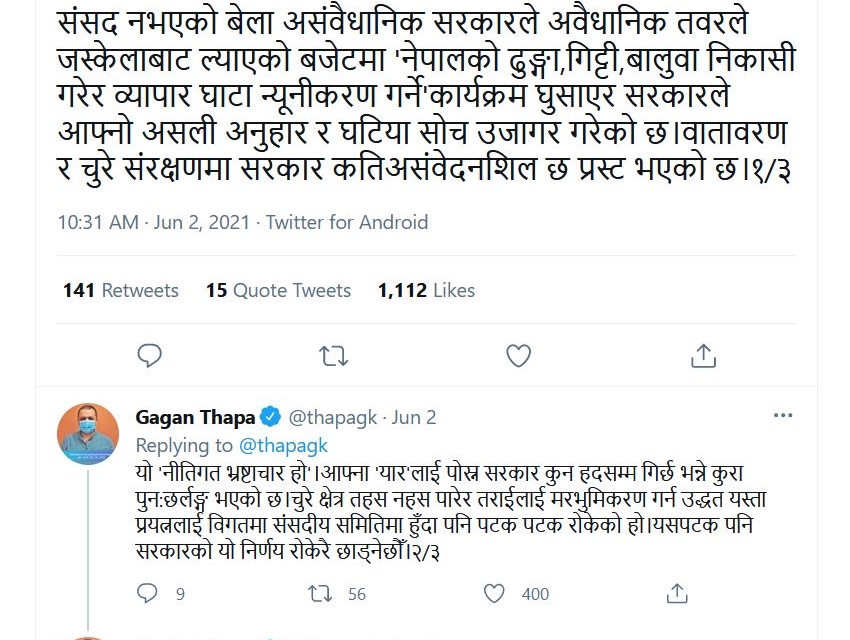 Nepali Congress (NC) leader Gagan Thapa along with leaders of opposition parties have condemned the government’s decision to allow export of natural resources, including stones, pebbles and sand.

The annual budget for fiscal year 2021/22 unveiled by Finance Minister Bishnu Poudel states that national trade deficit will be reduced through export of mineral-based construction materials including stones, pebbles and sand as per Environmental Impact Assessment.

The government has also granted customs duty waiver on transportation of mineral-based construction materials for ropeway.

NC leader Thapa took to Twitter and said the decision was a “policy corruption committed by the KP Sharma Oli-led government through the annual budget”.

“This unconstitutional government has exposed its ugly face by incorporating the provision for export of natural resources of the country in the budget, that too by bringing it illegally through ordinance. This is policy corruption,” he wrote.

He added that such a mover was tell-tale sign of the government’s insensitivity towards environment protection and Chure region preservation.

Similarly, former prime minister and CPN-MC chair Pushpa Kamal Dahal termed the decision as anti-national and anti-people. He took to his Facebook account to demand that the decision be withdrawn without delay to prevent desertification in the Tarai.

“The government intends to destroy the Chure region and cause ecological disaster on the pretext of reducing the trade deficit. It will lead to desertification of the fertile Madhes lands,” said Yadav in a press statement, demanding immediate withdrawal of the decision from the budget.

In defense of the government’s decision, the Ministry of Finance issued a press statement and said that the government was committed to protecting and conserving the Chure region.

“The government will make necessary provisions to enhance the export of natural construction materials without causing environmental impacts on the region and people by formulating and implementing directives, procedures, standards, and polices as per the suggestions of experts,” the statement reads.

The Chure region comprises the youngest mountains in Nepal and is located between the Tarai-Madhes in the south and the mid-hills in the north with 72.37% of the region covered by forests. Due to strong corporate pressures for extracting minerals and other raw materials for infrastructure projects, the annual deforestation rate is very high, according to Forest Resource Assessment Nepal Project / Department of Forest Research and Survey 2014.

Chure is also one of the main watersheds for the conservation of surface and underground water for the plain area and Tarai-Madhes.

This region is also highly valuable for its biodiversity, wildlife and their habitats and for maintaining connectivity between different protected areas in Nepal.

Indigenous people and local communities depend on this region for their livelihoods and other bio-cultural purposes.