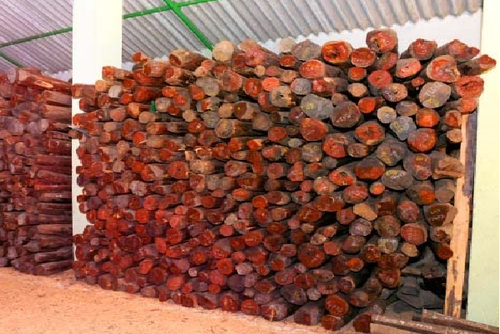 The government has decided to allow India to take back home 173,072 Kilograms of red sandalwood from Nepal within 90 days.

Nepal Police had confiscated the valuable wood that was being smuggled to China from India via Nepal over a period of a decade.

Red sandalwood, known as Rakta Chandan in Nepali, is a fragrant tropical hardwood tree which is endemic to southern India.

Gokul Prasad Baskota, Minister of Communications and Information, said red sandalwood would be handed over to the concerned Indian authority through the Ministry of Foreign Affairs as per Article VII of the International Trade in Endangered Species of Wild Fauna and Flora Control Act-2016.

Baskota informed of the decision at a press conference organized in Singha Durbar yesterday to disclose the decisions of the January 13 Council of Ministers.

Nepal and India both are member of CITES (the Convention on International Trade in Endangered Species of Wild Fauna and Flora), which has stipulated a provision of returning confiscated contraband to the country of origin.

“We have granted permission for India to take home the red sandalwood within 90 days. The transportation cost for returning the precious wood will be borne by India,” said Baskota.

The Ministry of Forests and Environment was having a hard time to manage the stash of red sandalwood seized from smugglers. At least four to five armed police personnel have been deployed to guard the red sandalwood on the premises of the Department of Forest in Babar Mahal.

Earlier, government authorities had said they were ready to hand over the contraband to India, the country of origin, after necessary verification, in accordance with existing national and international laws.