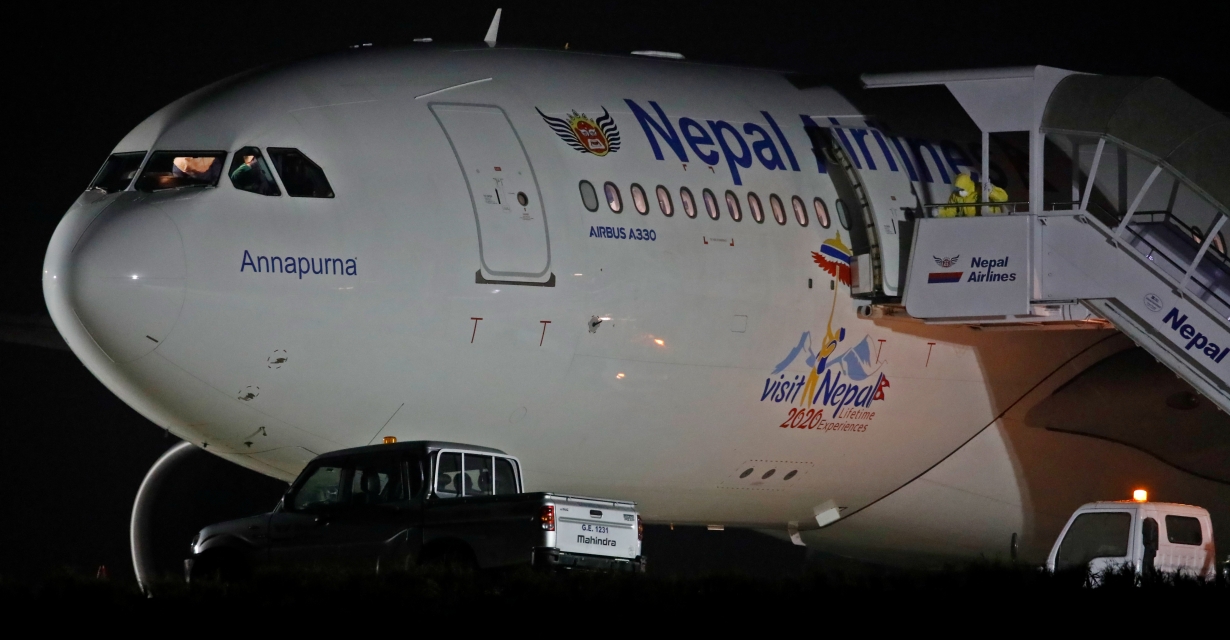 FILE PHOTO An official in protective suite prepares to evacuate 175 Nepalese nationals from a Nepal Airlines Airbus A330-200 plane arriving from coronavirus-stricken Chinese city of Wuhan before they were sent to be quarantine at Tribhuvan International Airport in Kathmandu, Nepal February 16, 2020. REUTERS/Navesh Chitrakar
Flights from coronavirus-hit countries still coming to Nepal
Read Time: 2 minutes

The Civil Aviation Authority of Nepal (CAAN) has yet to temporarily suspend in-bound flights from countries that have been badly affected by coronavirus despite the Supreme Court’s order.

CAAN informed that it had not recommended any domestic or foreign airline conducting direct and transit flights from coronavirus hotspots — China, South Korea, Japan, Iran and Bahrain — to halt flights to Nepal.

CAAN Spokesperson Raj Kumar Chhetri informed that they are waiting for the copy of the court’s verdict in order to take any steps towards halting flights.

On Monday, Supreme Court had issued an interim order directing the government to halt all direct and indirect flights from countries that pose high risk of coronavirus infection.

It can take days for CAAN to receive a copy of the court order as it has to pass through the Office of Attorney General and the Office of Prime Minister and Council of Ministers.

Coronavirus, first reported in China in December-end, has since spread to 72 countries, killing at least 3,111 and infecting around 91,000 people.

Nepal receives at least 14 flights per day from China. However, the number of flights has declined after the virus outbreak.

According to sources at Tribhuwan International Airport, China Eastern and Air China are conducting a flight each daily while China Southern is still operating three flights a day.

However, Tibet Airlines and Sichuan Airlines have cancelled all their Nepal-bound direct flights from China.

Himalaya Airlines, which flies to Beijing, Guiyang, Changsha and Chongqing every day, has temporarily suspended all its operations to China.

Nepal is still receiving one flight a day from Seoul via Korean Air and around 12 flights from Gulf countries every day.

Also on Monday, the government had decided not to issue on-arrival visas to citizens of China, South Korea, Japan, Italy and Iran until further notice.