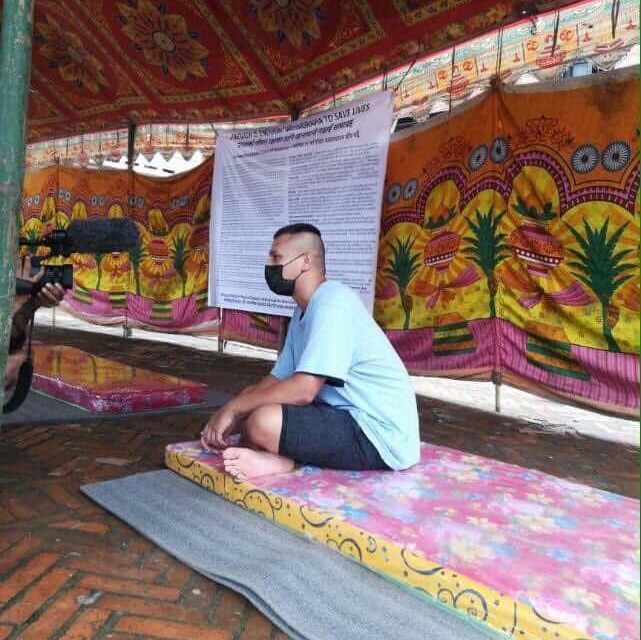 Nepal government has been indifferent in fulfilling the demands of youth activists of the Enough is Enough campaign who have been staging fast-unto-death strike for the second time since past ten days in Basantapur, Kathmandu demanding better government response to the COVID-19 pandemic.

Several youths have joined Iih, a 26-year-old activist of the ‘Enough is Enough’ movement, in the fast-unto-death being staged for the second time.

Earlier on July 7, Iih and Pukar Bam had ended their 12-day long hunger strike after signing a 12-point agreement with the Ministry of Health and Population to fulfil their demands regarding a better government response to COVID-19 and its spread.

The Ministry had agreed to eliminate RDT tests, increase PCR tests, and allow people to leave quarantine centers only after conducting PCR tests, among other things. The government had also agreed to increase the PCR test of health workers and other frontline workers.

Though the points of agreement were said to be executed within a week of signing, government authorities have been apathetic in its implementation till date, according to the activists.

“We do not have any other option but to resume the hunger strike as the government has turned a deaf ear to our pleas,” Bam said.

He added that none of the points in the agreement has been implemented properly. “To make matters worse, the government has reduced PCR tests.”

Dr Sameer Adhikari, who signed the 12-point agreement on behalf of the Health Ministry said, “We are working to change the operational guideline. Apart from that, almost every point of the agreement has been respected and followed.”

However, when asked about reduced number of PCR tests in the past few days, Dr Adhikari said that they had developed capacity to conduct more PCR tests at once, but the tests were being conducted on priority basis.