A putrid stench hangs over Sheikh Jarrah, a tiny neighbourhood of East Jerusalem where protesters are trying to prevent Israel evicting eight Palestinian families and letting Jews move in.

Over the past week, Israeli police have repeatedly fired a foul-smelling liquid known as skunk water that lingers through the night to try to disperse the demonstrators.

The standoff has seen violent clashes around the walled Old City and on Monday led to rocket fire by Gaza militants, drawing Israeli airstrikes on Gaza that health officials there said killed nine Palestinians.

It has also made Sheikh Jarrah an emblem of what Palestinians see as an Israeli campaign to force them out of East Jerusalem.

It is named after a personal physician to Saladin, the Muslim conqueror who seized Jerusalem from the Crusaders in 1187.

Israel seized the Old City, and the rest of East Jerusalem and the adjacent West Bank, in a 1967 war. It sees all Jerusalem as its capital, including Sheikh Jarrah, which contains a site revered by religious Jews as the tomb of an ancient high priest.

Palestinians live in most of Sheikh Jarrah’s homes, but Israeli settlers have moved in to some of its properties, saying they were owned by Jews before the 1948 Israeli-Arab war that followed the end of the British Mandate for Palestine.

Nabil al-Kurd, 77, is among the Palestinians facing eviction from the neighbourhood’s Othman Ibn Affan street after a long legal battle.

“Israel will not be satisfied until it kicks me out of the house I’ve lived in almost my entire life,” he said.

Half of his house taken over by Israeli settlers after a legal battle in 2009. A wall now divides him and his family from the settlers, and his hopes of staying are pinned on Israel’s Supreme Court.

Israel’s government has played down any state involvement, portraying it as a real estate dispute between private parties.

On Monday, Arab Israeli lawmakers were among protesters, some of them chanting “Settlers out!”, who faced off with several ultra-nationalist Israeli politicians along Othman Ibn Affan street. Police kept them apart.

The Palestinians have lived in Sheikh Jarrah since they were re-housed there in the 1950s by Jordan after fleeing or being forced to abandon their homes in West Jerusalem and Haifa during the fighting around Israel’s creation in 1948.

The settlers who filed the lawsuit over Othman Ibn Affan street said they bought the land from two Jewish associations that purchased it at the end of the 19th century.

A lower Israeli court found in favour of the settlers under an Israeli law that allows Jews to reclaim ownership of property lost in 1948. No such law entitles Palestinians to do the same in West Jerusalem or other parts of Israel.

At a settlers’ house across the street, an Israeli said the Supreme Court had rewarded Palestinians by delaying a hearing on the case as tensions rose.

“If anything they should have moved the ruling up,” said the settler, who gave his name only as Yaakov.

The United States is among critics of the evictions, raising the prospect of them becoming a diplomatic liability for Israel.

Anti-eviction protests have been held in Palestinian cities across the West Bank and by Arab Israelis in Haifa and Nazareth.

Salem Barahmeh, a member of the Palestinian youth movement Generation for Democratic Renewal, said Sheikh Jarrah was “mobilising young Palestinians in Palestine and all over the world.” 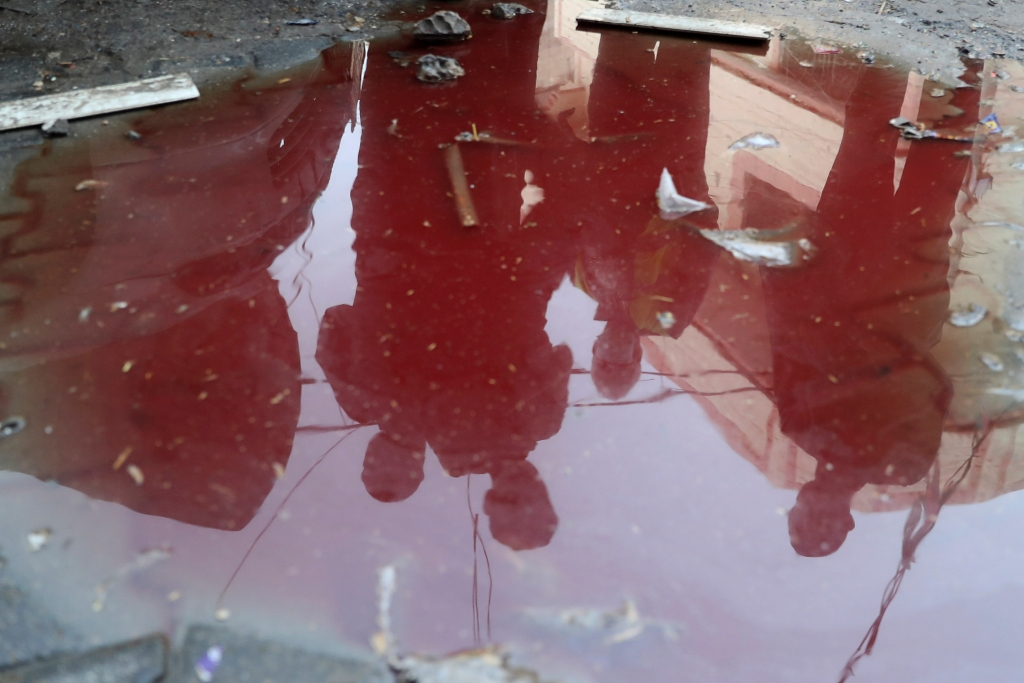 People are reflected in a puddle of water mixed with blood at the scene where Palestinians were killed amid a flare-up of Israeli-Palestinian violence, in the northern Gaza Strip May 10, 2021. REUTERS/Mohammed Salem