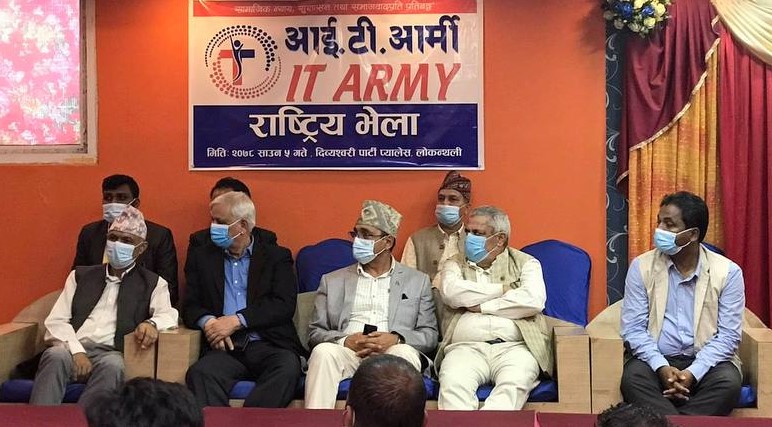 The CPN-UML party formed an ‘IT Army’ on Tuesday with the objective “to help in the liberation of oppressed people and ensuring social justice, good governance, morality, stability, prosperity as well as development in the country”.

Speaking at the launch ceremony, former minister Prabhu Shah informed that the IT Army was formed with the aim of inviting a new era through the use of information technology.

He said that the IT Army would play an important role in facing the current political crisis by fighting against malpractices, corruption and bigotry prevalent in the country.

According to Shah, the IT Army comprises of 151-member central committee under the coordination of Chandra Bhushan Sah.

The then Prime Minister KP Sharma Oli had formed the Cyber Army to counter criticisms leveled against the government led by him.

Speaking during on Tuesday, CPN-UML leader Top Bahadur Rayamajhi said that the country was in need of a counter-revolution after the Supreme Court made a political decision to appoint the new prime minister.

He said that the Supreme Court’s decision had crossed its jurisdiction and ended the legitimacy political parties, adding that the IT Army should play a role in exposing the issue to the general public.

Rayamajhi added that the IT Army will raise public awareness against perversion and anomalies; fight against corruption, anarchy, impunity and instability; be active in preventing discrimination, exploitation, oppression and harassment in the society; and promote positive actions related to good governance, morality, development and prosperity.

It is considered a form of astroturfing. This is a common practice in Asia and other parts of the world, with the rise of propaganda-sponsored trolls in India – also known as IT Cell — as the closest instance.

Since Narendra Modi came to power in India, the Bharatiya Janata Party is known for using exclusive troll disinformation to repress and monitor any opponents against his government.

Indian propaganda, both private and state-sponsored, has also attacked Greta Thunberg and Rihana in February for their Tweet that criticized Indian handling of agitating farmers.

In 2019, a European News Watchdog discovered 265 bogus media outlets in 65 countries which are managed by an “Indian influence network”. The network of fake news websites were used to target policy makers in the United States and the European Union to act against Pakistan. The aim of those websites is to spread propaganda and influence public perception on Pakistan.

In China, 50 Cent Party and Internet Water Army are the two first recognized government trolls, founded in 2004. They have changed and become increasingly radical since the 2019–20 Hong Kong protests.

In June 2020, Twitter identified and deleted over 170,000 Twitter accounts allegedly linked to a Chinese government disinformation campaign against both Hong Kong and the United States.