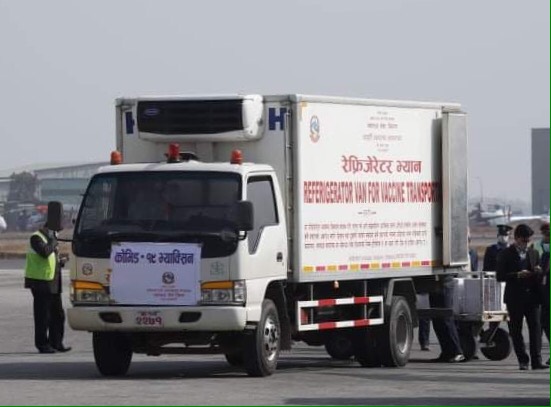 Nepal Government is all set to commence vaccination campaign against COVID-19 from Wednesday in all seven states across the country.

Minister for Health and Population Hridayesh Tripathi said that the vaccination drive will start from 10:00 am on January 27. In the first phase, the government is said to vaccinate 430,000 frontline workers.

According to the Ministry of Health, garbage collectors and drivers assigned for waste management, ambulance and hearses drivers, health workers, security personnel and volunteers deployed at vaccination centers, staffers working at international entry points, women volunteers and old age home care workers will be prioritized for the first phase of inoculation.

“The first phase of vaccination is targeted to be completed within 10 days from its commencement after vaccinating as many as 430,000 people,” said Minister Tripathi.

The Ministry of Health has not yet unveiled exactly how many people in which states will receive the vaccines. Health Minister Tripathi said that the details of vaccine candidates will be made public at respective vaccination centers.

Concerned states will be responsible for distributing the required vaccines to each district while vaccines are set to be dispatched to district hospitals of Kathmandu, Lalitpur, Kavrepalanchok, Sindhupalchowk, Dolakha, Ramechhap, Nuwakot, Rasuwa and Dhading of Bagmati district by Monday.
More than 4,000 doses of vaccines were sent to Bhaktapur on Sunday.

According to the data collected by the Department of Health earlier, as many as 218,690 people including health workers, women volunteers, cleaners, corpse management workers, ambulance drivers and staff need to be vaccinated.

The data was collected from local levels, hospitals and other organizations through the District Health Office.

“The given data might be incomplete. All the health workers working in the frontline, including the cleaners, should amount to more than 300,000 people,” said chief expert at the Ministry of Health, Dr Roshan Pokharel.

“The vaccination drive will be inaugurated by Prime Minister KP Sharma Oli on Wednesday,” said Minister Tripathi adding, “The program will start after a virtual inauguration with the participation of connecting hospitals from all seven provinces and major hospitals in Kathmandu.”

According to Minister Tripathi, vaccination drive will begin from 62 hospitals and 120 consignment centers in seven provinces and will be carried out from 300 vaccination centers across all 77 districts by January 31.