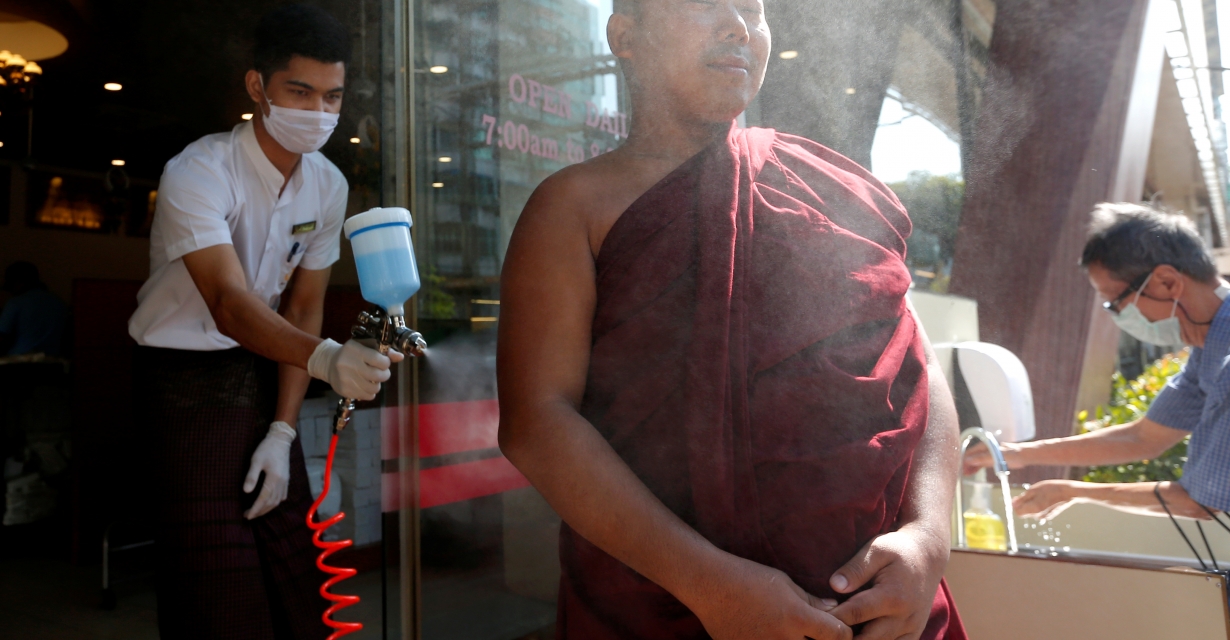 A coffee shop staff sanitizes a monk customer as a precaution due to the coronavirus disease (COVID-19) outbreak in Yangon, Myanmar March 26, 2020. REUTERS/Myat Thu Kyaw NO RESALES. NO ARCHIVES.
Coronavirus threatens Myanmar’s most vulnerable in displacement camps
Read Time: 3 minutes

An estimated 350,000 displaced people across Myanmar are “sitting in the path of a public health catastrophe”, says rights group Human Rights Watch (HRW).

Myanmar had its first infections last week and its first death on Monday.

A government official had previously claimed the country’s “lifestyle and diet” protected its people.

Myanmar, which is home to around 51 million people, has a poor healthcare system.

A large percentage of the population does not have access to even basic healthcare, Associate Professor Nehginpao Kipgen of the Jindal School of International Affairs said – much less those who are displaced.

People living in camps often struggle to get even basic access to clean water and other essential services.

Waves of communal violence in Myanmar have displaced tens of thousands of people, many from the persecuted Rohingya Muslim minority.

According to a report published on Monday by HRW, around 130,000 Muslims in Rakhine state live in open-air detention camps, with extremely restricted access to health facilities, none of which have Covid-19 testing facilities.

The report says that in such camps, one toilet is shared by as many as 40 people, one water access point by as many as 600 – making it easy for the virus to be transmitted.

It adds that these people are “effectively imprisoned… arbitrarily denied freedom of movement” and therefore unable to access public health facilities even if they wanted to.

“Overcrowding in the camps is pervasive, making physical distancing nearly impossible and significantly increasing the risk of transmission,” said the HRW report.

Myanmar’s slow response to the outbreak has been heavily criticised. As of late March, around 300 virus tests had been carried out across the country, according to Reuters news agency.

Government spokesman Zaw Htay had said the absence of cases was due to Myanmar’s “lifestyle and diet”, adding that because citizens generally paid for purchases with cash instead of credit cards, they were unlikely to spread the virus.

Myanmar now has 14 confirmed cases of the virus, mostly from people who have travelled overseas. On Monday, it recorded its first virus-related death, a 69-year-old who also suffered from cancer. He had recently travelled to both Australia and Singapore.

There are currently 859,566 confirmed cases across the world with some 42,332 deaths according to a tally by Johns Hopkins University.