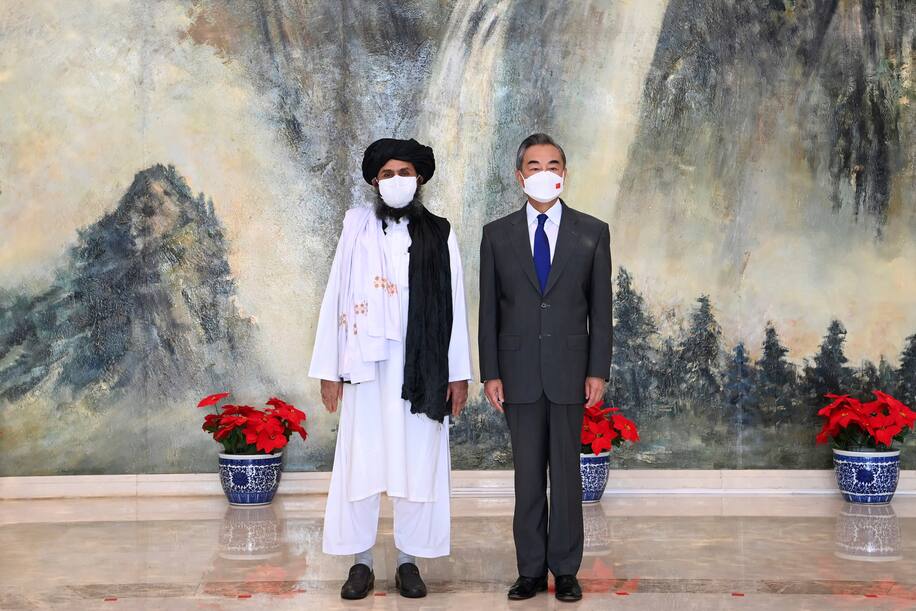 China-Taliban ties warming ahead of US withdrawal from Afghanistan
Read Time: 3 minutes

China’s foreign minister met with a delegation of high-level Taliban officials on Wednesday as ties between them warm ahead of the US pullout from Afghanistan.

A photo posted on the ministry’s website showed Wang Yi posing with senior Taliban leader Mullah Abdul Ghani Baradar and his delegation in the city of Tianjin, then sitting down to talks.

The highly conspicuous show of friendliness had the appearance of a diplomatic mission at a time when the Taliban are craving legitimacy.

He said the hasty withdrawal of the US and NATO “reveals the failure of America’s policies and offers the Afghan people an important opportunity to stabilize and develop their own country.”

While no agenda was announced for the meeting, China has an interest in pushing the Taliban to deliver on peace talks or at least reduce the level of violence as they gobble up territory from Afghan government forces.

China and Afghanistan share a narrow border high in the remote Wakhan Valley, and China has long been concerned about a possible spillover of Islamic militancy into its formerly volatile Xinjiang region.

China has also signed deals for oil, gas and copper mining in Afghanistan, although those have long been dormant.

“The Taliban are a pivotal military and political force in Afghanistan and are expected to play an important role in the process of peace, reconciliation and reconstruction,”Wang said.

China, Wang said, hopes the Taliban will put the nation’s and the people’s interests first and focus on peace talks, set peace goals, establish a “positive image” and work for unity among all factions and ethnic groups.

Wang also said China hopes the Taliban will “deal resolutely” with the East Turkistan Islamic Movement, a group China claims is leading a push for independence in Xinjiang, but which many experts doubt even exists in any operational form.

The heads of the Taliban Religious Council and the Propaganda Committee were also on the trip. The US withdrawal from Afghanistan by Aug. 31 is seen as a boon to China, Washington’s chief strategic competitor, which has long resented the presence of US troops in what it considers its own backyard.

If the Taliban do topple the US-backed central government, China could gain a strategic corridor allowing it and long-time ally Pakistan to bring further pressure against common rival India.

Baradar’s visit comes shortly after Pakistan’s foreign minister and intelligence chief made their trips to China.

Pakistan is seen as key to peace in Afghanistan. The Taliban leadership is headquartered in Pakistan and Islamabad has used its leverage, which it says is now waning, to press the Taliban to talk peace.

While the Tianjin meeting could be seen as a snub at the US, Washington has been meeting with China and Russia to produce statements calling on the Taliban to enter into a peace deal.

Zalmay Khalilzad, Washington’s point person in talks aimed at ending decades of war in Afghanistan, also made a brief visit to Pakistan earlier this month as relations between Islamabad and Kabul reached a new low.

That has fed perceptions that the US is engaged in stepped-up efforts to obtain a peace deal ahead of the Aug. 31 deadline that also includes China.