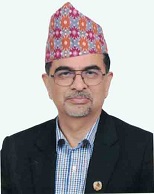 The Chief Minister of Bagmati Province, Rajendra Pandey, is taking the vote of confidence in the Provincial Assembly on Monday.

According to Bagmati Province Assembly Speaker, Sanu Kumar Shrestha, the provincial assembly meeting has started at 3:00 pm today and the process to take the vote of confidence will be initiated in the same meeting.

“All the processes related to taking the vote of confidence will be complete today if time allows. Otherwise, the remaining process will be carried out tomorrow”, he informed.

It is noted that the CM would expand the cabinet once receiving the vote of confidence. Earlier, CM Pandey had formed a four-member cabinet after he was appointed as the chief minister on October 28.

Meanwhile, Bibekshil Sajha Party-Nepal (BSP-N) has announced not to give a vote of confidence to CM Pandey.

The parliamentary party leader Ramesh Poudyal has shown dissatisfaction against the decision to split the ministries of the province to provide a ministry for selected members of coalition parties.

Even then, there is a high chance that Pandey, who requires 55 votes to win the confidence of the Assembly will avail the votes as the ruling coalition has 59 votes.