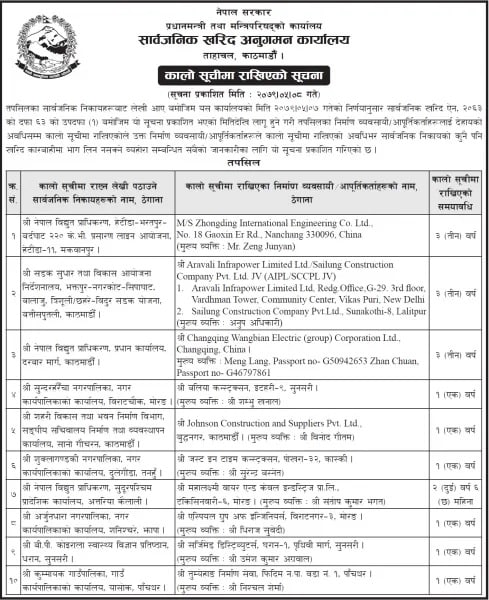 The government has blacklisted 10 contracting companies for not completing contracted work on time and ignoring repeated notices. The Public Procurement Monitoring Office, under the Office of the Prime Minister and Council of Ministers, has issued a public notice on Wednesday informing ten construction companies, including two Chinese companies, have been blacklisted and they cannot participate in any new procurement process.

A list has been made public with action taken against the companies that failed to complete the contracted work on time and increasing the construction cost by delaying the work.

In the list is also Shailung Construction Company, owned by Sharada Prasad Adhikari, landlord of Nepal Communist Party (Maoist Centre)’s Chairperson Pushpa Kamal Dahal (Prachanda). According to the information released on Wednesday, the company will be banned for 3 years. The notice is published amid accusations that Prachanda has been protecting Shailung Construction Company despite repeated failures to deliver on time.

Shailung Construction is notorious for delaying completion of projects. The company was awarded the upgradation/repair of certain stretches of the Pasang Lhamu Highway en route to the Banchare Danda Landfill Site, whose lack of timely completion and its subsequent impact on managing waste was highlighted by KMC Mayor Balendra Shah (Balen) recently.

Every year, during monsoons, KMC’s waste management is obstructed due to lack of upkeep of roads. One of the demands of the protesting communities in Sisdole and Banchara Danda has been completion of the project.

Besides Pasang Lhamu Highway, other examples of delayed projects by Shailung Construction are the Nagarkot Road Expansion Project and melamchi pipeline expansion and construction of overhead tanks.