Singh, his family members, and their sacrifices
Read Time: 4 minutes

When living in exile, I used to live alone – far away from home, and my family members. I didn’t want my family members to suffer because of my political pursuits – however, time and again, sacrifices would be inevitable.

At a time when my children should be growing up with their parents – I was away – either in jail, or in exile. Mangala Devi had to shoulder the responsibility of being both parents to our children. Neither she, nor the children would complain.

At times, during holidays, Mangala Devi and the children would come visit me. We would visit nearby areas, and return home. I used to look forward to those visits. Similarly, Kanta and Mita, who were studying in Rajasthan, would stop by at Gorakhpur and spend a few days with me before returning to Kathmandu for their vacation. In between picking them up from the station, and dropping them back to the station, I would not realize that the days had passed so quickly.

Pradip and Prakash’s scholarships are cancelled

At the time, all of our children were studying – our eldest daughter Rita was completing her M.A. in History from Tribhuvan University, Kanta and Mita were studying eldest son Pradip was preparing for his B.A, and Prakash too had just completed his I. Sc.

I remember Pradip being a little disheartened. Pradip and Prakash, both of them who aspired to be pilots, had won Canadian government scholarships respectively to train for their aviation courses. They had both won via a free competition, and based solely on merit. All formalities were completed, and all that remained was to fly out. So much so, their friends and family members had already thrown “farewell parties”.

However, just one day ahead of their scheduled departure, His Majesty’s government prevented them from departing Nepal. No reason was given – and all that could be understood was they had to pay the price of being the sons of Ganesh Man Singh.

My two sons, who had won a scholarship based on their individual efforts and merit, and were on their way to create their own future, had to sacrifice the opportunity due to their father’s name. It was unfair to them.

Pradip, who took the incident by heart, did not study science further – he went on to study B.A. Prakash, went ahead and studied B Sc in Tri Chandra College. 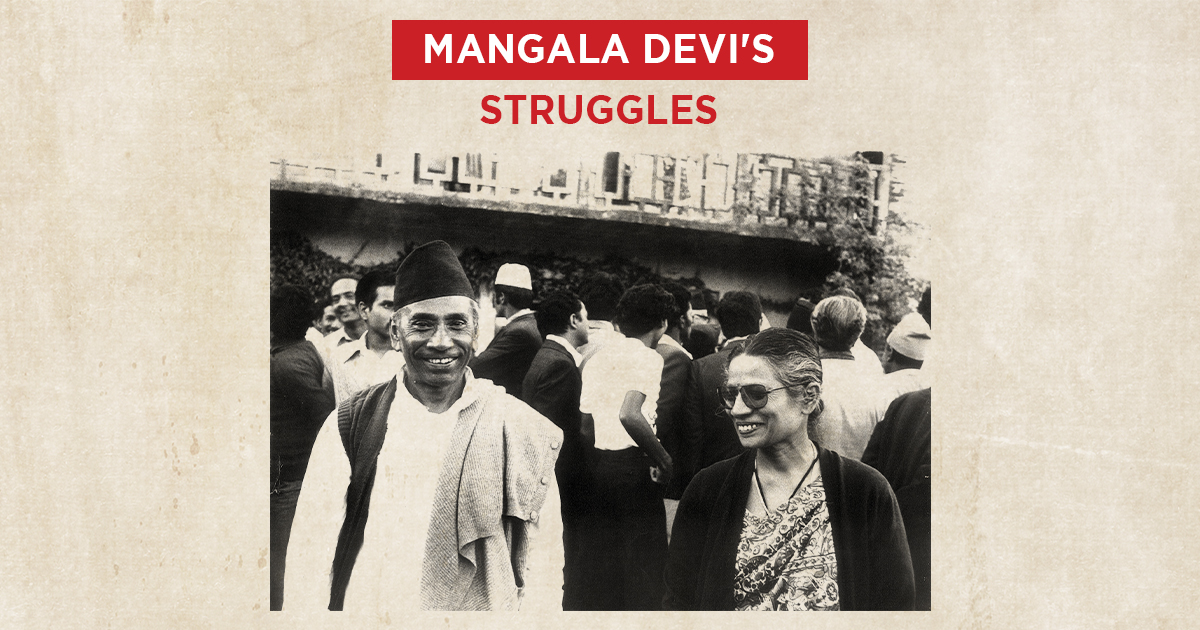 Meanwhile Kanta and Mita were studying in Sophiya College, Rajasthan. Kanta was pursuing a course in Textile Designing. Mita was studying her I Sc and wished to be a doctor. The entire financial load of the family, and our children’s education was on Mangala Devi.

Due to limited financial circumstances, Mangala had to spend all her jewelry, which she had received from her parents and my grandparents on the children.

Similarly, P L Singh, who had stood by the family during their difficult years, was of a great help to Mangala, and to me and the children. His help is unforgettable, and I will always be grateful to P L Singh.

At the time, when I was supposed to return to Kathmandu – I constantly debated if I should call them out to India one last time. Returning to Kathmandu implied uncertainty, and I wished to see them one last time if anything was to happen to me in Kathmandu. However, since all children were busy with their exams and preparations – I decided against it.

I had discussed this issue with Mangala Devi too – and she too was of the belief that the children should not visit me at the time. Mangala was a strong woman – she took our decision to return to Nepal with amazing strength.

Mangala’s always been a source of strength – even when I was in jail in Sundarijal, she had stepped up to her responsibilities. At the same time, she remained equally committed to her political aspirations too.

After my mother’s demise too, when I was away and could not come home for her last rites, she, along with the assistance of brother Dev Shanker had managed everything.

Preparations for return to Kathmandu underway after return date finalised