One day, Gangalal arrived hastily at Ganesh Man’s house – under his shawl he was hiding the typewriter used to print the Prajaparishad leaflets. News was circulating that police had searched Dharmabhakta’s home. Gangalal suspected police would search his home too, therefore had got the typewriter to hide it somewhere.

“What should I do Ganeshman Ji”, Gangalal asks. Ganeshman advises against the idea of fleeing. Bidding goodbye, Gangalal heads towards his home while Singh to his own. Gangalal too is arrested.

Police however do not come to Ganesh Man Singh’s home the same night. The next day he finds out almost all members of Praja Parishad including Tanka Prasad Acharya, Govinda Prasad Upadhyaya, Bal Bahadur Pandey, and Pushkarnath Upreti were arrested.

On the third night after the arrests were made, police arrived at Ganesh Man’s residence too. Out of respect for the Badakazi, they limited their search to Ganesh Man’s room only – they found him in possession of the book ‘Russian Revolution’ and a manuscript of short stories by Gangalal. He too was held. 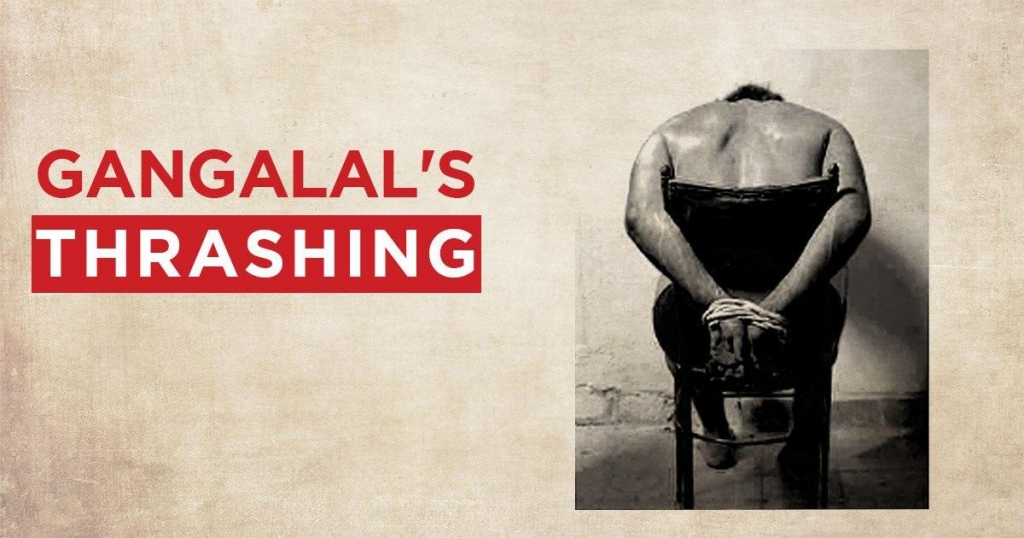 A day after Ganesh Man Singh was brought in, Gangalal’s interrogation was held. Harikrishna, who was witness to the entire episode, was visibly affected and recounted the following details to other members of the Praja Parishad.

The guards were holding a leaflet. They first questioned Gangalal whose handwriting it was. Gangalal denied any knowledge about it. The guards then repeated the question to Harikrishna – Harikrishna immediately recognized Gangalal’s signature, however, he too denied any knowledge about the leaflet. After approximately five rounds of questioning, a visibly frustrated Narashumsher landed a blow on Gangalal’s face.

“Gangalal was knocked towards one side, and his spectacles flew to the other”, Harikrishna recounted.

Narashumsher then ordered the guards to beat Gangalal – the guards dragged Gangalal to the courtyard, tied him to a bamboo pole and caned him mercilessly. Harikrishna was witness to the entire episode.

Ganesh Man recollects meeting Gangalal the next day – he tells Mathbar Singh that ‘Gangalal’s face was swollen like a clay pot, his body was swollen black and blue, and there were bloodstains all over his clothes’.

As Ganesh Man approached him, Gangalal first looked around to see if there were any guards nearby, and then said,

“Ganesh Man dai, do not give up dharma. I have told them nothing, you should also adhere to dharma”.

Eventually, Ganesh Man’s turn for interrogation too arrived. In the room Narashumsher pounced upon Singh, calling him a goonda.

As the interrogation continued, Narashumsher, who was unable to extract information from Gangalal, landed a huge blow on Singh. Singh, although taken aback, reeled back from the blow. This got Narashumsher further angered. He then ordered a beating for Ganesh Man, and exited the room.

Ganesh Man’s interrogation continued the next day too – this time they tried a softer approach. They cajoled Ganesh Man for information claiming Dharmabhakta had already told them everything.

Ganesh Man did not reveal any information – so was his Dharma (pledge).

Marriage with Mangaladevi and more about the Praja Parishad 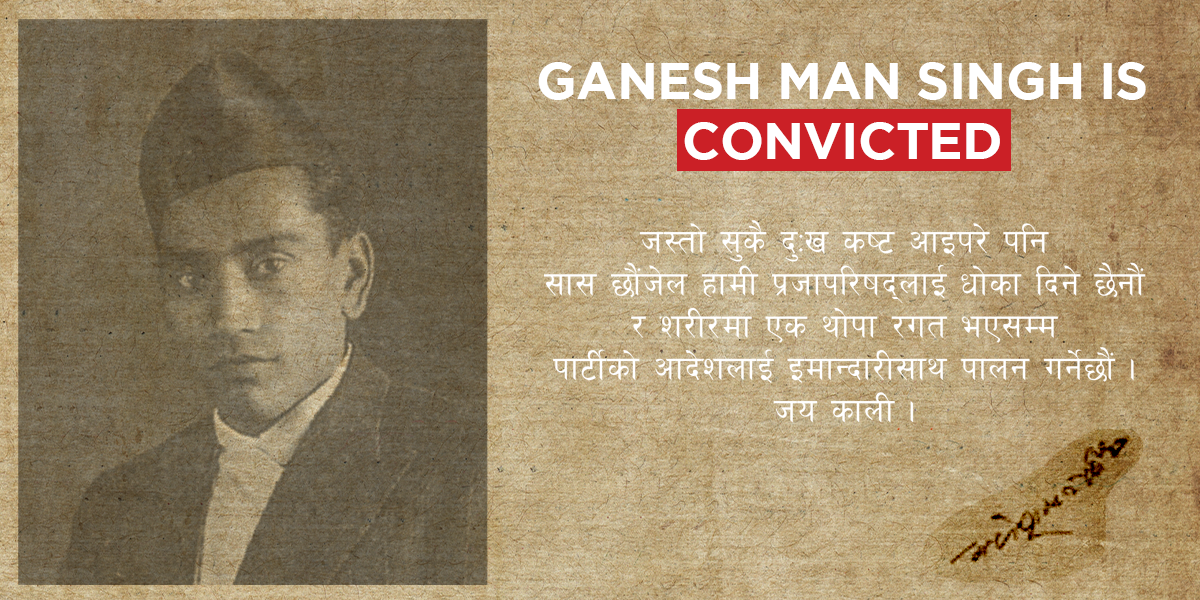