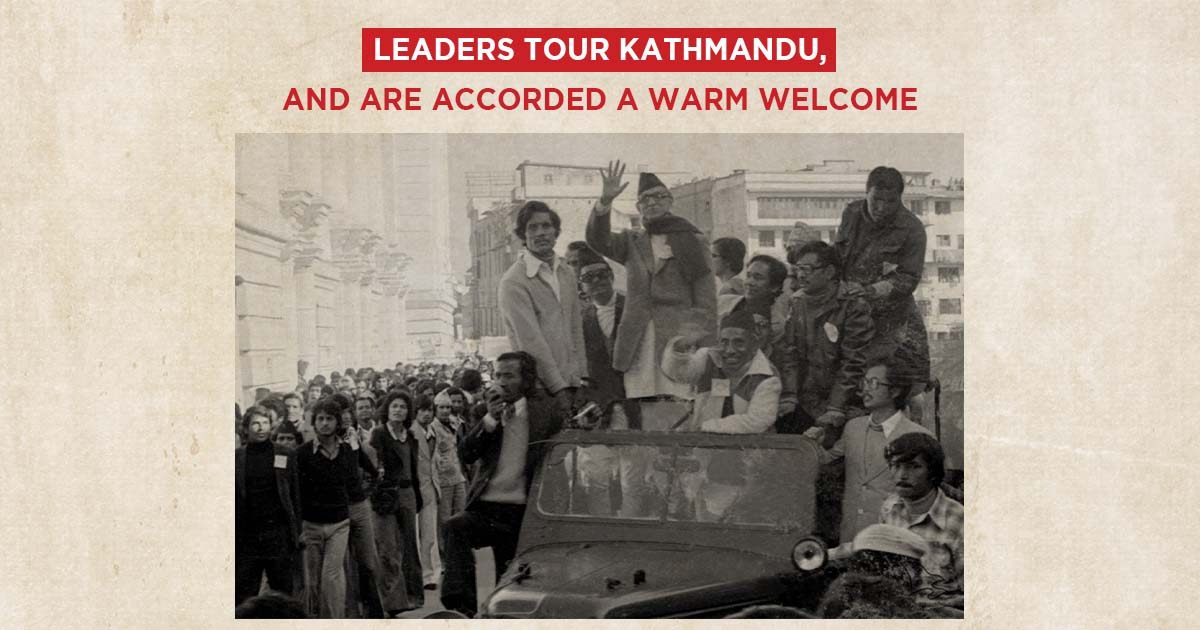 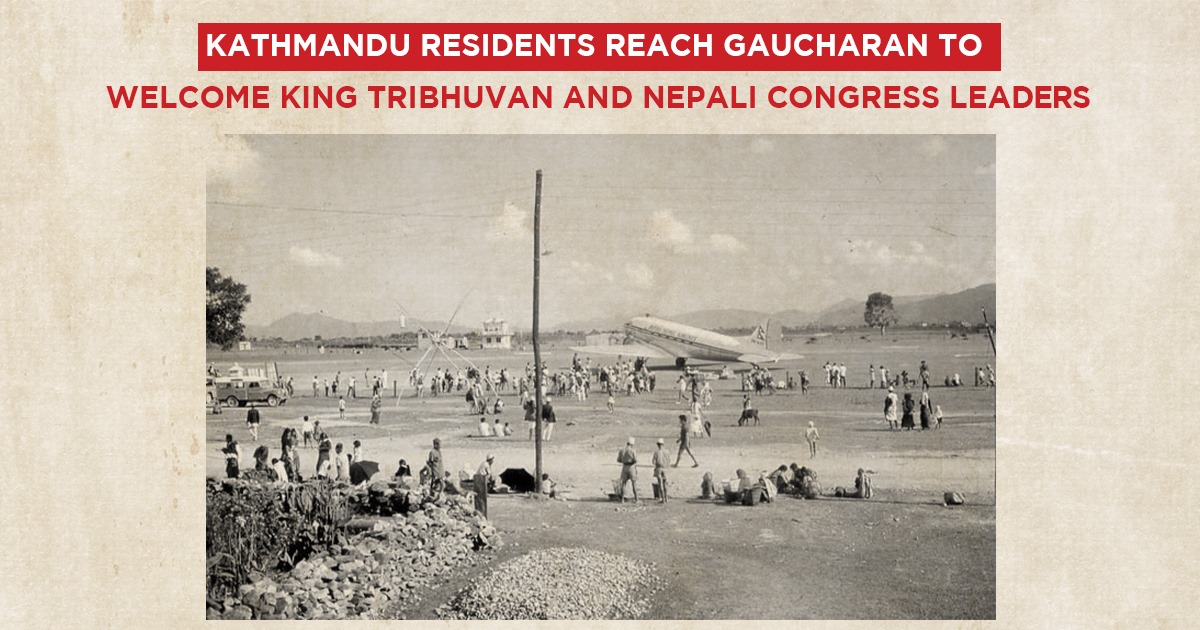 Finally the day had arrived – there was a festive spirit in the streets of Kathmandu. People were preparing to welcome King Tribhuvan Bir Bikram Shah Dev and leaders of Nepali Congress home.

The people of Nepal revered their king, and were sympathetic towards him because he had to abandon his palace and leave for India. They were excited to watch him return home. Valley residents were also respectful of the leaders who had been fighting for Nepal’s democracy in various fronts – and were ready early in the morning to head towards Gaucharan (modern day Tribhuvan International Airport).

At the time, Gaucharan wasn’t a fully fledged airport. The vast piece of unused land was hastily developed into an airstrip on the occasion of the marriage of Shree Teen Padma Shumsher’s granddaughter. The chief engineer for developing the airstrip was Jayan Bahadur Pradhan. The airstrip was flattened and developed after he deemed Gaucharan fit for aircraft to land.

It was the  4th of Falgun, 2007 B.S. and was a nice and warm day. The clouds were clear, and the sky was blue. Thousands of people from Kathmandu, Bhaktapur, and Lalitpur had arrived in Gaucharan to welcome their king and their leaders.

They had wished to visit their respective fronts and pay their respect to the fighters of the Liberation Army before coming into Kathmandu. Thus, the Koiralas headed to Biratnagar and Subarna Shumsher to Calcutta, before meeting in Patna to fly back to Kathmandu.

King Tribhuvan and leaders of Nepali Congress land in Kathmandu: 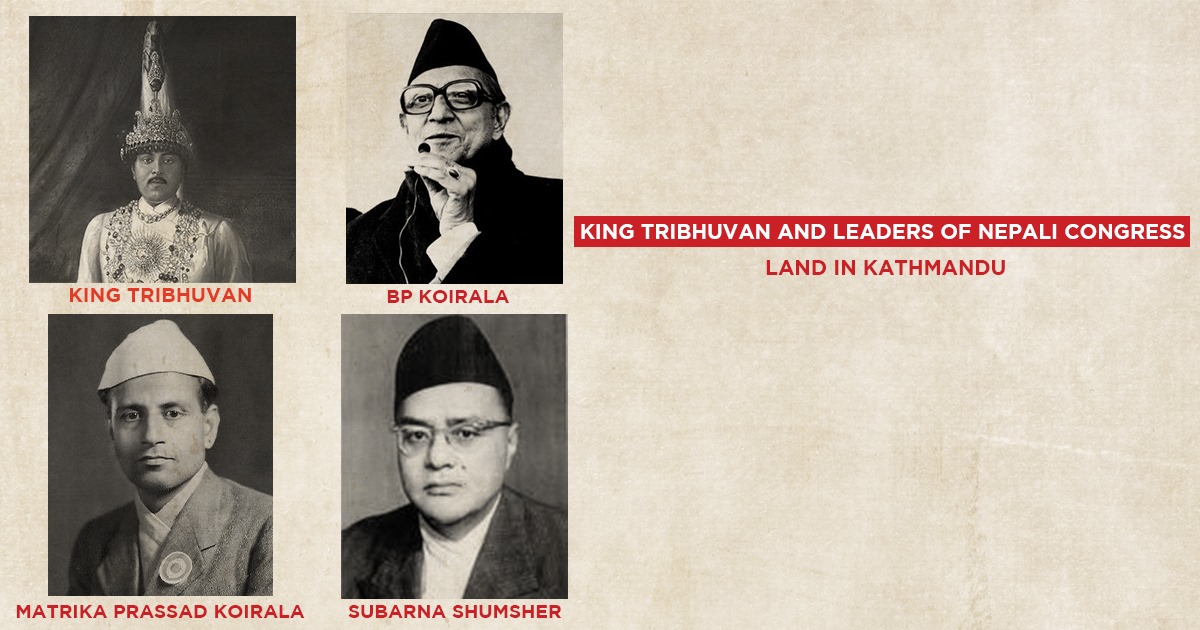 At 2 p.m., the first plane landed in Gaucharan. From that plane, King Tribhuvan and his family members alighted as the crowd of people cheered for their king. Mohan Shumsher, who was present to welcome the king, accompanied by Ganesh Man Singh and the Indian Ambassador to Nepal Chandeshwor Prasad Narayan Singh went ahead to welcome the king and his family.

After an introduction by the ambassador, Singh and King Tribhuvan exchanged pleasantries.

“I hadn’t had a personal introduction to the King, and I was happy to meet him. I had great respect for the King, and I paid my respect to him. He was also happy to see me, and asked about my well being”, Singh shared with Mathbar Singh.

The king was then ushered away, but before departing said to Singh that they would meet later. The king, the Shree Teen Maharaja, and the ambassador departed from the airport. In the distance, a canon could be heard booming in honour of the king’s arrival.

While some of the crowd left with the king, most of them waited for the next plane to arrive.

Exactly at 2:30 p.m. a plane could be seen on the southern horizon of Kathmandu. The crowd’s excitement was re-ignited.

Singh and his friends welcomed the trio along with other leaders of Nepali Congress who were aboard the aircraft. Meanwhile, the crowd was starting to become uncontrollable and Singh started leading them towards the awaiting vehicles.

A separate car had come to pick up Subarna Shumsher, but on the insistence of Singh and Koirala, Subarna Shumsher rode in the same car in which B P Koirala, Matrika Koirala and Ganesh Man Singh were supposed to travel in.

Leaders tour Kathmandu, and are accorded a warm welcome:

As the jeep made its way out of Gaucharan, the people continued to cheer. Throngs of people stood in the sidewalks, according the leaders with a warm welcome. The jeep proceeded to Baneshwor via Sinamangal, then to Dilli Bazar, Putali Sadak, Bag Bazar, Rani Pokhari, Bhotahiti, Ason, Indra Chowk, and then to New Road before proceeding towards Subarna Shumsher’s home – Lalita Niwas.

At all major junctions, there were arched gates with welcome messages for the leader. People cheered throughout their tour.

The sun was beginning to set after the jeep departed New Road. The crowds were beginning to subdue and Singh caught a wonderful glimpse of Rani Pokhari. He noticed the fencing around the pond, and was briefly saddened.

“We used to play in the pond when growing up. There were no fences. However, on days when gambling used to be allowed, a lot of people who lost their properties started committing suicide by drowning in the pond. Therefore Juddha Shumsher ordered a fence to be built around the pond”, Singh shared with Mathbar Singh as a side thought amidst all the celebrations.

Before heading to Baluwatar, the leaders stopped at the house of the father of martyr Thir Bam Malla. B P Koirala and Matrika Prasad Koirala were supposed to stay at his house for a couple of days. After dropping them there, Singh proceeded to drop Subarna Shumsher .

After dropping Subarna Shumsher, Singh visited Mahabir Shumsher before heading home. He was also supposed to take Krishna Prasad Bhattarai home as he was to reside with Singh.

On his ride back home, Singh noticed Kathmandu was beautifully illuminated, and adorned a festive spirit.

“The city was observing the advent of democracy”, Singh shared.

Singh reflects upon his political journey

Final days before the establishment of democracy in Nepal