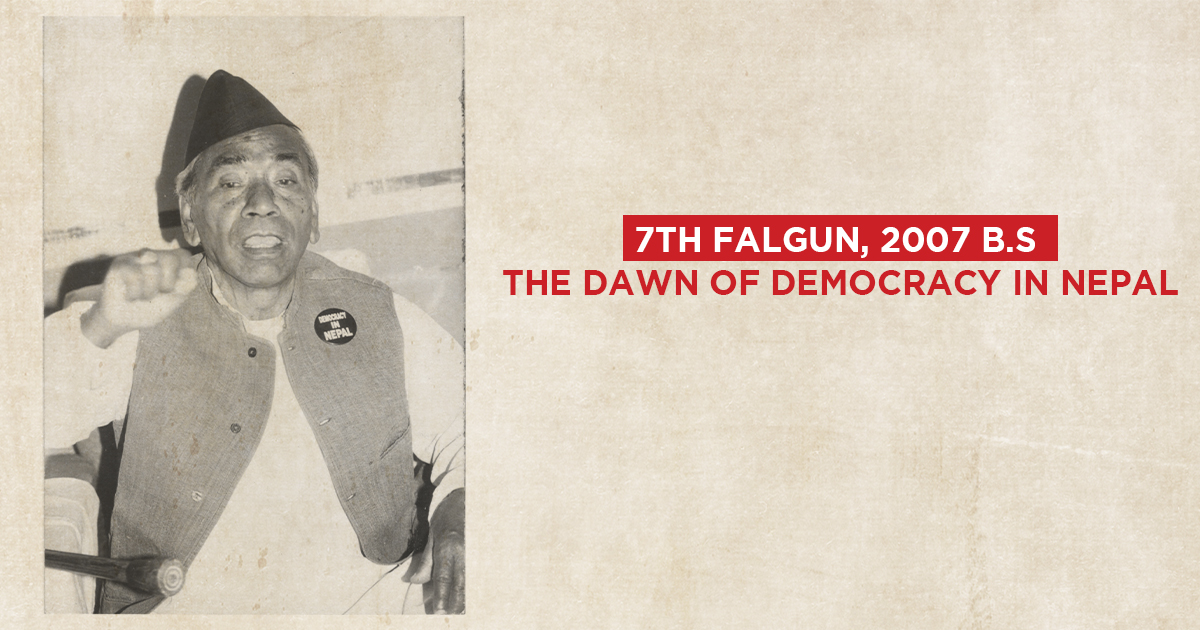 Ganesh Man Singh was born on the day after Bhai Tika in 1972 B.S. at Yetkha – some 200-300 metres north of the historical Hanuman Dhoka Palace. During his birth, Nepal was under the iron-fist rule of the Ranas with Chandra Shumsher as its Prime Minister.

As we have explored in this Democracy Series in the past 41 weeks, Singh, who in his early years was a care-free youth slowly started developing an interest in Nepal’s political structure. Though early experiences with the Ranas had already instilled within him a sense of dissatisfaction with the Ranas, his political association only began with the Praja Parishad and its members – namely Dharma Bhakta Mathema, Gangalal Shrestha and Shukraraj Shastri. His political inclinations got him arrested, tortured, and jailed – but his resolute was strong.  After successfully escaping from jail Singh continued his political pursuits. His journey took him from the hills of Nepal to its plains and then to different cities in India until the formation of Nepali Congress of which he was an integral force. After the formation of Nepali Congress, he made a daring journey back to Nepal to launch a revolution, but was arrested again.

All his political endeavours (along with millions of other Nepalis) were to bear fruit on this day – on 7th of Falgun, 2007 B.S. On this day King Tribhuvan was going to make a historic proclamation effectively ending the 104 year long Rana rule over the kingdom of Nepal.

“The morning of 7th Falgun, 2007 B.S. was not a usual morning. The early rays of the winter sun brought a new ray of hope – the shadow of the Rana rule was about to end in Nepal. May be that was the reason the early morning mist over Kathmandu Valley did not stay for long. The mist began to thin in the early hours as the sun peeped though. The sky became clear and it seemed the whole of Kathmandu was beaming with joy”, Singh shared with Mathbar Singh.

Ganesh Man Singh reflects upon the Rana Regime (I): 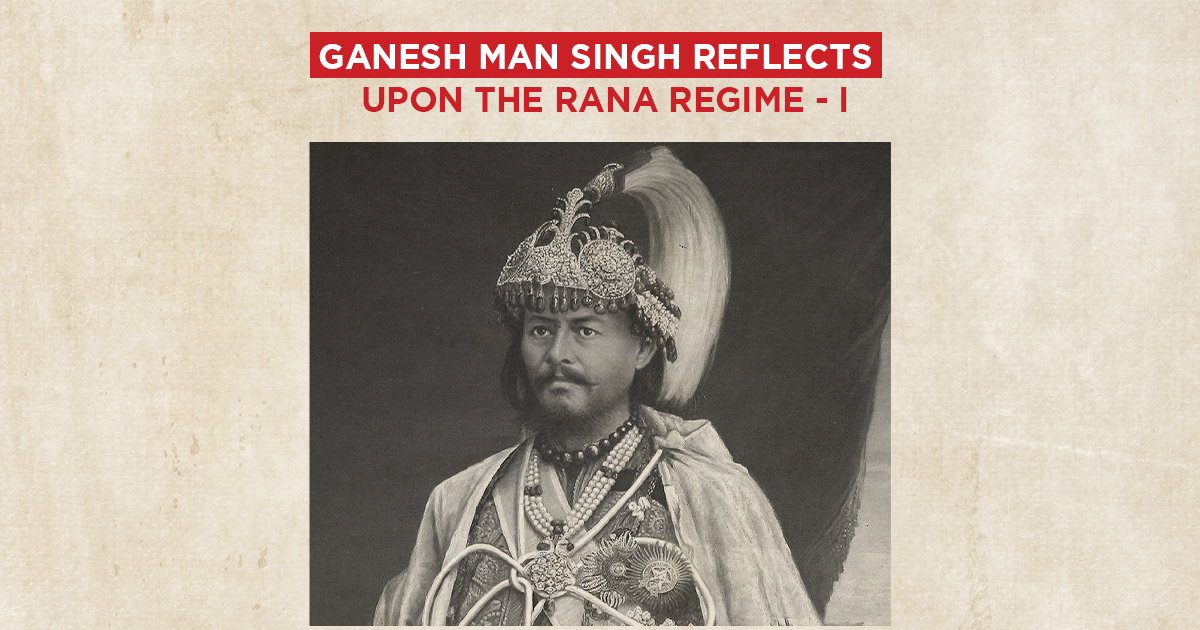 Much of Democracy Series has been excerpted from the autobiographic memoir of Ganesh Man Singh titled ‘Mero Kathako Panaharu’ – as told to Mathbar Singh. Singh would share his life experiences with Mathbar Singh.

At this juncture, when Singh arrives upon the dawn of democracy in Nepal, he shares a deep political insight about the rise and the fall of the Ranas with Mathbar Singh – and makes a political commentary which is worth noting.

Junga Bahadur Kunwar had gained notoriety within Nepal’s political spectrum much before the 31st Bhadra, 1903 B.S. Kot Massacre – owing to the ‘cold-blooded’ murder of his own uncle Mathabar Singh Thapa. Kot Massacre may have enabled him to become Nepal’s Prime Minister, but him being able to enable a system of hereditary Rana Prime Ministership  can be attributed to Nepal’s own domestic political instability and shifting international politics of the time – of which Jung Bahadur was smart enough to capitalise from.

China engulfed in its own internal crisis could not care much for Nepal’s politics and Jung Bahadur’s timely extension of help to the British helped establish Nepal as an ally of Britain. Meanwhile, Nepal’s royal palace was embroiled in its own political tensions – Jung Bahadur, through political maneuvers was able to get King Rajendra Bir Bikram Shah Dev to abdicate the throne in favour of his eldest son Surendra Bir Bikram Shah Dev. Through Surendra, in 1903 B.S. he was able to get a Panja Patra (palm-print letter) which, by royal decree, allowed the descendants of Jung Bahadur to become successive Prime Ministers of Nepal.

To formalize the power transition, King Tribhuvan first had to get the palm-print authority. And it was necessary for him to announce that he had assumed the power of the palm-print, and therefore proclaim the end of the Rana rule. 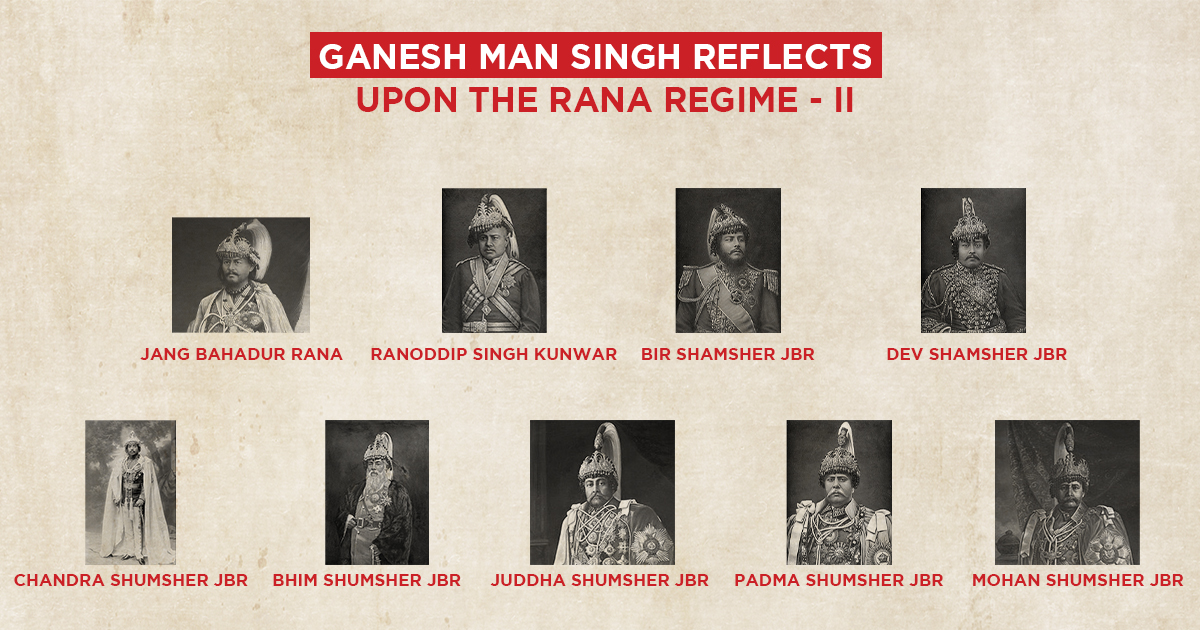 After the death of Jung Bahadur, Ranodip Singh Kunwar became the next Prime Minister of Nepal. He however was assassinated in a coup d’état paving way for Bir Shumsher to become Nepal’s next PM. Bir Shumsher upset the roll of succession to include only the 17 brothers. They also added the name Jung Bahadur to their names, with the abbreviated form of JBR.

Then came Dev Shumsher, who was deposed by his brothers and sent into exile in India, and was succeeded by Chandra Shumsher. The rule of Chandra Shumsher is regarded as the acme of success of the Rana regime. Under his rule, Nepal’s  newspaper Gorkhapatra was established, and Chandra Shumsher also founded Tri-Chandra College.

After Juddha Shumsher, Padma Shumsher came into power – considered a weak ruler, he was forced to abdicate in favour of his cousin Mohan Shumsher, the last Rana Prime Minister of Nepal.

Drawing on the rule of the Rana dynasty, and taking examples of the French and the Russian Revolution, Ganesh Man Singh speaks to Mathbar Singh about the importance of a ‘peaceful transition of power’.

“The Ranas had seized power through the might of the sword, not the will of the people. Therefore, they had to forever resort to might to maintain power. But ultimately, the will of the people prevails. Take for example the French Revolution – as the King had closed the door to a peaceful transition of power, the Revolutionaries had to force open that door. Take for example the Russian Revolution, it eventually came to an end because Lenin did not include democratic reforms in Russia”, Singh shares shedding importance on the importance of “peaceful transition of power for the sustainability of democracy”. 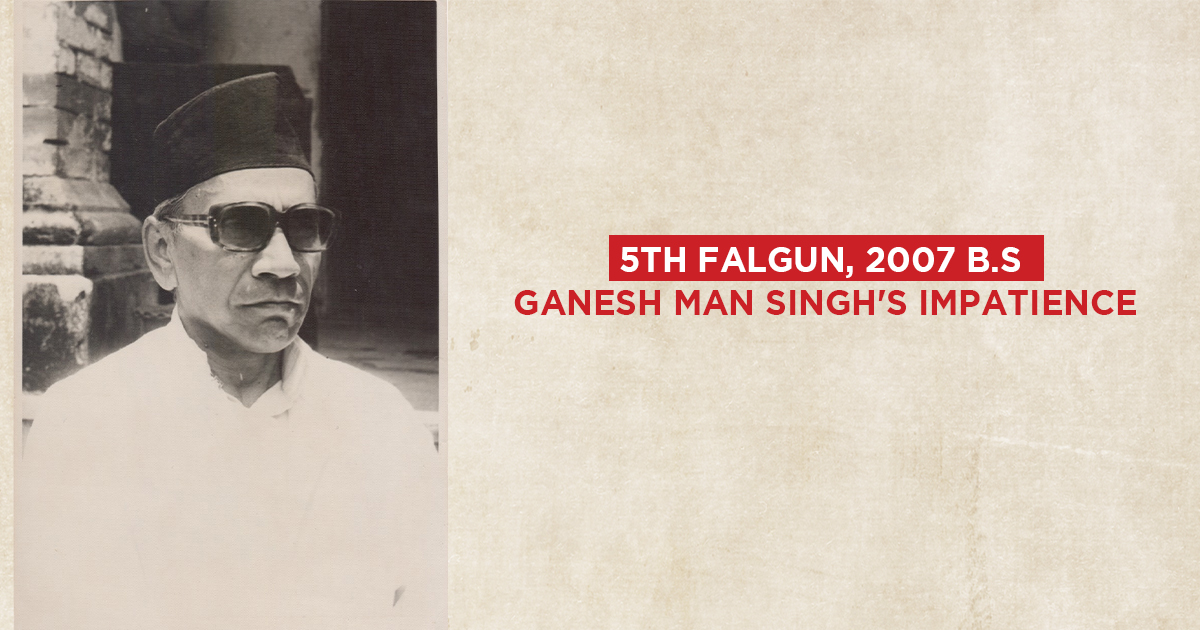 Final days before the establishment of democracy in Nepal 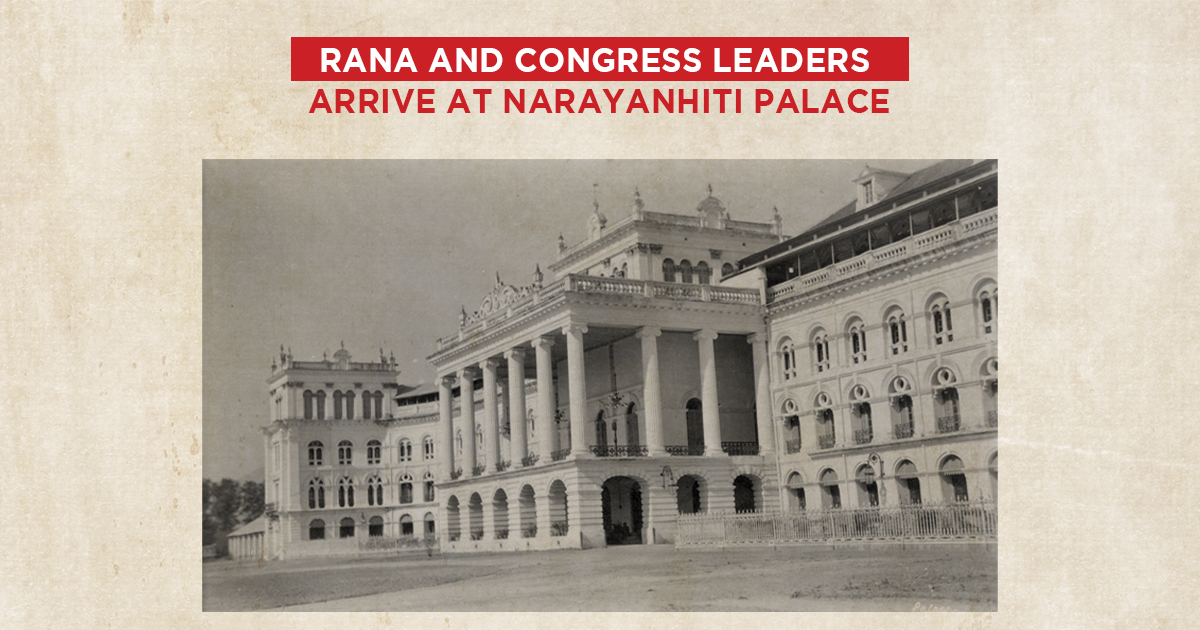